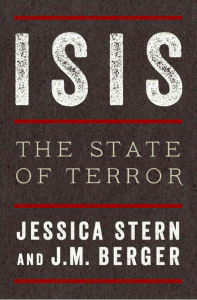 A principal difference from the Weiss and Hassan study is that Stern and Berger explore in much greater depth the way ISIS is really such a modern phenomenon with the strategic ways it has exploited modern communication technologies, especially social media. I first heard the expression “barbarism empowered by modern technology” as a graduate student to refer to the Nazi machine of World War 2. ISIS is reverting to the most primitive forms of barbarism but empowering that barbaric message through modern communications technology. Beheadings have been historically employed as a “mercifully” swift means of execution; not for ISIS where some deliberately seek out blunt knives to do the job. The object is to strike fear, of course, as well as demonstrate to idealistic potential recruits just how serious they are. Bizarrely bloodthirsty messages are somehow mixed with video shots of an ideal visionary society, a caliphate where children are happy (even if playing with decapitated heads on corpse-lined streets) and the true ways of Allah ensure a purified “utopia”. Gone are the defeatist messages of the old terrorists like Al Qaeda with their expectations of being overwhelmed by godless forces and hopes for a future paradise. The heavenly kingdom is here now; the jihadists are strong and terrifying in their strength. That is their message and that is what makes them different from other terrorist groups. END_OF_DOCUMENT_TOKEN_TO_BE_REPLACED

I always dreamed of coming to Bali and getting locked in as a result of a volcanic eruption that would not allow my flight to return to Australia. But catching a cold while stuck here was definitely not part of that plan. Since the pace has slowed, however, I have time to post a few more scenes:

A procession to a local temple:

One does expect a little better from someone who makes a living out of biblical studies and even charges audiences for his scholarly wisdom.

There was not a Jew on the planet who thought the messiah was going to be crushed by his enemies — humiliated, tortured, and executed.  That was the *opposite* of what the messiah would do.  To call Jesus the messiah made no sense — i.e., it was nonsense – virtually by definition.

That’s according to Bart Ehrman in a recent blog post, Jesus and the Messianic Prophecies.

Has Bart Ehrman not yet caught up with the scholarship of a prominent Jew on early Jewish beliefs, Daniel Boyarin?

Or worse yet, the even earlier work of a most prominent Christian scholar, Martin Hengel? END_OF_DOCUMENT_TOKEN_TO_BE_REPLACED