Daniel Boyarin is a Jewish scholar of some repute. His work is worth consideration alongside what often amounts to little more than Christian apologetics thinly disguised as disinterested scholarship. In The Jewish Gospels: The Story of the Jewish Christ Boyarin argues that the Christian belief in a suffering messiah who atones for our sins was far from some bizarre offence to Jews but in fact was itself an established pre-Christian Jewish interpretation of the books of Isaiah and Daniel.

Morton Smith’s argument is that the offence of the cross was Paul’s claim that it meant the end of the law, not that the messiah had been crucified.

“But what about Paul writing to the Corinthians about the cross of Christ being an offence to the Jews?” you ask. And in response I will step aside and allow a professor of ancient history at Columbia University, Morton Smith, to explain that most Christians have badly misunderstood that passage: see Was Paul Really Persecuted for Preaching a Crucified Christ?

So this post will look at Daniel Boyarin’s argument for the very Jewish (pre-Christian) understanding of the suffering messiah.

The idea of the Suffering Messiah has been “part and parcel of Jewish tradition from antiquity to modernity,” writes Boyarin, and therefore the common understanding that such a belief marked a distinct break between Christianity and Judaism is quite mistaken.

The evidence for this assertion? This post looks at the evidence of Isaiah 53. (Earlier posts have glanced at Boyarin’s discussion of Daniel in this connection.) Christians have on the whole looked at Isaiah 53 as a prophecy of the suffering Messiah. Fundamentalists have viewed the chapter as proof-text that Jesus is the Christ (Messiah). Jews, it has been said, reject the Christian interpretation and believe the passage is speaking metaphorically about the people of Israel collectively. Before continuing, here is the passage itself from the American Standard Version: 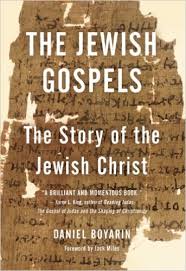 53  Who hath believed our message? and to whom hath the arm of Jehovah been revealed?

2 For he grew up before him as a tender plant, and as a root out of a dry ground: he hath no form nor comeliness; and when we see him, there is no beauty that we should desire him.

3 He was despised, and rejected of men; a man of sorrows, and acquainted with grief: and as one from whom men hide their face he was despised; and we esteemed him not.

4 Surely he hath borne our griefs, and carried our sorrows; yet we did esteem him stricken, smitten of God, and afflicted.

5 But he was wounded for our transgressions, he was bruised for our iniquities; the chastisement of our peace was upon him; and with his stripes we are healed.

6 All we like sheep have gone astray; we have turned every one to his own way; and Jehovah hath laid on him the iniquity of us all.

8 By oppression and judgment he was taken away; and as for his generation, who among them considered that he was cut off out of the land of the living for the transgression of my people to whom the stroke was due?

9 And they made his grave with the wicked, and with a rich man in his death; although he had done no violence, neither was any deceit in his mouth.

10 Yet it pleased Jehovah to bruise him; he hath put him to grief: when thou shalt make his soul an offering for sin, he shall see his seed, he shall prolong his days, and the pleasure of Jehovah shall prosper in his hand.

11 He shall see of the travail of his soul, and shall be satisfied: by the knowledge of himself shall my righteous servant justify many; and he shall bear their iniquities.

12 Therefore will I divide him a portion with the great, and he shall divide the spoil with the strong; because he poured out his soul unto death, and was numbered with the transgressors: yet he bare the sin of many, and made intercession for the transgressors.

[W]e now know that many Jewish authorities, maybe even most, until nearly the modern period have read Isaiah 53 as being about the Messiah; until the last few centuries, the allegorical reading was a minority one.

Aside from one very important — but absolutely unique — notice in Origen’s Contra Celsum, there is no evidence at all that any late ancient Jews read Isaiah 52-53 as referring to anyone but the Messiah. There are, on the other hand, several attestations of ancient rabbinic readings of the song as concerning the Messiah and his tribulations. (p. 152)

In the Palestinian Talmud there is an amoraic [i.e. from between 200 and 500 CE] passage (Sukkah 5:2 55b) discussing the meaning of a verse in Zechariah:

One opinion expressed is that this refers to the Messiah — that is, that the land will mourn over the Messiah. (The other view is that it refers to the death of sexual desire in the messianic age.)

Other traditions appear in the Babylonian Talmud from a later period (300 to 600 CE) “but very likely earlier” (p. 153). One of these is from Sanhedrin 98. The question is there asked “What is the Messiah’s name?” Different rabbis offer various answers.

After several views, we find: “And the Rabbis say, ‘the leper’ of the House of Rabbi is his name, for it says, ‘Behold he has borne our disease [the word here means ‘leprosy’], and suffered our pains, and we thought him smitten, beaten by God and tortured’ [Isa. 53:4].”

So here we find Jews interpreting Isaiah 53 as a prophecy of the vicarious sufferings of the Messiah.

Boyarin then mentions that on the previous page in the Talmud is a scene of the Messiah sitting among the diseased and poor at the gates of Rome, and understanding that he has a saving role to perform for these wretched sufferers by identifying with them.

One more passage is brought forth as a witness although Boyarin advances it with some caution. It is known only from “a polemic Testimonia (of a thirteenth-century Dominican friar)”. If genuine, it would be evidence that from the third century that rabbis interpreted the Suffering Servant of Isaiah 53 as the Messiah who must suffer to atone for sins. This is the passage:

Rabbi Yose Hagelili said: Go forth and learn the praise of the King Messiah and the reward of the righteous from the First Adam. For he was only commanded one thou-shalt-not commandment and he violated it. Behold how many deaths he and his descendants and the descendants of his descendants were fined until the end of all the generations. Now which of God’s qualities is greater than the other, the quality of mercy or the quality of retribution? Proclaim that the quality of goodness is the greater and the quality of retribution the lesser! And the King Messiah fasts and suffers for the sinners, as it says, “and he is made sick for our sins, etc.” ever more so and more will he be triumphant for all of the generations, as it says, “And the Lord visited upon him the sin of all.”

(I avoid further discussion of some of the debates about the authenticity of this passage here. Perhaps they can be discussed in comments if anyone is interested.)

Boyarin cites a few medieval Jewish commentators who, though marginal to rabbinic Judaism, can nonetheless “hardly be suspected of Christian leanings”.

Yefet ben Ali, a Karaite: believed Isaiah 53 was a messianic passage and that the Suffering Servant was indeed the Messiah.

I may remark, then, that our Rabbis with one voice accept and affirm the opinion that the prophet is speaking of the King Messiah, and we ourselves also adhere to the same view.

Rabbi Moses ben Nahman, a leading Spanish Jewish intellectual, acknowledges that according to the midrash and the Talmud Isaiah 53 speaks of the Messiah — although he himself disagreed.

The evidence testifies that the Jews have never spoken with one voice on the meaning of Isaiah 53 and the identity of the Suffering Servant. It cannot be said that the Christian interpretation was original nor that it constituted a break with “Judaism” or the religion of Israel.

Indeed, in the Gospels these ideas have been derived from the Torah (Scripture in its broadest meaning) by that most Jewish of exegetical styles, the way of midrash.

Even if the Christians originated this particular midrash [and by midrash Boyarin means “a way of multiply contextualizing verses with other verses and passages in the Bible, in order to determine their meaning” p. 148] the way they did so (“the hermeneutical practice they were engaged in”), their religious thinking, imagination and interpretation was entirely Jewish.

There is no essentially Christian (drawn from the cross) versus Jewish (triumphalist) notion of the Messiah, but only one complex and contested messianic idea, shared by Mark and Jesus with the full community of the Jews. The description of the Christ predicting his own suffering and then that very suffering in the Passion narrative, the Passion of the Christ, does not in any way then contradict the assertion of Martin Hengel that “Christianity grew entirely out of Jewish soil.”

Gospel Judaism was straightforwardly and completely a Jewish-messianic movement, and the Gospels the story of the Jewish Christ. (pp. 155-156)

I’m also interested in the equating of “bearing our diseases” in Isaiah 53 with “leprosy”. Is there any significance with the not insignificant role of lepers in the Gospel of Mark: 1:40-45 and 14:3.

37 thoughts on “Suffering Messiah Is a Very Jewish Idea”