Good to see Scott Atran respond specifically to the nonsense of Sam Harris and Jerry Coyne on the question of wheher religion is or isn’t a cause of current and past political violence. . . On his Facebook page:

How in fact can we destroy ISIS and its ilk. . . . It certainly will not be with the mindless diatribe against “religion” that produces exactly the kind of knee-jerk reaction that the Islamic State so conscientiously seeks

I have posted before on Sam Harris’s and Jerry Coyne’s ideologically driven dishonest and ignorant attacks on the researchers who do the hard work of understanding the causes of terrorism. Here’s part of Scott Atran’s response to the most recent falsehoods and distortions by Jerry Coyne: Once again Scott Atran exculpates religion as a cause of terrorism. Dismaying how some leading public intellectuals abuse their status and presume to be experts outside their specialist area and exploit the murderous acts of others as an opportunity to propagate their pet anti-theistic hobby horse.

Extract from Atran’s response (only and extract, do read the full post):

I have discussed the matter at length in the historical record (about 7 percent of recorded wars since the punic wars have been explicitly religious wars, and when non-religious conflicts take on a religious cast they also tend to endure and resist exit strategies).

I have also written empirical papers showing the role of religious claims . . .  in faith in the strict sharia of the Caliphate as one of 2 key motivators for volunteers for the Islamic State.

Yet, it remains a fact that the principal factors that predict actual involvement in violence concerns social network factors.

Coyne and Harris have never done a single empirical study involving violent political and religious actors, have never met one in the field (only ostensibly “reformed” ones in a safe environment), and not only do not know what they are talking about, but willfully distort and cherry pick statements -without the slightest awareness or scrutiny of the science – in repetitive declamations to support their ideological position and hackneyed harangue against “liberal apolegetics.”

I invite then to accompany me to the frontlines in Iraq, Syria and elsewhere, or even to the banlieues of Paris, to see for themselves what is driving people to fight and die. And to discuss, as I regularly do, with military and political leaders how in fact we can destroy ISIS and its ilk.

It certainly will not be with the mindless diatribe against “religion” that produces exactly the kind of knee-jerk reaction that the Islamic State so conscientiously seeks, as outlined in tis manifesto Idarat at-Tawahoush (The Management of Savagery-Chaos,) and in the article in its online magazine Dabiq, titled “The Gray Zone,” whose goal is to eliminate any shady area between believer and non-believer, so as to polarize sentiment towards war. 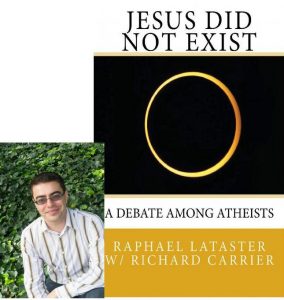 I am finding Raphael Latater’s book, Jesus Did Not Exist: A Debate Among Atheists, a most invigorating and fresh approach to the topic. Caveat: I am taking it slowly and so far have not even completed the first chapter. I have read Richard Carrier’s introductory remarks and Raphael Lataster’s own background introduction and am only about half way through the first chapter. Along the way I’m stopping to study and follow up most of the footnotes, too. But if what lies ahead is as insightful and thorough as what I have read so far then I can see this book being the last word on the flawed attempts of Casey, Ehrman, McGrath and others who have attempted to shriek their conviction that “Yes, Virginia, there really was a Historical Jesus and anyone who doubts that is a very bad person who should be shunned.”

Interestingly, Lataster points out that the only serious attempts by scholars to publish arguments for the historical existence of Jesus — those by Erhman, Casey and McGrath — have done outside the scholarly peer-review process. On the other hand, the two serious attempts by scholars to publish reasons to doubt the historicity of Jesus — Richard Carrier and Raphael Lataster — have gone through the scholarly peer-review process.

The irony of that little datum is not lost on anyone who is aware of the complaints of “historicist scholars” (those arguing for the historicity of Jesus and against the mythicist hypothesis) that mythicism does not subject itself to scholarly peer-review.

Who is Raphael Lataster?

He may be among the first to have a thesis sympathetic to Jesus Mythicism approved by a world-class university.  —  Raphael Lataster’s New Book on Jesus Mythicism By Dr. Hector Avalos