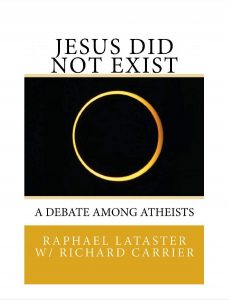 Now late in 2015, the book you hold in your hand, Jesus Did Not Exist: A Debate Among Atheists by Raphael Lataster, contains the first thorough and expert treatment of my argument in print. In fact his chapter summarizing my book is the best brief summary I have read anywhere. . . .
END_OF_DOCUMENT_TOKEN_TO_BE_REPLACED