A Franco-Saudi archaeological team is responsible for the discovery. Prof Frédéric Imbert dated the graffiti to 470-475, a time when anti-Christian persecution began, culminating under the usurper Yusuf. Even the Qur’an refers to it indirectly. The findings show how far Christianity had spread at the time, until the arrival of Islam.

Has anyone seen “First Century Mark”?

By P. J. Williams. He begins

I have had correspondence with Craig Evans and have his permission to confirm that he has not seen the alleged first-century manuscript of Mark and does not know the identity of the scholar or scholars to whom it has (presumably) been assigned for publication.

Nothing new, but it’s always nice to visit a museum.

The Walls of Assyrian Nineveh destroyed

This is an Italian site so most of us will need an online translator. No doubt by now there are some sites with this story in English but this is the one that came to me first. From my Google translator:

A source in Nineveh province revealed on Wednesday, that the Islamic State of Iraq and Syria “ISIS” terrorist organization has resumed bombing historical buildings and monuments in the province, noting that it has blew up the historic wall in the center of Mosul.

The source, who asked for anonymity told “Shafaq News”, that “ISIS terrorists have destroyed on Tuesday night large parts of the historic wall of Nineveh in Tahrir neighborhood in the left coast of the Mosul area, noting that terrorists have used large quantities of explosives”. 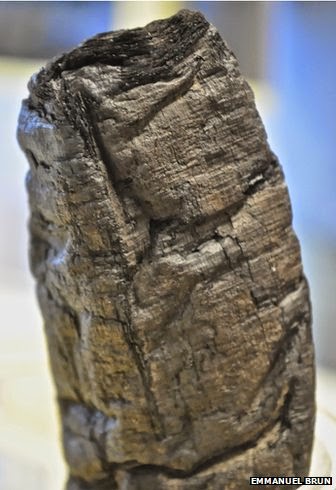 Xray imaging and the Herculaneum Papyri

This one I can’t wait to learn more about. I suspect the results won’t be known for many years, however.

Hundreds of papyrus rolls, buried by the eruption of Mount Vesuvius in 79 AD and belonging to the only library passed on from Antiquity, were discovered 260 years ago at Herculaneum. These carbonized papyri are extremely fragile and are inevitably damaged or destroyed in the process of trying to open them to read their contents. In recent years, new imaging techniques have been developed to read the texts without unwrapping the rolls. Until now, specialists have been unable to view the carbon-based ink of these papyri, even when they could penetrate the different layers of their spiral structure. Here for the first time, we show that X-ray phase-contrast tomography can reveal various letters hidden inside the precious papyri without unrolling them. This attempt opens up new opportunities to read many Herculaneum papyri, which are still rolled up, thus enhancing our knowledge of ancient Greek literature and philosophy.

There is an earlier story (again in Italian so keep the translator handy) on Antonio Lombatti’s blog.

I’ve always wondered what to make of these. The author’s attempt to rationalize an explanation with modern sensibilities strikes me as naively amusing.

What is the sun god doing on the floor of ancient synagogues? Doesn’t that violate the second commandment?

But damn. When I first saw this the full article was available to read, with great illustrations. It has since moved behind a paywall. Gotta be quick.

The Quest for the Historical Israel: Israel Finkelstein vs. Amihai Mazar

In October 2005, the International Institute for Secular Humanistic Judaism invited Israel Finkelstein and Amihai Mazar to speak on the historicity of ancient Israel. The proceedings of Colloquium ’05 were published by the Society of Biblical Literature as The Quest for the Historical Israel: Debating Archaeology and the History of Early Israel.

Videos of the lectures have now been made available on YouTube.

NAZARETH, ISRAEL—Archaeologists excavating the ruins of an early-first-century dwelling this week announced the discovery of the remnants of a tunic thought to have belonged to Mary Magdalene, a garment that suggests the biblical figure was a larger-than-expected size 12. “While scholarly interpretations of the Apocrypha have long held that Mary Magdalene was a size six or size eight, this new evidence indicates that the most celebrated female follower of Jesus was, in fact, a bit curvier,” said Amos Rafaelli, an archaeologist at Haifa University . . . .

Go to the site to enjoy the rest.