This fourth installment of a series I began in 2010 is long overdue. The previous posts are:

My intention is to make a little more widely known a scholarly Palestinian perspective of the history of Israel’s efforts to transfer Palestinians from their lands. A good many myths have long circulated in Western countries about the Palestinian situation, such as the supposed “emptiness” of the land at the time the first Jewish immigrants began to arrive, and about the supposed lack of cultural, religious or ethnic ties Palestinian Arabs had for Palestine, or even the assumption that the Palestinians had no distinctive sophisticated cultural, intellectual and settled urban identities at all. Palestinian historian Nur Masalha has researched the personal, diaries, the letters, the meeting minutes, government archives, of the Jewish leaders and organizations responsible for bringing about the Jewish state of Israel and published one facet of his findings in Expulsion of the Palestinians: The Concept of “Transfer” in Zionist Political Thought, 1882-1948, published in 1992 by the Institute for Palestinian Studies.

I am well aware that some regular readers deplore posts like this thinking they are antisemitic propaganda and some may even loathe this blog and stop reading. Yet this is a far more important question than biblical studies. I can only ask that we pause and check whether we might possibly have not yet truly heard the real story but have relied predominantly upon emotive declamations as filtered through one side of the conflict. If these posts go beyond what the primary evidence of the documented record allows then they can rightly be dismissed. I hope to present the documented evidence for the real plans and hopes of prominent figures that resulted in the Palestine we see today. I see no point in having a blog that only repeats what many others are saying far better than I can. The posts I compose are for most part, I hope, invitations to re-evaluate (on the basis of authoritative sources, clear evidence and valid argument) what many of us (myself included) have long taken for granted.

Rather than add many explanatory footnotes I link directly to (mostly) Wikipedia articles that explain certain names and terms that I bring in to the discussion. I spell names the way they are printed in Masalha’s book.

The Peel Commission was set up in May 1936 to investigate the causes of the often violent conflict between Arabs and Jews in Palestine throughout the six month period of a strike by Arabs that year. The following year the Commission published the report that initiated efforts to divide Palestine into Jewish and Arab entities. It also recommended the eventual “transfers” of 225,000 Arabs and 1,250 Jews. This post makes clear the thinking of Jewish leaders in the lead up to this Commission’s enquiry and recommendation for population transfers.

As we saw in the previous post the Zionist leadership in Palestine in the early 1930s were very conscious of the need not to provoke British public opinion by openly declaring their plans to remove the Arabs from the territories they planned for the Jews. The British public and many government officials had initially been unaware of the strength of Arab opposition to the gradual loss of their lands but when they did learn how strong it was (through Lord Passfield and the Shaw Report) British officials made it clear to Zionist representatives that Britain would not support any plans for transfer.

Accordingly Chaim Weizmann’s plan for transfer was kept from the British public. It was only raised in private talks with selected British officials. Zionist leaders certainly did not abandon their intentions to remove many of the Arabs from their lands.

Schemes for transfer cropped up repeatedly in Zionist deliberations on Arab opposition in Palestine. Those plans were suggested as feelers in negotiations with the British, though there was no mention of them in public announcements. (Simha Flapan, long time head of the Mapam party’s Arab department, in Zionism and the Palestinians, p. 82)

Zionist leaders recognized that Arab transfer could not be accomplished without British support, or even without the British forces.

Zionist leaders did begin to sense that a Jewish state was a real possibility despite the above and other setbacks.

Arab opposition to Zionist policies was clearly increasing. The “Great Arab Rebellion” began with a call for a general strike in April 1936. Nonetheless Jewish immigration continued to rise as a result of persecution in Europe:

Meanwhile, Lord Passfield’s White Paper opposing the transfer of Arabs was effectively repealed by the British Colonial Secretary, Ramsay MacDonald, in a letter to Chaim Weizmann.

Then in March 1936 the British House of Commons voted against a proposal to set up a legislature in Palestine based on population parity. Such a system would not have allowed the Jews to consist of more than a third of its members. Masalha remarks that this legislation was defeated as a result of Zionist pressure.

So by the time of the Peel Commission and its final report Zionist leaders were feeling much more confident in their future and entered a new and much bolder phase of pushing for “a radical solution” to the “Arab problem” — population transfer.

Transfer Plans Back on the Agenda

Meeting of the Political Committee of Mapai, dominant party of the Yishuv (Jewish settlements)

Moshe Beilinson proposed that Zionists should demand from Britain

extensive aid for a large development plan, which would enable the evacuation of large Arab tracts of lands for our colonization, through an agreement with the [Arab] fellahin. (Heller, Yosef. Bama’vak Lemedinah, Hamediniyut Hatzionit Bashanim 1936–1948 [The Struggle for the State: The Zionist Policy 1936-1948], Jerusalem, 1984, p. 118)

Dov Hos pointed out that this proposal was intertwined with the question of Transjordan that was too politically sensitive to be raised at that time.

Ben Gurion pointed out that he would be discussing the Transjordan question with the British high commissioner, Arthur Wauchope, seeking to ascertain if the British government would be prepared to give financial aid. He was not hopeful, however, given the then current Arab protests.

The Jewish Agency was the policy making body of the Jewish settlements.

I would very much like the Arabs to go to Iraq. And I hope they will go there sometime . . . agricultural conditions in Iraq are better than in the Land of Israel because of the quality of the soil. Secondly, they will be in an Arab state and not in a Jewish state. We cannot remove them from here. Not only because we cannot, even if an exchange has been carried out between the Greeks in Asia Minor and the Turks, between Turkey and Greece. But today they would not accept this.

What we can demand today is that all Transjordan be included within the Land of Israel . . . on condition that Transjordan would either be made available for Jewish colonization or for the resettlement of those Arabs whose lands [in Palestine] we would purchase. Against this, the most conscientious person could not argue . . . For the Arabs of the Galilee, Transjordan is a province . . . this will be for the resettlement of Palestine’s Arabs. This is the land problem . . . Now the Arabs do not want us because we want to be the rulers. I will fight for this. I will make sure that we will be the landlords of this land . . . because this country belongs to us and not to them . . . .

In the notes Masalha adds:

Ussishkin also stated that the frontiers of the Land of Israel stretched from the “great sea” [the Mediterranean] to the Euphrates and were not the Balfour frontiers. These wider frontiers are clearly “drawn on the wall of my Jewish National Fund Office.“

Notice that it is understood that compulsion would be required to transfer the Arabs to Iraq but that somehow it is assumed compulsion would not be necessary to move them to the Transjordan — an idea to which “the most conscientious person could not object.”

This concept of transfer to Transjordan as being somehow painless and permissible is a recurring theme in Zionist debate. (p. 52)

[Ruppin had] come to the conviction and conclusion that there is no way of reaching a peace agreement with the Arabs without abandoning our fundamental demands. . . .

I also had entertained dreams like yours. I once said, Iraq will absorb the Arabs of the Land of Israel and all the peoples of the world would recognize our justified demands. . . . But . . . how could you conceive that Arabs would abandon the Land of Israel and go to Baghdad? What is in it for them? . . . . In Baghdad the fellah receives 3 or 4 piastres as a daily wage. Here the fellah receives 12-15 piastres. There he is living in abject poverty, but not here. Why should he go to Iraq? Is this only because it is an Arab country? In his eyes Palestine nowadays is still an Arab country, and he will still fight for its Arabness. . . . and the condition of the agriculture in Iraq could not be described as the Garden of Eden. (Protocol of the Jewish Agency Executive meeting 20 May 1936, in Heller, Yosef. Bama’vak Lemedinah, Hamediniyut Hatzionit Bashanim 1936–1948 [The Struggle for the State: The Zionist Policy 1936-1948], Jerusalem, 1984, pp. 140-141)

Preparing for the Arrival of the Peel Commission

The Royal (Peel) Commission was scheduled to arrive in Palestine in November 1936. The Jewish Agency Executive held more meetings in October to prepare for them.

At the time of these meetings there were calls from the Palestinian mandatory government for legislation to protect minimum land holdings for the Arab peasants and to impose restrictions of Jewish land purchases in certain areas. (Recall that the purchases were usually arranged between Jewish purchasers and absentee landlords: the peasants were powerless.)

A consensus emerged within the Jewish Agency Executive to oppose any legislation granting protection to Arab tenant farmers. 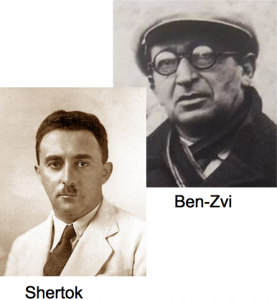 Yitzak Ben-Zvi, president of Yishuv‘s national council, another prominent Histadrut and Mapai leader (later the second president of the state of Israel)

–argued for removing dispossessed Arab peasants to neighbouring countries, including Transjordan, on a “voluntary” basis.

Moshe Shertok, head of the Political Department of the Jewish Agency:

— supported Ben-Zvi’s view since Transjordan had a large land reserve for both Jewish colonization and Arab resettlement.

— favoured adopting “in principle an undeclared policy” to be promoted directly in talks with the Peel Commission due to arrive in November.

If it was permissible to move an Arab from the Galilee to Judea, why is it impossible to move an Arab from Hebron to Transjordan, which is much closer? There are vast expanses of land there and we are overcrowded. . . . Even the High Commissioner agrees to a transfer to Transjordan if we equip the peasants with land and money. If the Peel Commission and the London Government accept, we’ll remove the land problem from the agenda.

Ben-Gurion had doubts that the British would approve of mass transfer even though he sympathized with the proposal. The Greco-Turkish exchange was not a valid precedent, he reasoned, since the Jewish settlers were not a state. . . “although there is nothing morally wrong with the idea.“

The proposal for a “voluntary” transfer of displaced Arab farmers to the Transjordan was passed by majority vote of the twenty-one member Executive.

Both of these members were non-Zionists — there were a total of four non-Zionists on the Executive. David Senator had earlier argued

We cannot say that we want to live with the Arabs and at the same time transfer them to Transjordan.

Next — the Peel Commission arrives in Palestine . . . .

19 thoughts on “Zionist Plans for Mass Transfer of Arabs: Alive But Discreet”