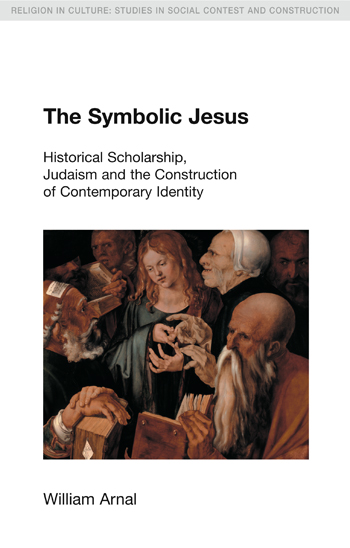 In The Symbolic Jesus: Historical Scholarship, Judaism and the Construction of Contemporary Identity, William Arnal gives us a reasonable explanation for why Historical Jesus scholars today are characterized by:

In other words, whatever happened to Rudolf Bultmann and good-old scholarly scepticism?

Arnal’s discussion is a broad one encompassing scholarly, political, religious and cultural identities. This posts focuses on only the scholarly identity. I give some of the background relevant to this new scholarly identity formation since the 1970s and 1980s since it helps us understand more completely what has been going on that has led theologians to stress their apparent credentials as historians.

Up until the 1970s and 1980s New Testament scholarship was dominated by “Bultmannian, post-Bultmannian, or Bultmann-trained scholars”.

The “New Quest” for the Historical Jesus is traditionally said to have begun in 1953 with a publication by Ernst Käsemann arguing that the only way to be assured a saying of Jesus was authentic was that it stood distinct from both Christianity and Judaism. This was called the criterion of double dissimilarity. It did not mean that Jesus said nothing that overlapped with distinctively Jewish or Christian ideas but that the only ones we could be reasonably confident came from Jesus were those that were dissimilar to both.

Ernst Käsemann was a student of Bultmann.

Other scholars prominent in this “New Quest” (that is, the apparent revival of Historical Jesus studies after Albert Schweitzer is said to have closed the curtain on the “First Quest”) have been

This “New Quest” throughout the 1950s and 1960s, in both Europe and North America, could be most distinctively described as follows:

Arnal sees the 70s and 80s as the period in which North American, Irish and British (Anglophone) scholarship “came of age, began to find its own legs, and reflected a new confidence.”

One of the indications of new confidence was an Oedipal breaking away from the dominance of the field’s German forefathers. The trend is even more marked today. (p. 41, published 2005).

The indicators of this coming of age are

not simply . . . citing Rudolf Bultmann and his students a little less frequently. It also takes the form of evolving a new set of approaches to the New Testament documents, building on past scholarship, but decisively rejecting some of its more distinctive features. 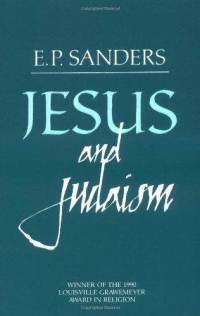 Arnal holds up a copy of Jesus and Judaism by E. P. Sanders as a landmark work that captures what this “third quest” is about.

The opening pages demonstrate a new trust in the gospel narratives — Arnal calls this trust in their ultimate historicity an “assumption” — with a list of “indisputable facts” about the life of the historical Jesus.

To refresh your memories here they are (p. 11 of Jesus and Judaism)

is little more than an outline of narrative sequence of the synoptic gospels. (p. 42)

So we can begin to see the hallmarks of the “Third Quest”:

Plausibility thus serves as both a mechanism for determining historical authenticity and as a hermeneutical device. No serious scholars of ancient Christianity accept the historicity of everything in the canonical gospels. But it appears that “third quest” scholars most often assume that, barring clear evidence to the contrary, the material in the gospels does reflect actual historical events. In other words, the burden of proof rests with those denying the authenticity of the material; exactly the opposite approach is normally taken by scholars operating within the “second quest” paradigm, where the burden of proof is on those who assert authenticity. (p. 42)

So the third questers are working with assumptions and methods that are diametrically opposed to those of the previous quest.

The degree of scepticism is different. The latter places more emphasis on the narrative material in place of the sayings material.

And most significantly, “third quest” is looking for ways to find a “good fit” between Jesus traditions and context; the earlier quest was looking for a “lack of fit”.

At one extreme, looking for a Jesus characterized by what is different from both Judaism and subsequent Christianity will produce a somewhat “queer duck rather than a serious person worthy of a hearing” (James M. Robinson) while at the other extreme we will “find” a Jesus who has nothing distinctive about him at all, one who is no different from anybody else.

There is one more thing that marks the new “coming of age” anglophone scholarship. That is, in contrast to Bultmann, scholars believe something significant can be known about Jesus and a major source for this knowledge is the post-biblical Jewish literature.

Scholars who failed to produce what some saw as an obviously “Jewish” Jesus were accused of reverting to the days of the “second/new quest”. A primary target for this accusation was the Jesus Seminar. (For the benefit of Maurice Casey and his students I should advise that the British Jesus Seminar was not the only such seminar and that there was also a lesser-known American one. The one Arnal refers to is the American Jesus Seminar, the one associated most publicly with names like Robert Funk, John Dominic Crossan, Burton Mack.) The Jesus Seminar was unafraid to deploy the criterion of dissimilarity in order to assess the likelihood of authenticity in sayings (and deeds) of Jesus. Its Fellows generally embraced a scepticism towards the historical reliability of the gospels.

The Jesus arrived at through this Jesus Seminar was comparable to a Cynic-sage. A Mediterranean peasant with anti-imperialist sentiments. A growing number of scholars saw such a Jesus as somehow lacking distinctiveness as a “Jew”.

And here we come to the main point of William Arnal’s monograph. There have been — currently are — heated declarations among many scholars opposing any view of Jesus that is not in some conventional (even stereotypical?) sense “Jewish”. This is certainly a theme of James Crossley’s book I am currently reviewing, Jesus in an Age of Neoliberalism. To posit a Cynic sage or a Mediterranean peasant is tantamount to denying the Jewish identity of Jesus and all the negative insinuations that come with that.

The debate is absurd, as Arnal points out. No-one is denying Jesus was a Jew. So why the strident declamations from scholars against any interpretation that does not label Jesus as one who made his mark in history through some conventional or stereotypically Jewish interest?

I cannot help but speculate . . . that at least some of the anxiety generated over the “Jewish Jesus” derives its energy from a desire to produce a distinctive and, especially, an independent anglophone New Testament scholarship. (p. 43)

It is difficult not to see in the Jewish Jesus a kind of breakaway, and even repudiation, of the work of earlier German scholarship, paving the way to a new identity and a new confidence for Anglo-American New Testament scholarship, but bringing with it a concomitant danger of throwing out the baby with the bathwater. (p. 44)

The scholars associated with the “second quest” and its methods — Bultmann, Käsemann, Perrin, Duling, Jeremias — did produce Jesus figures that were “not simply non-Jewish . . . but practically anti-Jewish . . . (and this in the shadow of the Shoah and the Second World War). . . .”

The association of a thoroughly Jewish Jesus, one who is not measured in terms of distance from Judaism, but rather his proximity to it, has the effect of making our more recent and homegrown scholarship very distinctive, most especially from our German predecessors. This is all the more so when they very techniques they used are repudiated or even, in some instances, actually inverted. (p. 44)

So we have a sharp divide in methods and conclusions. The Second Quest milestoned by names like Burton Mack, John Dominic Crossan and The Jesus Seminar with its scepticism, its criterion of dissimilarity, its stress upon sayings, its Cynic-like sage Jesus. The the Third Quest, noted for names like Geza Vermès, E. P. Sanders and Paula Fredriksen, with its confidence in historicity behind gospels along with its insistence on a Jesus who coheres with a generalized Palestinian Judaism. 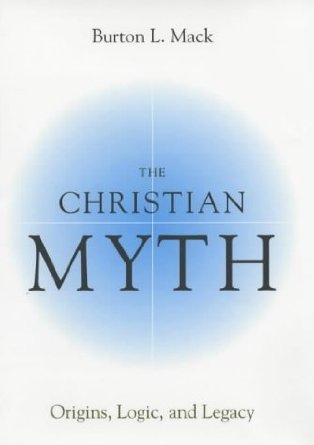 Burton Mack portrays the shift in North America this way:

It was only [in the 1940s and 1950s] that American scholars finally took note of Bultmann, read Kierkegaard, and began trying to catch up with the European history of New Testament scholarship, the history of religions schools, the perennial issues of Christian origins, the various criticisms for controlling the exegesis and interpretation of texts, and the fact that, in Europe, New Testament study had been a rigorous academic discipline for over 150 years.

During the fifties, Europeans and American scholars trained in Europe were invited to leading positions of graduate schools in the States, bringing with them the lore, rules, rudiments of European intellectual traditions.

It required, however, another fifteen or twenty years before scholars trained and working in America found a way to focus their newly learned critical skills upon questions appropriate to the American scene.

One of the big questions that bothered American scholars was the negative conclusions of the European quest for the historical Jesus. Surely Bultmann had gone too far in erasing the face of the historical Jesus. Surely Schweitzer was wrong in his view of Jesus as a mistaken apocalyptic visionary. Surely it must be possible to know what Jesus had said or done that started the Christian religion. Don’t we need to ask whether he knew what he was doing? And so, not having worked through all of the critical issues familiar to the older quest, American scholars were not yet sobered by its findings or failures. They decided to work it out for themselves by making a fresh start. (pp. 29-30, The Christian Myth, my formatting)

Arnal links the new identity of this new phase of American dominated scholarship with secularization. In the first half of the twentieth century, he writes, the best New Testament scholarship was done by Germans, in particular by German Lutherans. These scholars naturally believed their work had theological relevance and that their work was a form of theological investigation.

More recent scholarship has involved scholars from a much wider range of religious affiliations, including some secular ones. It has accordingly

tended to conceptualize itself as historical rather than theological work. (p. 45)

But why? Arnal probably hits the nail on the head when he points out the professional self-interest of scholars in stressing the Jewishness of Jesus in this context:

The Jewish Jesus must surely be associated with this less theological, or at least less overt and consistent theological, orientation in recent research. In order to stress the distance between the (illegitimate) theological drive behind earlier work and the (legitimate) historical drive behind more recent work, there may be a tendency to avoid presenting Jesus in terms that are continuous with Christianity. In other words, Jesus the Jew is most decidedly not Jesus the Christian, and so demonstrates a non-theological commitment on the part of scholars who present him thus. Many of us are, after all, looking for legitimacy of our field now in the non-confessional setting of the secular university: how better to demonstrate that than to visibly undo the theologically-driven “Christianization” of Jesus? (p. 45, my bolding)