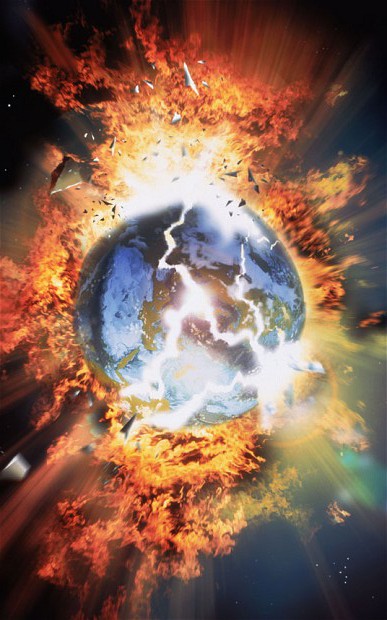 The Holy Great One will come forth from His dwelling,
And the eternal God will tread upon the earth, (even) on Mount Sinai,
[And appear from His camp]
And appear in the strength of His might from the heaven of heavens.

And all shall be smitten with fear
And the Watchers shall quake,
And great fear and trembling shall seize them unto the ends of the earth.

Immediately after the tribulation of those days shall the sun be darkened, and the moon shall not give her light, and the stars shall fall from heaven, and the powers of the heavens shall be shaken

And I beheld when he had opened the sixth seal, and, lo, there was a great earthquake; and the sun became black as sackcloth of hair, and the moon became as blood;

And the stars of heaven fell unto the earth, even as a fig tree casteth her untimely figs, when she is shaken of a mighty wind.

And the heaven departed as a scroll when it is rolled together; and every mountain and island were moved out of their places.

And said to the mountains and rocks, Fall on us, and hide us from the face of him that sitteth on the throne, and from the wrath of the Lamb:

For the great day of his wrath is come; and who shall be able to stand?

What does all this mean? Such apocalyptic had a long heritage, as passages from Enoch (above) and Micah, Jeremiah and Isaiah (below) testify. How did the authors expect readers/hearers to interpret such language?

Again from Richard Horsley, this time from Scribes, Visionaries and the Politics of Second Temple Judea . . .

In earlier interpretation of “apocalyptic” literature, this hyperbolic language of theophany was taken in a literal sense as predicting “cosmic catastrophe,” the destruction of the created order. But that was a misunderstanding of such “apocalyptic” language, which stands in continuity with the traditional register of language dedicated to theophany. Far from cosmic dissolution, the Book of Watchers is concerned with the restoration of the heavenly order.

The point of the earthshaking pyrotechnics of God’s appearance, in heightened metaphoric and hyperbolic language, was to symbolize how terrible and terrifying the appearance of God in judgment will be. The whole tradition of such oracles (including Mic. 1:2-7; Jer. 25:30-38) was sharply political, pronouncing condemnation of oppressive domestic or foreign rulers and their defeat by God acting as divine Warrior with heavenly armies — and/or the people’s deliverance from such rulers. The prophetic oracle in Isa. 24:17-23 even includes the “host of heaven” along with “the kings of the earth” in the divine punishment . . . . (p. 158, my bolding for all quotations)

This has been well understood among scholars for some time now and Horsley does in another work take Bart Ehrman to task for not keeping up to date with his own field.

Bart Ehrman basically reverted to Schweitzer’s century-old picture of Jesus as a “Jewish apocalyptist.” He was convinced that history was coming to an end, that God was about to intervene in “a cosmic act of judgment, destroy huge masses of humanity, and abolish existing human and religious institutions. . . . Jesus expected this cataclysmic end of history could come in his own generation.” (From Jesus: Apocalyptic Prophet of the New Millennium, pp. 17-19) . . . Ehrman either ignored or dismissed much of the recent critical scholarship (p. 26, Kindle version, The Prophet Jesus and the Renewal of Israel)

The argument that Jesus was an apocalyptic prophet who foretold of a cosmic end of all things in a great fiery judgment is an anachronism, a careless retrojection of an idea from our own day back into the time of Jesus.

Many today, through the same misunderstanding of the nature of apocalyptic literature, are still waiting for the literal shaking of the earth and heavens.

Hear, O peoples, all of you,
listen, O earth and all who are in it,
that the Sovereign LORD may witness against you,
the Lord from his holy temple.

Look! The LORD is coming from his dwelling place;
he comes down and treads the high places of the earth.
The mountains melt beneath him
and the valleys split apart,
like wax before the fire,
like water rushing down a slope.
All this is because of Jacob’s transgression,
because of the sins of the house of Israel.
What is Jacob’s transgression?
Is it not Samaria?
What is Judah’s high place?
Is it not Jerusalem?

“Therefore I will make Samaria a heap of rubble,
a place for planting vineyards.
I will pour her stones into the valley
and lay bare her foundations.
All her idols will be broken to pieces;
all her temple gifts will be burned with fire;
I will destroy all her images.
Since she gathered her gifts from the wages of prostitutes,
as the wages of prostitutes they will again be used.”

“Now prophesy all these words against them and say to them:

“‘The Lord will roar from on high;
he will thunder from his holy dwelling
and roar mightily against his land.

He will shout like those who tread the grapes,
shout against all who live on the earth.

The tumult will resound to the ends of the earth,
for the Lord will bring charges against the nations;
he will bring judgment on all mankind
and put the wicked to the sword,’”
declares the Lord.

This is what the Lord Almighty says:

“Look! Disaster is spreading
from nation to nation;
a mighty storm is rising
from the ends of the earth.”

At that time those slain by the Lord will be everywhere—from one end of the earth to the other. They will not be mourned or gathered up or buried, but will be like dung lying on the ground.

Weep and wail, you shepherds;
roll in the dust, you leaders of the flock.
For your time to be slaughtered has come;
you will fall like the best of the rams.

The shepherds will have nowhere to flee,
the leaders of the flock no place to escape.

Hear the cry of the shepherds,
the wailing of the leaders of the flock,
for the Lord is destroying their pasture.

The peaceful meadows will be laid waste
because of the fierce anger of the Lord.

Like a lion he will leave his lair,
and their land will become desolate
because of the sword of the oppressor
and because of the Lord’s fierce anger.

Terror and pit and snare await you,
people of the earth.

Whoever flees at the sound of terror
will fall into a pit;
whoever climbs out of the pit
will be caught in a snare.

The floodgates of the heavens are opened,
the foundations of the earth shake.

The earth reels like a drunkard,
it sways like a hut in the wind;
so heavy upon it is the guilt of its rebellion
that it falls—never to rise again.

In that day the Lord will punish
the powers in the heavens above
and the kings on the earth below.

They will be herded together
like prisoners bound in a dungeon;
they will be shut up in prison
and be punished after many days.

The moon will be dismayed,
the sun ashamed;
for the Lord Almighty will reign
on Mount Zion and in Jerusalem,
and before its elders—with great glory.