This post concludes an outline of Thomas Witulski’s analysis of Revelation 6:1-8. All posts are archived under Witulski: Die Vier Apokalyptischen Reiter Apk 6

And I looked, and behold a pale green/blue horse: and his name that sat on him was Death, and Hades followed with him. And power was given unto them over the fourth part of the earth, to kill with sword, and with hunger, and with death, and with the beasts of the earth. — Revelation 6:8

Here we have two figures, one named Death and another, following, named Hades. The two of them, together, have power over the fourth part of the earth. I bypass here the bulk of Thomas Witulski’s discussion about the authenticity of the received text and other passages in which “Death and Hades” appear and jump to his conclusion:

. . . [T]he view has prevailed in ancient historical research that the uprising of the Jews in Egypt and North Africa was ultimately put down by the collaboration of two Roman commanders; on the one hand, the governor of the province of Aegyptus, Μ. Rutilius Lupus, and on the other hand, the praefectus classis Q. Marcius Turbo. (W. 192)

If we accept the view that the four horsemen represent historical persons, that the first horseman was the emperor Trajan, that the second horseman signified the Jewish messianic uprisings, and that the third represented an Asian governor attempting to regulate the consequences of that uprising, then we may think it necessarily follows that the fourth horseman named Death along with another named Hades represent the two Roman commanders appointed to suppress that Jewish rebellion.

The colour of the horse is χλωρός (chloros). The Liddell-Scott-Jones Lexicon gives its meaning as greenish-yellow, pale, green. Various commentaries denote its meaning as the colour of death, of a pale blue corpse. The word appears in Homer’s epics when persons are faced with the “pale horror” of imminent death. Another Greek author wrote of facing imminent death so that he turned “paler than grass in autumn”.

On the phrase “to kill with the sword”, David E. Aune in Revelation 6–16 notes

When we consult Aune’s Berger citation we read:

Ius gladii. “The power to punish criminal individuals” (D. 2.1.3) with all kinds of punishment, the death penalty included. In Rome it was the emperor himself who exercises the right in capital trials. He could delegate it to the supreme officials in the provinces (governors, legati) and to the prefects in Rome, at first only in a specific case, later generally.

This brings us back to the name of the initial rider, Θάνατος (=Death). Again turning to Liddell-Scott-Jones we find:

W. comments that Aune’s interpretation is possible but falls short of being provable from the text.

The author of Revelation may be drawing upon the four methods of death inflicted upon Jerusalem in Ezekiel 14:15-21: sword, famine, wild beasts and plague.

Fifty of their most important fortresses and 985 of the most important settlements were razed to the ground. Five hundred and eighty thousand men were slain in the various raids and battles [i.e., the sword], and the number of those that perished by famine, disease and fire was past finding out. Thus nearly the whole of Judaea was made desolate, a result of which the people had had forewarning before the war. For the tomb of Solomon, which the Jews regard as an object of veneration, fell to pieces of itself and collapsed, and many wolves and hyenas rushed howling into their cities.

(Aune, 402 — Aune quoted from “Five hundred and eighty thousand…” I have added the preceding sentence from Cassius Dio.)

Such were the punishments inflicted by the Romans in the Judean rebellion. One can imagine the same fate was delivered to the Jewish population by the two Roman commanders appointed the task of suppressing the earlier rebellion.

The remarks in Rev 6,8d then describe – possibly in a stereotypical way – the consequences of the victory of the Roman troops for the Jewish insurgents; a large number of them lose their lives by the sword, i.e. here specifically: in the fight against Roman troops, by hunger, by the death penalty and by the beasts of the earth, consequences which, according to Cassius Dio, also affected the Jews who were defeated in the Bar Kokhba uprising in a similar way. (W. 198) 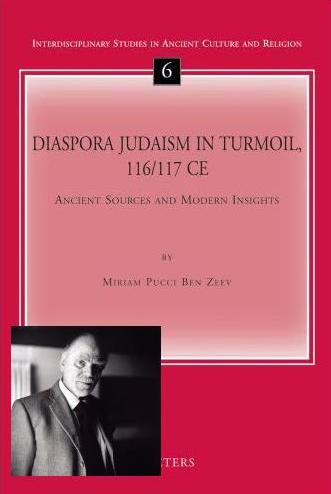 For the evidence of the two Roman commanders working together we have sources compiled and translated by Miriam Pucci Ben-Zeev:

Military developments are hinted at in a letter preserved in CPJ II, 438, which mentions a Jewish victory on the 20th of an unnamed month and the arrival at Memphis of “another legion of Rutilius” probably to be identified with Rutilius Lupus, prefect of Egypt on the 22nd of the same month, namely, two days later. There is no necessity to argue for a date before the arrival of Turbo in Egypt, since Syme has shown that Turbo did not replace Lupus as prefect of Egypt. Lupus, therefore, may well have remained in Egypt until August 117, and his military forces may have been active side by side with those brought along by Turbo. . . . . (Ben-Zeev, 169)

Other letters testify to the involvement of these commanders. To give one other example:

The one hope and expectation that was left was the struggle of the massed villagers from our district against the impious Jews; but now the opposite has happened. For on the 20th (?) our forces fought and were beaten and many of them were killed… now, however, we have received the news from men coming from… that another legion of Rutilius arrived at Memphis on the 22nd and is expected. (Ben-Zeev, 25)

Further interpretation of the sources:

It seems therefore impossible to rule out the possibility that the Rutilius who participated in the fighting mentioned in SB 10, 10502 is to be identified with the prefect of Egypt, the more so since he is called here [‘hegemon’] a term widely attested in the papyri, along with [‘eparchos’], referring to the prefect of Egypt. And since in the years 113-117 the Jewish uprising was the only armed event known to have taken place in Egypt, one may well assume that this fighting was that against the Jews. His personal participation in the repression of the Jewish uprising was apparently part of his duty as Roman prefect of Egypt, who was the commander of an army, and in fact we know that most prefects had at least held two or three of the militiae equestres before their appointment. (Ben-Zeev, 175f.)

As for Turbo, see the quotation of Eusebius and the extract from E. Mary Smallwood’s history in The Red Horse of the Apocalypse and Its Rider.