In the Lives of the Prophets, a Jewish work from as early as the first century that has been supplemented with Christian additions, we read of the death of Isaiah:

The image captured the imaginations of medieval manuscript decorators: 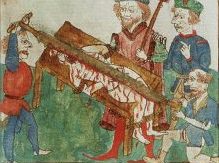 There remains the problem, of which the reader must by now be thoroughly aware, of how a saint and, for that matter, a Jewish prophet, came to be imagined as having died by the extraordinary process of being sawed in two. Even granted that the Middle Ages liked its tales of martyrdom gory and sensational, one cannot help but feel that to saw a man in two is not only cruel, but also unusual and impractical. Other motives besides a preference for the excessive seem required to explain the choice of an instrument of torture which is almost without parallel in the long catalogue of Christian and Jewish suffering. — Bernheimer, 21

Richard Bernheimer’s article was published in 1952 and included the assurance that that “fountain was and still is an intermittent one which flows at irregular intervals.” The reason for the spring’s intermittent performance is attributed to the prayers of the deceased saint buried there. The story of Isaiah’s death has all the appearance of an etiological tale to explain the origin of such a spring.

There is only one explanation for all this: Isaiah, as here presented, is to be taken not as a historical figure, but as the owner of the spring, its lord and tutelary demon; the story about his miraculous activities is an etiological legend meant to explain the origin of the spring, its name and its puzzling intermittence; and the connection of Isaiah with it is a mere abuse of his name, encouraged by the chance circumstance that he had mentioned Siloam in several of his prophecies.

Yet Isaiah’s martyrdom itself is directly linked to the explanation of the occasional performance of the spring. Isaiah prayed for just a little water whilst his executioners were sawing away at his body and that prayer was answered by means of the spring. The reason the Jews were said to have buried the two halves of his body beside the spring was so that the effect of his prayers could continue to provide (intermittent) water for the locals. So it was Isaiah’s death that continued to benefit future generations. The conclusion that follows is grim:

The pious legend reveals itself as a rather thinly disguised account of a sacrificial act, imagined or performed as a regular contribution to fertility or as a means of propitiating the capricious and unreliable lord of the spring in times of drought. If it is a propitiatory act — and we have no means of ascertaining, whether the story is not rather mythological — then the ritual must have taken the form, all too familiar in ancient Palestine, of a human sacrifice. . . .

. . . but “sawing as a method of human sacrifice was not among the usual procedures of the cult practised in ancient Palestine. (27f)

Is there evidence of sacrifice by this method?

To this writer’s knowledge, only one historical case of this kind of human torture must be acknowledged beyond dispute. A moderate distance from Jerusalem, at Gezer, excavations conducted a few decades ago yielded, together with other evidence of ritual cruelties, the well-preserved upper parts of two human bodies, which apparently had been sawed in two when still alive — one belonging to a youth of about eighteen years, the other to a girl one or two years younger. While the purpose of these slayings, dating back to the second millennium B.C., is not known, it is perhaps not pointless to observe that Gezer had a water system similar to that in Jerusalem, and that the killing may have been done for its benefit.

There is, furthermore, the somewhat doubtful passage in the book of Samuel which asserts that David submitted the inhabitants of conquered Rabat Amon to iron saws and flails and burned them in brick kilns — atrocities of which recent commentators have tried to absolve him by translating that he set them to work at the instruments in question. The older version, if correct, implies that the penalties meted out to the defeated garrison were continuations into the political field of practices originally connected with human sacrifice. (28)

This brings us to ancient mythology. There survives an Egyptian tale of two brothers in which a shepherd goes to the Valley of Cedars in Lebanon and deposits his heart on the top of one of the trees. When the tree is felled he himself falls dead. Another ancient tale has the coffin of Osiris drifting to Lebanon where a tree grows around it. A king thought it the largest and finest tree so had it cut down to be used as a column in his palace.

We are here dealing with a Phoenician cedar god who dies as his tree is cut in two. (28)

One has to wonder if there is some belief in the magic of a body being cut like a tree gives life to the ground as a result of the victim becoming analogically part of the vegetation.

It is amusing to record in this connection that the present Mohammedan population of Jerusalem, oblivious of the ancient tradition attached to it, explains the periodicity of the Gihon by saying that the spring used to be inhabited by an evil spirit in the form of a camel which stopped its flow by drinking up the water. That camel, we are told, is now dead, and has been replaced by chickens! (31)

But why was Isaiah so connected in order to “historicize” such a pagan tradition and custom? In Isaiah 22:9-11 and 8:6-8 we read of that prophet’s connection with the pool of Siloam.

You saw that the walls of the City of David
were broken through in many places;
you stored up water
in the Lower Pool.
10 You counted the buildings in Jerusalem
and tore down houses to strengthen the wall.
11 You built a reservoir between the two walls
for the water of the Old Pool,
but you did not look to the One who made it,
or have regard for the One who planned it long ago.

“Because this people has rejected
the gently flowing waters of Shiloah [=Siloam]
and rejoices over Rezin
and the son of Remaliah,
7 therefore the Lord is about to bring against them
the mighty floodwaters of the Euphrates—
the king of Assyria with all his pomp.
It will overflow all its channels,
run over all its banks
8 and sweep on into Judah, swirling over it,
passing through it and reaching up to the neck.
Its outspread wings will cover the breadth of your land,
Immanuel!”

21 thoughts on “Isaiah Sawn in Two — Origin of the Story”