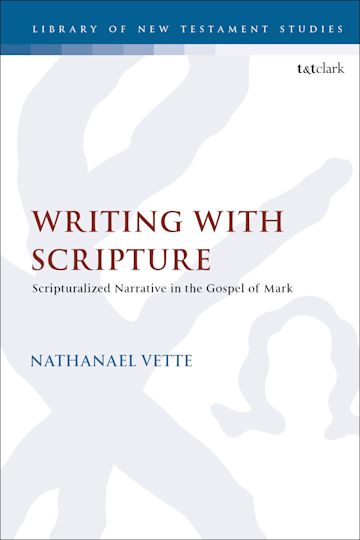 When I offered to post a comprehensive review of Writing With Scripture by Nathanael Vette the publisher sent me a copy and now I hope this first in a series of reviews will begin to do justice to all concerned and interested. I write primarily as a layman for interested lay readers.

Who is Nathanael Vette?

Nathanael Vette [NV] appears on the University of Edinburgh’s site as a Postdoctoral Research Assistant in the School of Divinity.

In the book’s Acknowledgements NV thanks Helen Bond for supervising the research that led to this book. Other names many readers of this blog will recognize and who are singled out for gratitude are Mark Goodacre (one of NV’s doctoral examiners), James McGrath (for feedback) and Chris Keith (editor of the series accepting Writing With Scripture for publication). There are other names, of course, but I have listed for context those I think to be most widely known among lay readers. NV also gives a special appreciation to the Issachar Fund “for their generous sponsorship”.

My postdoctoral fellowship at the School of Divinity is sponsored by the Issachar Fund for researching the themes of gratitude and loyalty in Christianity and Islam. My primary research is on the Gospel of Mark and how compositional practices in Second Temple Judaism can help explain the emergence of the Gospel form. (From NV’s profile)

Writing With Scripture: Scripturalized Narrative in the Gospel of Mark is divided into four chapters:

The Introduction sets out the two different ways in which Jewish Scriptures are found in the Gospel of Mark: some are explicitly quoted and interpreted or merely alluded to in order “to support an argument or interpret an event”; others we sense are somehow “hidden” insofar as they are “woven seamlessly into the narrative” and we are left wondering why the author wrote that way. Was the author attempting to indicate to readers that Jesus fulfilled the “prophecies” of the Jewish Scriptures? Were events fabricated from those Scriptures or were historical events interpreted through them? Or were the Scriptures borrowed for some other reason? The Introduction will be the focus of this post.

The second chapter sets out a literary context for the Gospel of Mark by examining how Jewish Scriptures are used, both explicitly and implicitly, in Second Temple literature: episodes in Pseudo-Philo’s Liber Antiquitatum Biblicarum (Book of Biblical Antiquities), the Genesis Apocryphon, 1 Maccabees, Judith and the Testament of Abraham. I found these to be some of the book’s most rewarding passages. Many readers have been made aware of scholarly studies comparing the Gospel of Mark with Greco-Roman literature (e.g. Homeric epics, Greek tragedy, Aesop, and others) so it is refreshing to be reminded of the Jewish literary context of the Gospel.

The third chapter zeroes in on several passages in the Gospel of Mark itself: those comparing Jesus with Elijah and then with Elisha, the resonances between the death of John the Baptist and the narrative of Esther, and of course the use of Scriptures throughout the Passion Narrative. How do the uses of the “Old Testament” compare in these passages with OT usages in the literature discussed in the preceding chapter? What can be reasonably concluded about the purpose of those usages as a result of the comparisons? NV argues that many of those Jewish scriptural allusions are found in the Gospel because they happened to be raw material the author found useful for fleshing out narrative scenes. In other words, we are in danger of reading too much into the Gospel if we seek to find a theological meaning behind many of the Scriptural allusions.

Finally, NV brings together the different ways in which we find Scripture used in the Gospel of Mark and what these can tell us about the influences and purposes of the narrative. The question that naturally arises is how much of what we read in the Gospel has been imaginatively invented by an author from OT passages and how much can qualify as historical reality? And how can we tell the difference? These questions are posed throughout the book in preparation for a final discussion and assessment at its end.