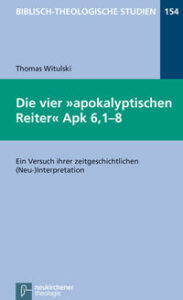 It may seem unusual to think of any of the “four horsemen of the apocalypse” as representatives of individual persons. Nonetheless, that is the perspective advanced by Thomas Witulski as we saw in the post on The White Horseman of the Apocalypse. The argument was that the rider of the white horse was a coded reference to a historical figure: one who carried a bow, was given a crown, and who went forth conquering and to conquer yet further. Before presenting W’s interpretation of the rider of the red horse let’s back up a little and understand some of the justification for these “historical-personal” identifications.

Note that each of the four effects is brought about by its respective rider and some detail related to that rider: the first carries a bow, the second a sword, and so forth. It is widely acknowledged that the four horses in Revelation 6 are inspired by the model of the four horses, or groups of horses, in Zechariah 1 and 6. In those passages the horses alone are sufficient to represent the meaning to be discerned. So why does our author of Revelation introduce distinctive riders on each of his horses? Such a focus on each of the riders may suggest that the author has something other in mind than a general calamity being symbolized by each of the coloured horses.

Commentators have noted also the relationship between these horses, or at least the first one, to other imagery in Revelation. The Messiah rider of the white horse in Revelation 19 is introduced in the same way as the horses and their riders in Revelation 6:

Revelation 19:11 I saw heaven standing open and there before me was a white horse, whose rider is called Faithful and True. With justice he judges and wages war. 12 His eyes are like blazing fire, and on his head are many crowns. He has a name written on him that no one knows but he himself. 13 He is dressed in a robe dipped in blood, and his name is the Word of God. 14 The armies of heaven were following him, riding on white horses and dressed in fine linen, white and clean. 15 Coming out of his mouth is a sharp sword with which to strike down the nations. “He will rule them with an iron scepter.” He treads the winepress of the fury of the wrath of God Almighty. 16 On his robe and on his thigh he has this name written: king of kings and lord of lords.

Indeed, the first rider on the white horse to emerge from the first seal carries several reminders of the Christ figure in other sections of Revelation and Zechariah:

More explication can be added and W does add much more as he engages with various commentaries addressing the apparent relationships between Revelation and Zechariah and the four horsemen of the apocalypse. The point is clear: at least the first horseman can easily be understood as an individual-to-individual match to the Messiah figure.

The first horseman appears in some way to be a counterpart to the Messiah who also rides a white horse, wears many crowns, and conquers with his sword (or sickle as in ch. 14). In other words, there is a person to person correlation between the two images. And if the first rider is interpreted this way, and the other riders are described with the same patterns, then it is reasonable to interpret each of them as signifying some personal figure as well.

Such, in brief, are the main points of W’s case for identifying the riders of Revelation’s four horsemen with persons related to significant historical events preoccupying the mind of the author.

Next, we’ll follow this approach in assessing W’s contemporary person-historical interpretation of the red horse.