You have heard of priests who are closet atheists. Have you ever wondered why they stay in the Church? What are they thinking? Here is an explanation from one Catholic priest who lost his faith. It’s from the autobiography of Joseph Turmel who was eventually excommunicated. I have copied the passage from the online edition at Scribd. 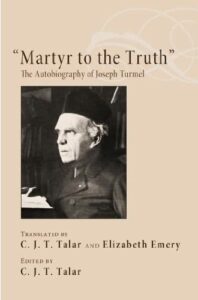 First, the life plan. What should I do? Could I remain in the Church? Ought I not to leave?

Had I posed the question to ecclesiastical authorities, their only response would have been to expel me and to make it impossible to continue a ministry that, from their perspective, could only be a horrible sacrilege. If I had let my parents and my mentor, M. Gendron, know of the state of my soul, they would have died of broken hearts. Thus I could not confide in anyone. Asking advice was not an option; and I was reduced to deciding alone the choice that would henceforth determine my life.

The decision did not require much thought; it was not long in coming.

Civil servants know that the smallest breach of duty, legal action aside, will result in an administrative suspension that will shatter their life and bring shame, sorrow or even ruin upon their family. And this formidable prospect ordinarily keeps those who would be tempted to shirk their duty faithful to it. Among the clergy the only real crime in existence is breaking the law of celibacy. When it is made public, it plunges the faithful into deep distress and astonishment. But only rarely does it come to light. Not that breaking the law is infrequent. It is just that such crimes occur in the dark. The faithful are content to shut their eyes and do not want to be made to open them; the authorities, too, do everything possible not to know and not to have to intervene. Liberties are taken with the law of celibacy; but the takers remain in the ranks of the clergy; scandal is avoided: everyone benefits.

All these thoughts went round in my mind; they haunted me, but they also imposed compelling conclusions. To lay aside the cassock that I had worn for ten years (I had entered seminary in 1876) to return to a civilian life that I had renounced by solemn oaths, would be to shatter my life, and wound my parents and my adoptive father; at the same time it would be denouncing myself publicly as guilty of a breach of duty, a crime.

What was my crime? Here the facts spoke with a bitter eloquence. I have said earlier (p. 24) how the Roman Church, through its aggressive legislation, through the tyrannical condemnations it directs against even the most modest bids for sincerity, keeps truth out of seminaries and crams aspirants to the priesthood full of falsehoods and fables. Its future ministers come to ordination with their minds filled with illusion. Then, taken up with ministry, having neither time nor taste for personal study, they generally tend to stick to the adulterated wares served up to them in seminary: they remain deceived. My crime, the result of intense labor, was to have seen through this deceit and to have refuted the lies which had ensnared me. An inexpiable crime in the view of the Roman Church, which, if she had been aware of it, would certainly have punished me. In laying aside the cassock, in leaving the clergy’s ranks, I should have let the Church win; I would have inflicted on myself the punishment that the Church, unaware of the state of my soul, could not.

In a burst of indignation I cried out: “Because I have discovered the trap in which the Church ensnares the faithful and particularly aspirants to the priesthood, I should be obliged to condemn myself and my family to dreadful sufferings? No, that will not be. Promises made at knifepoint grant no rights to the cutthroat who exacts them. They impose no obligation on the victim who signs them. They are null. The Church that systematically hid the truth from me, that fed me lies, acted like a relentless cutthroat toward her victim. Methods differ; the dishonesty is the same. The Church has no rights over me. I certainly do not have to accept the verdict it would pronounce if it knew my state because this verdict would be merely a shameful travesty of justice. I have the right to impose myself on the Church. I will impose myself, I will continue to celebrate the rites to which it has bound me. She can only blame herself for the misfortune that has befallen her in my person. Moreover, other misfortunes of the same kind will inevitably continue to occur, if she does not quickly renounce falsehood and impart honest teaching to her clergy. But she surely knows that her seminaries would empty immediately and that her aspirants to the priesthood would return to the world after a few weeks if the truth were allowed to reach them. With the current regime in seminaries, only priests who have the time and taste for study can enlighten themselves. What is this insignificant loss beside the void that would occur if the teaching given in seminary were based on respect for the truth? The Church derives too much profit from falsehood ever to deprive herself of its services.

Having decided to remain in the Church, I needed to make no change to my life. Nothing was altered, except that study henceforth benefited from the two hours previously taken up with exercises of piety.

From “Martyr to the Truth”: The Autobiography of Joseph Turmel