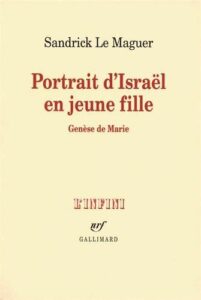 In order to gain possible insights into the origins of persons and events in the gospels, we have, over the past year and more, been attempting to read the Scriptures with the same types of “midrashic” mindsets that ancient Jewish scribes exercised. What follows is from Portrait d’Israël en jeune fille: Genèse de Marie by Sandrick Le Maguer. You may not be persuaded by all of what follows but I hope it will at least make us wonder about the possibilities.

In Part 1 we saw that Miriam was associated closely with the miracle rock or “well” that produced flowing water for Israel as they wandered in the wilderness — the rock accompanying them on their trek. (The inspiration for this association arose from Numbers 20:1-2 we read first that Miriam died and then, in the following sentence, there was no water for Israel. Rabbis put two and two together and decided Miriam’s death had to be the reason: Moses this second time had to turn on the tap by speaking to the rock but, as we know, he struck it twice with his rod instead.)

Now early Jewish exegetes compared a well of water to the Torah, the Law. In Rabba Genesis 1:4 we find, as well, an equation of Wisdom with Law.

The Hebrew word for well is “beer” (we wish!), as in Beersheba, etc., the three root consonants being beth, aleph, and resh: באר

If you feel uncomfortable introducing such a late source as Rabba Genesis then you may prefer instead to savour the Damascus Document from among the Dead Sea Scrolls. In 6:4 there we read the same interpretation, this time while discussing Numbers 21:18

The Well is the Law, and its “diggers” are the repentant of Israel who went out of the land of Judah and dwelt in the land of Damascus.

Now the same three root consonants (beth, aleph, and resh), in the same order, also mean to “make clear and plain”, as we read in Deuteronomy 27:8 in connection with how the Law was to be written:

And you shall write very plainly [באר] on the stones all the words of this law.

We can transcribe this as baar. The point is that, as Maguer would say, we here have an “over-determination” of the link between the Law and the well. What is written clearly, plainly, the root for the word “well”, is the Law.

So where does Miriam enter?

We have also seen indications that the numerical values in some words, or gematria, were an important element in rabbinic interpretations and that it is not unreasonable to think that this method was known very early. (Numerical techniques in the Gospel of John alone have been the subject of a monograph.) Now there are two types of gematria: one, row gematria, assigns a number in sequence from 1 to 22 to each of the 22 letters of the Hebrew alphabet; the other, classical gematria, does the same up to number 10 but then assigns multiples to the other numbers:

Now the word for wisdom in Proverbs 7:4 is chokmah [חכ‎מה‎]. I am not taking this passage at random. We will see that it has a most significant connection with Miriam in rabbinic interpretations.

Say to wisdom [chokmah /חכ‎מה ‎], “You are my sister,” And call understanding your nearest kin

Midrash Exodus is a late writing but we will see what thoughts it contains nonetheless and perhaps wonder about the provenance of such ideas. Midrash Exodus or Shemot Rabbah 1:22 associates each word or phrase with others in the Scriptures to find a message about the close watch God was maintaining over the fate of Moses. We see that Miriam is equated with the “Sister Wisdom” that we just read in Proverbs 7:4 — following the passage we addressed in our earlier post that makes us wonder if the evangelist describing the women “far off” from the cross expected readers to recall the image of Miriam:

So we have Wisdom=Law=Well . . . the prophetess Miriam.

We have not exhausted the well, though. Wisdom is, according to the Scriptures, hidden. In Job 28:21 …

It is hidden [ne-alamah /  נעלמה ] from the eyes of all living, And concealed from the birds of the air.

Miriam “hid” her family relationship to the infant from Pharaoh’s daughter — according to that late Exodus Midrash 1:25.

But that word for “hidden” contains the same consonant roots — fair game for the wordplay that is the meat of midrash — as another description of Miriam, and a word that has become famous as the source for the prophecy of the virgin Mary. That word is “almah”, young girl or woman. END_OF_DOCUMENT_TOKEN_TO_BE_REPLACED