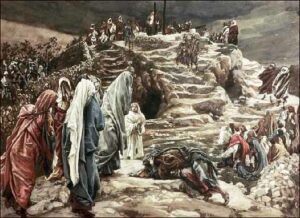 This is not the second part to the previous post that I had planned but it is related.

While exploring what the rabbinic literature had to say about Miriam I was led to focus on the fact that Miriam “stood far off to watch” what would become of her baby brother in the basket floating down the Nile. My mind immediately left the rabbinic discussion (Miriam was wanting to see how her prophecy of the saviour of Israel would pan out now that he was abandoned) and focussed on the fact that that’s how the two Marys and Salome are introduced in the Gospel of Mark: they stand “watching from far off” the crucifixion of Jesus.

And his sister stood afar off, to know what would be done to him.

There were also women watching from afar, among whom were both Mary Magdalene, and Mary the mother of James the less and of Joses, and Salome

Was that little detail meant to be what some scholars call a “flag” to alert readers to the source of the gospel narrative?

Women are the stereotypical mourners in literature and customs of the time none of the women in the gospel of Mark are explicitly said to do any mourning. The Miriam association, however, does alert us to another role of women and that is the life-givers.

Recall the suggestion that Arimathea was derived from the expression for “After Death”. Joseph does the burying — or more correctly, he lays the body in the tomb — but the women are watching the dying and the burying, looking on, “from afar”, but they move in on the third day to witness the evidence of the resurrection.

If Miriam was watching from afar to see what would happen to the hope of Israel after he was “left to his fate” in the river, she was thereby ready to enter the narrative more actively when he was pulled out of the river by the Egyptians.

When Pharaoh’s daughter took the infant, we read a quite amazing scene: Miriam, who is evidently a young girl and of a slave race, confronts the princess with her request for the baby in order to find care for it.

Now that’s an act of boldness on Miriam’s part. When in the Gospel of Mark we read that Joseph of Arimathea “boldly” approached Pilate, we try to force our minds to imagine something more than otherwise appears in the narrative. Joseph is said to be of the ruling class and Pilate was reluctant to crucify Jesus in the first place, so one would think that it would not take much “boldness” on his part to ask Pilate for Jesus’s body. Was the author thinking here of Miriam’s bold approach and request of the Egyptian princess for the rescued infant?

I’m beginning to think that our evangelist was doing more with the women at the end of his gospel than merely toss in some extras as mourners. The women were there to represent the opposite of Joseph “After Death” who buried Jesus.

Like Miriam, it is not unlikely that they were watching the crucifixion “from afar” in order to see (“midrashically”) what would become of Jesus. They represent the life sustainers. One of the Marys is said at that moment to be a mother, and a mother of a Jacob and a Joseph. Not just any “Jacob”, but a “Jacob the Younger”. A new Jacob? A new Israel? Joseph’s rise “from death” we know about.

Thus endeth my thought for the day.