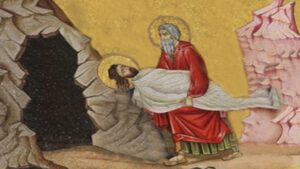 But if the author wanted to identify Jesus’ brothers with Israel’s past, why choose Simon and not Isaac or Reuben? Here is the passage, Mark 6:1-4

Then He went out from there and came to His own country, and His disciples followed Him. And when the Sabbath had come, He began to teach in the synagogue. And many hearing Him were astonished, saying, “Where did this Man get these things? And what wisdom is this which is given to Him, that such mighty works are performed by His hands! Is this not the carpenter, the Son of Mary, and brother of James, Joses, Judas, and Simon? And are not His sisters here with us?” So they were offended at Him.

But Jesus said to them, “A prophet is not without honor except in his own country, among his own relatives, and in his own house.”

Let’s convert those names into their transliterated Hebrew equivalents: Miriam, Jacob, Joseph, Judah and Simeon. And I take note of the context again: it is about prophets in the family who are not accepted by their kin. Think and consult the Scriptures…..

Mary/Miriam was a prophet who led the daughters of Israel in prophetic songs. The unit is enclosed, in good ancient style, by the message or moral of the story, followed by Mary and the sisters. 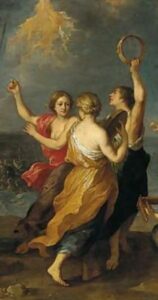 Miriam was a prophet (or “prophetess” – Exodus 15:20) whom Jewish tradition associated with the miracle of the rock that supplied water. She led the daughters of Israel (think sisters?) in singing praises to God for the miracles he performed.

Of the foundational names of Israel we have the first two names of the middle section: Jacob (who is also Israel, of course) and Joseph. They are both in the Genesis account depicted as prophets: Jacob in Genesis 49 and Joseph passim. They are also both rejected by their brethren. Jacob fled for his life from Esau and Joseph was sold by his brothers who hated him.

Next we have Judah and Simeon. Judah, like his namesake in the gospel, plotted an act of betrayal for money. Judah, hating Joseph, proposed to sell his brother to slave traders (Genesis 37:26-27). Simeon closes the list and is accordingly bracketed with Jacob and if our anagram is correct we should associate him in a negative way with the first name, Jacob. Jacob rebuked Simeon for — and I prefer the King James translation — making his reputation “stink” in the land. (Simeon in Genesis is coupled with Levi but to add Levi would spoil the pattern and rabbis were not particularly worried about cutting corners like that to make their explanations sound “true”.)

Now all of the above could well have nothing more secure to justify it than my own imagination. I have no independent evidence to suggest that that was in the mind of the author.

My point is that it is possible to draw from the Jewish Scriptures explanations that further the doctrinal message of that little pericope. The names listed, along with (or especially with) their bracketing Mary and sisters, remind one — at least they have the potential to remind one — of the prophetic tradition of Israel and the disasters that accompanied that tradition. In the middle of the prophets Miriam and the daughters of Israel we have the namesakes of early prophets of Israel who suffered rejection and disgrace at the hands of their brethren.

Hence Mary, Jacob, Joseph, Judah, Simeon and the sisters drive home the irony of the hometown people mocking their neighbour Jesus as if he “thinks he’s some sort of prophet”.

Boyarin, Daniel. The Jewish Gospels: The Story of the Jewish Christ. New York: The New Press, 2012.

8 thoughts on “Reading the Gospel of Mark as Midrash”