This post follows on from Historical Background to President Trump – the Republican Party’s Shift . . .

. . . was the term widely used during the 1980s to describe a religious social movement, while today the operative term in both self-presentation and in most media coverage is evangelical. The former carries with it a more overtly political dimension and a specific historical context, while the latter is a fuzzier term. For that reason, I prefer the term fundamentalist in characterizing movement leaders and organizations. It can be a term of disparagement, but in fact has greater analytic rigor, thus making it a more serviceable tool for analyzing this segment of American Christianity. (Kivisto, 92)

By the term fundamentalist Kivisto is referring to movements that grew out of those who in the 1920s named themselves “fundamentalists” and who identified their ideas with The Fundamentals (biblical inerrancy, miracles, etc) essays published and funded by Southern Californian oil millionaire Lyman Stewart. The Fundamentals identified a good many enemies of “truth”:

Very often fundamentalists felt obliged to enforce their views on society through political and legal action. Recall the Scopes “monkey trial” of 1925.

Martin Marty, who led a major American Academy of Arts and Sciences project on fundamentalism, offered a succinct account of what fundamentalism is and what it is not:

We never see the term fundamentalism applied to movements which are not absolutist. The enemies of fundamentalisms everywhere are relativism, pluralism, ambiguity. (Marty p. 21)

In identifying the core components of fundamentalism, Marty begins by stating that it “is always reactive, reactionary,” forever responding to “perceived challenges and threats” posed by a “force, tendency, or enemy” that is “eroding, corroding, or endangering one’s movement and what it holds dear.” As such, fundamentalism is about defining boundaries, and defining them in bright, not blurred, terms: the world is us against them, with them being a sometimes shifting target. This means, Marty continues, that fundamentalism “is always an exclusive or separatist movement” predicated on beliefs that are defined in absolutist, black-and-white terms. It is for that reason that fundamentalists are dismissive of interfaith or ecumenical understanding and dialogue, opting instead for an oppositional stance against anyone who does not share their worldview. Marty concludes that fundamentalists are inherently absolutist, and, “With absolutism comes authoritativeness or authoritarianism” (Marty, 1988, pp. 20—21). (Kivisto, 93f)

Sociologist Martin Riesebrodt points out that fundamentalists, in their rejection of the world, either elect to withdraw from it or to control it. The latter option often means they seek to impose their beliefs and practices on the world through political activity of various kinds.

The strain of world mastering fundamentalists engaging in American politics since the middle of the past century includes such now largely forgotten figures as Carl McIntyre, a dissident Presbyterian and fervent anti-communist crusader — engaged as he saw it in a civilization struggle between the Christian West and the atheistic core of Soviet communism. He was hostile to anyone seen as fellow travelers, which included groups such as the ecumenically oriented National Council of Churches, making his views known to a radio audience via his “The 20th Century Reformation Hour.” He and like-minded fundamentalists represent the precursors to the contemporary Christian right. (Kivisto, 94)

If the Southern strategy pushed the Republican Party into the camp of white nationalists, the Christian right’s self-understanding is shaped by an ideology of Christian nationalism.

The two most well known leaders were Pat Robertson and Jerry Falwell. Both evangelized extensively through mass media. Robertson created Regent University and the American Center for Law and Justice, “which aimed to shape legislative agendas and fight judicial battles”. Falwell founding Liberty University in 1971 and Moral Majority in 1979.

Certain issues have been constant ever since the 1970s:

These “world mastering fundamentalists” set themselves against “liberals, Hollywood, the media, the American Civil Liberties Union, and often, academics”, those they deem to be “enemies” who, because they are “hostile to religion and . . . are antipopulist” are therefore “fundamentally un-American“. [Compare the post on Americanism as an ideology and the treason of “un-Americanism”.] With such an outlook they (the fundamentalists) “reveal their anti-pluralist and thus intrinsically anti-democratic view of politics” (Rhys Williams).

The two targets at the top of the “un-American” list are atheists (more recently those identifying themselves as spiritual but not religious are likewise of serious concern) and Muslims.

The current animus toward Muslims reflects a long history of hostility to other religions, including anti-Semitism, anti-Catholicism, and anti-Mormonism. (Kivisto, 96)

The world according to Huckabee

The assertiveness — indeed, the militancy — of the insistence on defining America as a Christian nation belies fear that it either no longer actually is or soon may no longer be so. This perspective is on display, for example, in Republican politician Mike Huckabee’s 2015 book, God, Guns, Grits, and Gravy, which bemoans the growing secularization of the nation and the gulf between people of the heartland and liberal elites: the significant linkage in his book’s title involves God and guns, and it is also worth noting that Huckabee was also a program host at the Fox Network for several years. (Kivisto, 96)

Fact One: he is religiously illiterate

his limited acquaintance with Christianity was at the hands of Norman Vincent Peale, whose “power of positive thinking” amounted to what his biographer Christopher Lane calls “religio-psychiatry,” a vacuous amalgam that was hooked on to a version of Christian nationalism. Peale was roundly criticized by theologians such as Reinhold Niebuhr and by the psychiatric profession. In terms of his politics, he was an opponent of the New Deal welfare state and his strident anti-Catholicism led him to depict the candidacy of John Kennedy as a threat to the nation.

Fact Two: he needed to pander to this segment of the Republican base in order to win both the nomination and the election

it is not surprising that a mutual attraction developed between Trump and various big names associated with the prosperity gospel such as Detroit megachurch pastor Wayne T. Jackson and Florida-based Paula White and latter-day incarnations of the power of positive thinking such as Joel Osteen. First, all of these religious entrepreneurs share Trump’s salesmanship directed at an audience they know how to impress, and his embrace of a luxury lifestyle. Second, at the level of their respective business ventures, the parallel between their organizations and the Trump Organization is striking. And, for that matter, for the more overtly political leaders of the contemporary Christian right, there is another parallel worth noting. Just as Trump’s closely held and opaque family business is intergenerational, with the fourth generation being groomed to take over, so too are several of the prominent Christian right organizations lucrative family operations passed from father to son — from Pat to Gordon Robertson, from Jerry to Jerry Falwell, Jr., and from Billy to Franklin Graham. 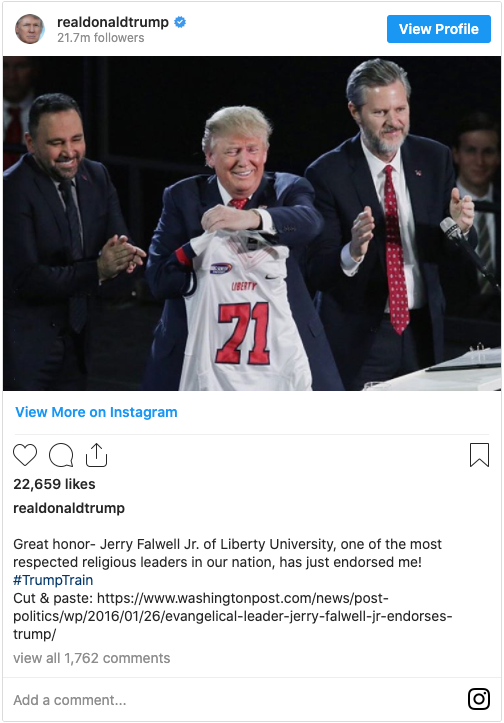 In my opinion, Donald Trump lives a life of loving and helping others as Jesus taught in the great commandment, he said 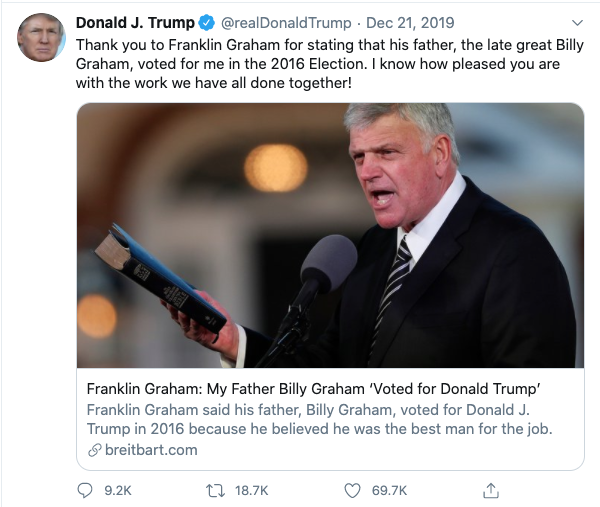 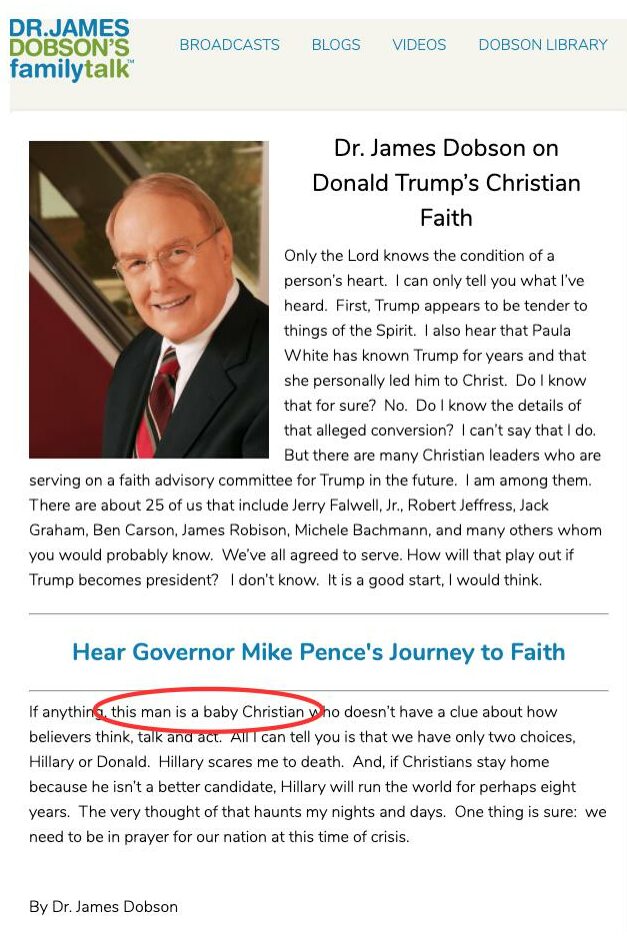 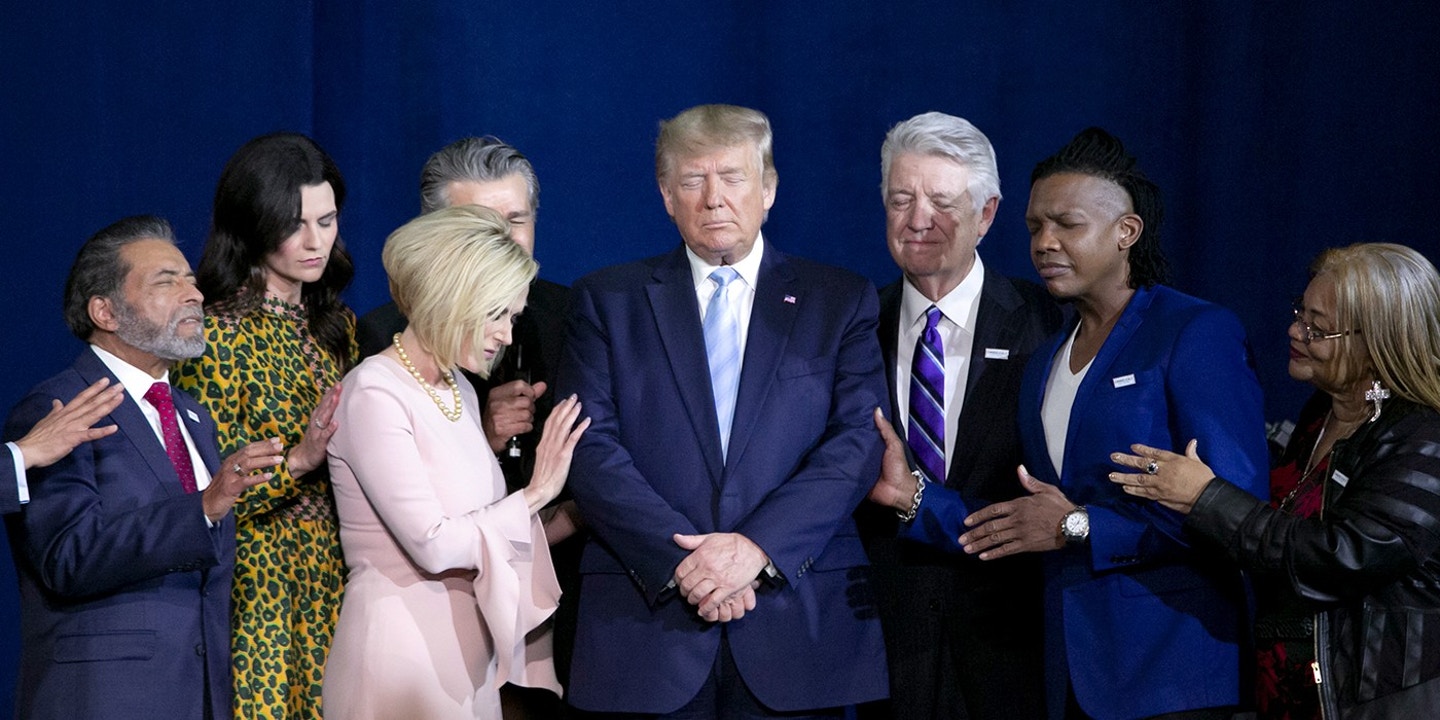 Next, the Tea Party and reactions to Obama’s presidency.

9 thoughts on “The Historical Road Leading Fundamentalist Christians to Trump”