This post begins a bare-bones outline of a few key historical developments that have brought us to where we are now. Anyone with a deep knowledge of U.S. history will find my treatment very basic indeed. I am using as a convenient source a book that sets out a basic overview of selected background developments that led to Trump’s ascendancy, Peter Kivisto‘s The Trump Phenomenon: How the Politics of Populism Won in 2016. (You can read the book online at Scribd. A couple of reviews will give you some idea of what others have seen as its strengths and weaknesses.) I am only selecting a few areas of Kivisto’s discussion in these posts. Developments in the media and political propaganda are most significant but I want deeper preparation before posting on that side of things. A related blog series is Fraser: From Progressive Neoliberalism to Trump; also, America’s Radical Right in Context (Lipset Revisited). I have added hyperlinks copiously for the benefit of anyone (like me) who uses these sorts of outlines as springboards for further reading.

From World War 2 to the 1960s the two major political parties were both centrist:

On the John Birch Society:

Both passed with bipartisan support. (Democrats controlled both houses of Congress and the legislation was advanced by the Democrat President Lyndon Johnson.) But in each case the Republican Party marshalled a larger percentage of its members in support of each bill than the Democrats did.

Why was there less support for these bills among Democrats? Answer: the Dixiecrat faction in the Democratic Party.

Compare the reactions to the Social Security Amendments Act (1965):

Despite Republican support for the Civil Rights and Voting Rights Acts, Johnson saw the writing on the wall: the Democratic coalition was about to unravel as the South, a once solidly Democratic region, was about to exit the party. Bill Moyers, then an aide to Johnson, reported that the President told him, “I think we just delivered the South to the Republican Party for a very long time to come” (Moyers, 2004, p. 167).

For its part, the Republican Party opened its arms, with Richard Nixon implementing his “Southern strategy.” In researching a biography of Nixon, John A. Farrell discovered a document in which Nixon, during the 1968 presidential campaign, promised these new arrivals to the party that he “would retreat on civil rights and ‘lay off pro-Negro crap’ if elected” (2017, p. 9).

The Republican Party of Lincoln was also sliding into another place:

At the same time, liberal and moderate Republicans elsewhere in the country were confronted with challenges from the right by opponents who were hostile to their centrism and their commitment to civil rights. Thus began what Purdum describes as “the long process by which the Party of Lincoln became the party of white backlash, especially |but not only] in the South” (2014b, p. 3).

Also, the shift of the once Democratic South to a solid Republican base was secured . . . 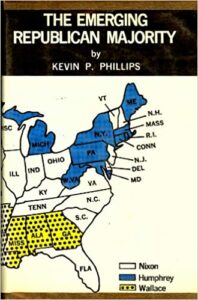 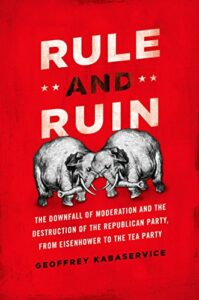 The 1970s set the stage for the final destruction of a center-right conservative party and the solidification of a reactionary one — a party in which people associated with the former were increasingly condemned by those in the latter camp as being Republicans in Name Only (Kabaservice, 2012).

The rise of Ronald Reagan to national prominence . . . in 1980 further signaled this rightward shift. Thus, Reagan launched his 1980 post-convention campaign in Philadelphia, Mississippi, the site of the brutal murder of three civil rights workers in 1964. Far from being there to memorialize their martyrdom, he was there to inform whites that he was on their side, using the coded language of states’ rights. The person who arranged this visit was Republican operative Paul Manafort, who would serve the Trump campaign until his Russian connections made it too problematic for him to continue in that role. His place in Republican politics from Reagan to Trump reflects a white nativism that has, arguably, defined the party ever since the implementation of the Southern strategy. It led to recurrently stoking racial fears and antagonisms, as with Lee Atwater’s Willie Horton (a convicted murderer who went on a crime spree while on furlough) television advertisements on behalf of his boss, George H. W. Bush. (Kivisto, 91f)

The next two historical waves are the emergence of the Christian Right and then the reaction to Barack Obama’s election. Those developments will be discussed next.