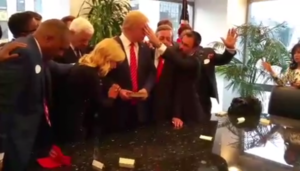 SO HOW DID the amoral Trump come to be beloved by evangelical voters, a question that remains one of the abiding mysteries to this day? Begin with the premise that Donald Trump hadn’t darkened the door of a church or chapel since the age of seven, as he would openly admit in his past incarnation. Places of religious worship held absolutely no interest to him, and he possessed precisely zero personal piety in his life—but he knew the power of religion, and that was a language he could speak.

I lived in Trump Park Avenue and one of my neighbors was an evangelical pastor named Paula White. She had known Trump for more than a decade, after he’d seen her show on TV and he’d invited her to come to Atlantic City to give him private bible studies, her version of prosperity gospel the only conceivable version of Christianity that could appeal to Trump. Self-interested, consumed by the lust for worldly wealth and rewards, with two divorces, one bankruptcy, and a Senate financial investigation—she was a preacher after Trump’s heart. The fact that she was beautiful and blonde didn’t hurt, either.

As part of the division of labor in the campaign, I was assigned to lead the outreach to faith communities on behalf of Trump, mostly because having Roger Stone attempt to make those connections would be a farce. It was at this time that Paula White called me and said that she wanted to put together a group of evangelical leaders to meet with Trump to discuss his potential candidacy and the spiritual and political dimensions of his campaign. The idea was for Trump to solicit their support, so I readily agreed to help put the session together. More than fifty religious leaders came to Trump Tower to meet the Boss in a conference room on the 25th floor. Some of the most famous evangelicals in the country were there, like Jerry Falwell Jr., Pastor Darrell Scott, and Dr. Creflo Dollar, an Atlanta preacher who would later be charged with choking his daughter and ridiculed for soliciting contributions from his parishioners so he could
purchase a $65 million Falcon 7X private jet to “safely and swiftly share the Good News of the Gospel worldwide.”

As an organizer, I went to watch the proceedings, and what I saw was amazing, to put it mildly. Sitting around the long conference room table, the group started to discuss Trump’s three marriages, his views on abortion, homosexuality, family values, America’s role in the world, and God’s place in the Boss’s heart. As a little kid, Trump’s family had attended Marble Collegiate Church in Manhattan, where he listened to the sermons of Norman Vincent Peale. The Protestant preacher was the author of The Power of Positive Thinking and an early radio and television star, sermonizing about the materialistic advantages of American conservative religion, making him a hero to the folks meeting with Trump as a pioneer in blending or conflating wealth and Jesus in a way that somehow found the Son of God was all about the bling.

Trump milked the Norman Peale connection like a dairy farmer at dawn, not letting one drop spill. Peale’s version of God’s word revolved around tall tales he told that were completely unverifiable and calling for the banishment of thoughts or emotions that were negative, which must have penetrated young Donny Trump’s consciousness as a boy. Trump always lived in the present tense. He never looked backwards, except in anger or to blame others, which was part of Peale’s appeal to his followers. When Trump was sitting in the pews as a boy, Peale was one of the most famous pastors in the world, which had to impress the kid, but it was likely the cultlike egomania that he urged Christians to follow that seemed to have penetrated the little Donny’s impressionable brain, no doubt reinforced by his taskmaster father and hyper-ambitious mother.

As the evangelicals inhaled Trump’s Norman Peale horse shit, they solemnly asked to approach him to “lay hands” on him. I watched with bated breath. Trump was a massive germophobe, as I’ve noted, so the idea of dozens of sets of hands touching his clothing and skin would appall him, I knew. But even this didn’t faze the Boss: he closed his eyes, faking piety, and gave the appearance of feeling God’s presence as the assembled group called for guidance in determining the fate and fortune of Donald Trump, America, and the message of Jesus Christ.

If you knew Trump, as I did, the vulgarian salivating over beauty contestants or mocking Roger Stone’s propensity for desiring the male sexual organ in his mouth, as he would say less politely, you would have a hard time keeping a straight face at the sight of him affecting the serious and pious mien of a man of faith. I know I could hardly believe the performance, or the fact that these folks were buying it.

Watching Trump, I could see that he knew exactly how to appeal to the evangelicals’ desires and vanities—who they wanted him to be, not who he really was. Everything he was telling them about himself was absolutely untrue. He was pro-abortion; he told me that Planned Parenthood was the way poor people paid for contraception. He didn’t care about religion. Homosexuals, divorce, the break-up of the nuclear family—he’d say whatever they wanted to hear, and they’d hear what they wanted to hear. This was the moment, for me: the split second when I knew Trump would be president one day. It was an intuition, but it was also based on the intangibles. Trump’s answers to their questions were compassionate, thoughtful, Godly, in a way that I knew in no way reflected his beliefs or way of seeing life. He could lie directly to the faces of some of the most powerful religious leaders in the country and they believed him—or decided to believe him, a distinction with a real difference. Trump was imperfect, they knew, with his multiple marriages and carefully cultivated reputation as a womanizer. But he knew what they really cared about—the core, core, core beliefs. Anti-abortion laws, Supreme Court justices, opposition to gay marriage and civil rights, and the cultural war-like rhetoric aimed at godless liberals. That was Trump’s rat-like cunning, and it was a talent I knew then that he would ride all the way to the White House.

The prayer over, Trump opened his eyes as if he had indeed been in deep meditation and conversation with God.

“What do you think about me running for president?” Trump asked Pastor White in a reverent tone.

There was a silence in the room, as bowed heads were raised and eyes opened. This was no longer a question about the ambitions of a billionaire celebrity—it was about the soul of the nation; the Almighty was being summoned to guide the faithful. Paula White was very serious as she talked in a low voice, addressing the assembled in a passionate but measured way, Trump listening with yet more fake piety.

“I don’t think the time is right,” she replied, slowly.

“I don’t either,” Trump said, also slowly, carefully, and thoughtfully.

Some interesting visuals in this clip: