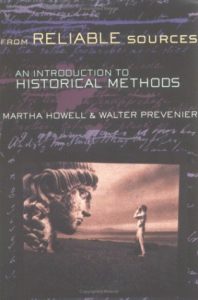 Warning: For new readers only. This post is essentially a repeat of a March 17th post this year. So if you were not paying attention back then . . . .

Once again a forum post I wrote over a year ago, Rules of Historical Reasoning, has come in for indirect attention from Religion Prof.

When sharing a recent blog post on social media, I offered some thoughts on how academic study works at its most basic level. Here is what I wrote, with some minor improvements and alterations to the wording:

Reading some online discussions, you’d think that there is a need for people on those blogs and discussion boards, with no particular expertise in or professional connection with the study of history, to come up with their own methods for historical study. Not that they don’t talk about what historians and scholars past and present have done and do. But they talk about the methods as though they themselves actually use them regularly to investigate historical questions and so are poised to assess their value, and indeed better poised that professionals who do in fact use them, daily.

The “discussion boards” link is to my forum post. Far from suggesting that my post in any way implied that amateurs do or should “come up with their own methods for historical study” the whole thrust of the post was that academic historians explain and justify the methods that they, as academics, use. And far from suggesting that biblical scholars investigating the question of the historical Jesus “do in fact use” those same methods, the whole thrust of the post was that as a rule biblical scholars addressing the historical Jesus part company with their historian peers in non-biblical fields.

The same criticism of my post was made in mid March this year and I responded at that time with a copy of my forum post. I copy that forum post again here, but preface it with a link to a fuller discussion by a historian of ancient history of some renown, M. I. Finley:

An Ancient Historian on Historical Jesus Studies, — and on Ancient Sources Generally

(I have discussed aspects of Howell and Prevenier’s book on this blog e.g. How Historians Work — Lessons for historical Jesus scholars — and more generally.)

‘historiographical manuals’ – those books written for the student of history, and in particular postgraduate or PhD students of departments of history 4. . . .

….All historiographical claims should be based on the source…. What follows are five points concerning the use of sources, each of which is consistently emphasized by pedagogical material of the above kind.

(1) ….. the historian should prioritize primary sources, though should nonetheless be critical of these sources.

Primary sources are those which

transport the historian directly back to the past that the documents describe and of which they were a part, permitting the historian knowledge of that past without the accretion of subsequent interpretation and tradition.

It follows that we have no primary sources for persons or events in Galilee in the 20s/early 30s.

(2) Criticism of sources is two-fold; not only with regard to the claims of those sources concerning their intended topic, but with regard to the implicit claims of those sources concerning themselves. The second sort of criticism is the investigation into the document’s authenticity, established by asking whether the author could have written it, whether they could have been where they claimed to be, whether the paper, authorial style and handwriting permit the truth of the self-proclamation of the author. …

The historian of Christian origins who wishes to start in Galilee in the 20s is behind the eight-ball at the start. None of the above basic criticism can be applied to primary sources because there are no primary sources.

So we move to secondary sources: we still cannot apply the above rules to our gospels because we don’t know who their authors were or claimed to be, and we have in the case of the epistles only a name, Paul, with no independent means of assessing any of the internal claims.

(3) Source criticism is extended beyond the establishment of the identity of the author, to so-called ‘internal’ features of the source: the author’s aim, their ideological background and their intended audience. It is assumed that knowledge of these facts will aid the historian’s use of the source. (Exemplification of this point has already been suggested, in the case where the historian would be wise to find out whether the author had reason to lie, and why they might have done so.)

Again, fundamental questions that historians normally apply to primary sources cannot be asked by anyone wanting to address events in Galilee in the 20s. If we apply this rule to secondary sources we still find ourselves in something of a circular trap given that we do not know the authors apart from the self-testimony of one of them. But still, we can make some tentative assessments of the internal features of the sources.

(4) Source criticism should also trace the path connecting the source with the historian, asking why it has survived and in the form that it has. …

(5) The historian is warned not to depend too much on a single document, but rather to utilize a wide range of evidence. This warning is to some extent implicit in the demand for source criticism, since it is obvious that no serious source criticism can proceed without employing knowledge gained from other sources.

Again the historian who wishes to explore persons in Galilee in the 20s is greatly disadvantaged since not only do we have no primary sources at all, but even the secondary sources all derive from a common ideological bucket. The first gospel written was in dialogue, it seems, with Paul, and the other three gospels were in dialogue with that first gospel. We do not have a “wide range of evidence”. It is all very incestuous.

Yet some historians claim to be able to do better without any of the above rules and that they can even go right back to the gist of words spoken between X and Y etc by means of going “beneath” the secondary (not even primary) sources by means of criteria and memory theories. One does have to wonder at why other historians bother with any of the above rules when biblical scholars can bypass all of that and get more detailed information from late secondary sources by means of totally different methods.