Skip to content
Apart from archeological evidence, the only facts we can attain are the texts. We must therefore reason about the texts that relate facts, not about the facts related by the texts. 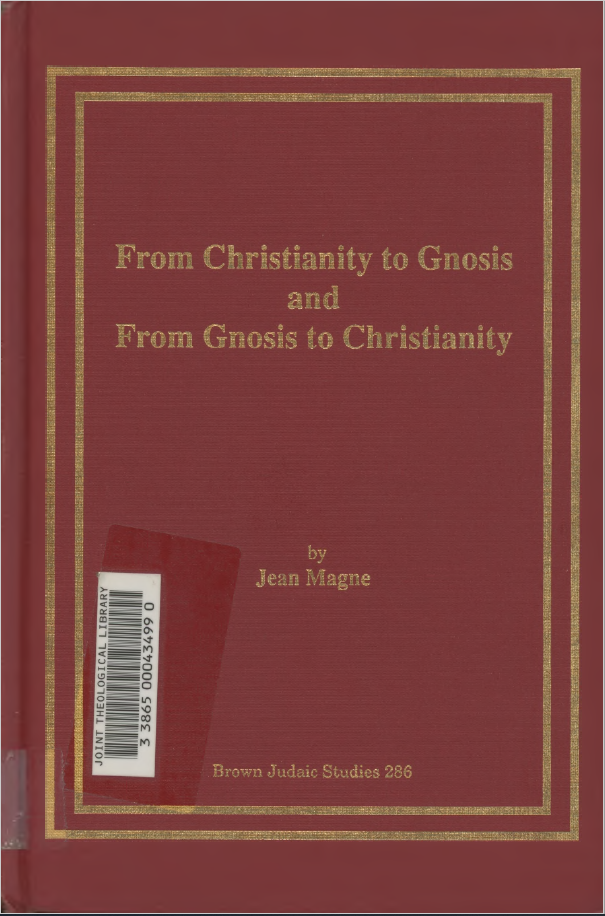 Yesterday I completed reading a most unexpected argument (an argument that led to the conclusion that Christianity did not originate with a historical Jesus) in a book I borrowed on the understanding it would do nothing more for me than clarify a few textual details about our early accounts of the Last Supper. I was following up sources associated with my earlier post, The Two Steps to move the Lord’s Celebratory Supper to a Memorial of his Death.

I see now that if I had paid more attention to a few bibliographies of mythicists here and there on the web and to Klaus Schilling’s summaries/translations (here and here) I might have been forewarned. But I came to the name Jean Magne and some of his works in mainstream scholarly literature and had no forewarning.

The book I am talking about is From Christianity to Gnosis and from Gnosis to Christianity: An Itinerary Through the Texts to and from the Tree of Paradise. Its Introduction arrests us with

The following pages set out the results of my investigations which started in 1945 soon after my return from captivity in Germany.

From Christianity to Gnosis and from Gnosis to Christianity (1993) consists of a partial translation of Logique des Sacrements (1989) and the complete translated text of Logique des Dogmes (1989). Anyone even slightly aware of prominent names in biblical scholarship could not fail to be somewhat impressed by the mention of Neusner in the same Introduction:

I would like to reiterate . . . my heartfelt gratitude to Professor Jacob Neusner who prompted this publication, writing to me on February 19, 1990: “I found your thesis entirely plausible. If you can get the book translated into English, I can get it published in a series I edit”, and again on April 23: “I thought your book showed how first-rate scholarship could produce a compelling and important thesis. This is why I wanted it in English”.

Earlier I had attempted to work my way through the original French text of Jean Magne’s “Les Paroles Sur La Coupe” [literally “the words on the (eucharist) cup”] and found the French very difficult indeed, so I was somewhat sympathetic to several of the infelicities in the English translation of Magne’s book in English.

The first part of the book, “From Christianity to Gnosis”, focuses on the textual evidence we have (canonical gospels, Paul’s letters, the Didache) for the origins of the current ritual of the eucharist/Lord’s Supper/Mass. What particularly struck as I read was the author’s method. This could be epitomized by the epigraph at the beginning of Magne’s second chapter:

My search for the author of that epigraph eventually led me to the following explanation.

Dom Maerten’s criticism highlighted the difference which exists between the historical method based on authentic, dated documents and the critical method which, like an archeologist when he excavates, has to distinguish between the various redactional layers in biblical or liturgical documents. Errors of syntax are one of the means of reconstructing the prehistory of a text in order to attain History. The historian’s shortcoming lies in his frequent inability to distinguish between two literary genres : works that have an author and works of living literature where each generation has added its contribution.

Now that little point suddenly reminded me of another work I read and wrote about last year: Divine Revelation Not Limited to the “Bible Canon”. Revelation among many learned Judeans was not considered sealed up in a single book, but was always open to new understandings so that works in the names of certain authors multiplied. Adding to an existing text is not the same thing but it is similar. Did not the author of Revelation address this very practice when he pronounced a curse on anyone who would tamper with what he had just written — which ironically looks like something written over and around another earlier (non-Christian) text!

I cannot agree more with the first quote that speaks of the need to “reason about the texts that relate facts, not about the facts related by the texts”. But when it comes to the particular method of reasoning as set out in the second quotation I have some niggling doubts.

So when Jean Magne showed how textual inconsistencies in the various sources appeared very much to be resolved by fitting Jesus words that he would not drink the cup again until in the kingdom back into the gathering at Bethany and not on the Passover itself just prior to Jesus’ crucifixion, I was fascinated. The Last Supper ritual of the Passover evening when Jesus declared the bread and wine to be his body and blood, etc. was a later addition to the Gospel of Mark. An earlier version of that gospel placed the arrest of Jesus immediately after his anointing for burial at Bethany.

I found the argument intriguing (and still do) but at the same time, and especially after many more such arguments relating to the various gospels and epistles, one is left with a very neat and very new picture of the evidence. It’s like the way the archaeologists found scattered pieces of an inscription at Tel Dan and studied to see the way they best fit together to make the most sense. Except with the texts we begin with texts that are already in one piece, only with lots of curious inconsistencies or non sequiturs in them that years of familiarity has very often hidden from us.

The point I am getting to is that after finding such nice fits by sifting out earlier from later strata one is left wishing one could find some additional independent source to test the new reconstructions. Have we built a new house of cards?

So I remain intrigued by Jean Magne’s arguments but I am also held in suspense, waiting for “the proof” to come along to confirm or demolish them. What I really would need to do, pending that moment, would be to devote considerable time and energy to a detailed study of Magne’s arguments and not simply rely upon a single reading of his book.

The general case Magne presents is that although our surviving gnostic texts (Apocryphon of John, Hypostasis of the Archons, On the Origin of the World, Testament of Truth) are comparatively late, he finds that earlier Jewish and Christian texts (including the Dead Sea Scrolls) are best explained in places as attempts to refute the arguments that are often found in those later gnostic writings, or sometimes even advance them. The surviving forms of the gnostic works have themselves introduced efforts to rebut those earlier rebuttals. The Pseudo-Clementine writings about the contest between Simon Magus and Simon Peter may well attest to the real debates that were extant much earlier at the time of Paul and the authors of the gospels. (We know, of course, of the arguments from Roger Parvus, Hermann Detering and Robert M. Price that identify Paul with Simon Magus.)

Before I fully grasped the extent of this argument I was struck by a passing comment on 1 Cor. 2:8 that I had posted about at length. END_OF_DOCUMENT_TOKEN_TO_BE_REPLACED