Many of you have read historian Christopher R. Browning‘s essay, The Suffocation of Democracy or at least Chauncey Devega’s interview with him about the essay on sites like Salon or Alternet. Many American readers will be very familiar with what follows. I found it helpful to set out these notes from Browning’s essay and I have (mostly) resisted temptations to intersperse them with any further commentary of my own.

Browning acknowledges broad parallels between what is happening in the United States today with her domestic and foreign courses in the 1920s, and even with 1930s Germany. But the differences are also stark, so stark and dramatic that it is easy to underestimate the seriousness of what is happening in the United States since Obama’s presidency and now under Trump. History rarely repeats, but it does echo and rhyme.

Today, President Trump seems intent on withdrawing the US from the entire post–World War II structure of interlocking diplomatic, military, and economic agreements and organizations that have preserved peace, stability, and prosperity since 1945. His preference for bilateral relations, conceived as zero-sum rivalries in which he is the dominant player and “wins,” overlaps with the ideological preference of Steve Bannon and the so-called alt-right for the unfettered self-assertion of autonomous, xenophobic nation-states—in short, the pre-1914 international system. That “international anarchy” produced World War I, the Bolshevik Revolution, the Great Depression, the fascist dictatorships, World War II, and the Holocaust, precisely the sort of disasters that the post–World War II international system has for seven decades remarkably avoided.

I sat in school learning about those post WW2 structures understanding that they were designed to prevent the a repeat of the chaos of the 30s and 40s. I had naively assumed we all knew the reasons for them and would never think of abandoning them.

Hindenberg had been elected president in 1925 and given emergency powers to defend German democracy in the event of any crisis.

Enter the Great Depression and the “hyperpolarization of German politics”.

Hindenberg began appointing chancellors “who ruled by decree rather than through parliamentary majorities”, given the impossibility of forming ruling majorities in the fractured political landscape. Enter the appointment of Hitler.

The traditional conservatives believed they would by able to easily control the popular Hitler. And at the beginning they were getting all they could hope for and much more:

Paul von Hindenburg had been given powers to protect democracy but abused them so that he saw the end of democracy in Germany.

On February 13, 2016, Supreme Court Justice Antonin Scalia died. Later that day, McConnell issued a statement indicating that the U.S. Senate would not consider any Supreme Court nominee put forth by President Barack Obama to fill Justice Scalia’s vacated seat. “‘The American people should have a voice in the selection of their next Supreme Court Justice. Therefore, this vacancy should not be filled until we have a new president,’” McConnell said. On March 16, 2016, President Obama nominated Merrick Garland, a Judge of the D.C. Circuit Court of Appeals, to the Supreme Court. Under McConnell’s leadership, Senate Republicans refused to take any action on the Garland nomination. Garland’s nomination expired on January 3, 2017, with the end of the 114th Congress. In January 2017, Republican President Donald Trump nominated Neil Gorsuch to fill the Court vacancy; Gorsuch’s nomination was confirmed on April 7, 2017. (Wikipedia)

If the US has someone whom historians will look back on as the gravedigger of American democracy, it is Mitch McConnell. He stoked the hyperpolarization of American politics to make the Obama presidency as dysfunctional and paralyzed as he possibly could. As with parliamentary gridlock in Weimar, congressional gridlock in the US has diminished respect for democratic norms, allowing McConnell to trample them even more. Nowhere is this vicious circle clearer than in the obliteration of traditional precedents concerning judicial appointments. Systematic obstruction of nominations in Obama’s first term provoked Democrats to scrap the filibuster for all but Supreme Court nominations. Then McConnell’s unprecedented blocking of the Merrick Garland nomination required him in turn to scrap the filibuster for Supreme Court nominations in order to complete the “steal” of Antonin Scalia’s seat and confirm Neil Gorsuch. The extreme politicization of the judicial nomination process is once again on display in the current Kavanaugh hearings.

Result: judiciary can only be appointed when President and Senate belong to same party. Hence separation of powers (executive, judiciary, legislative) is in jeopardy.

Trump’s personal “idiosyncracies” do not detract from the benefits of his rule for those who have made their alliance with him:

Like Hitler’s conservative allies, McConnell and the Republicans have prided themselves on the early returns on their investment in Trump.

Hitler and Mussolini were allowed to take power largely as a consequence of the virulent divisions of the leftist parties:

The Catholic parties . . . liberal moderates, Social Democrats, and Communists did not cooperate effectively in defense of democracy. In Germany this reached the absurd extreme of the Communists underestimating the Nazis as a transitory challenge while focusing on the Social Democrats—dubbed “red fascists”—as the true long-term threat to Communist triumph. 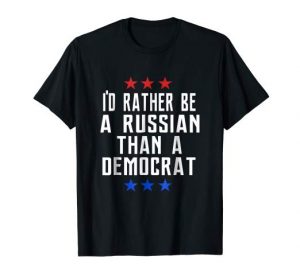 the democratic forces . . . had learned the painful lesson of not uniting against the fascist threat. . . . In France the prospect of a Popular Front victory and a new government headed by—horror of horrors—a Socialist and Jew, Léon Blum, led many on the right to proclaim, “Better Hitler than Blum.”

We are familiar with the Trump lines of defence:

First: claim there was no collusion; the claim is a hoax

Second: collusion is not a crime; Russia’s meddling had no effect END_OF_DOCUMENT_TOKEN_TO_BE_REPLACED