Until recently, I had never heard of the stories former slaves told regarding appearances of Abraham Lincoln in the antebellum South. But it turns out many freed slaves told stories they apparently believed to be true in which the president (or president to-be) showed up in person to find out what was really happening on Southern plantations.

In most cases, white Southerners who came in contact with Lincoln did not know who he was. And in this way, he appears to be playing the role of trickster. Sometimes he’d even sleep in the master’s house.

I think Abe Lincoln was next to [the Lord]. He done all he could for [the] slaves; he set ’em free. People in the South knowed they’d lose their slaves when he was elected president. ‘Fore the election he traveled all over the South and he come to our house and slept in the old Mistress’ bed. Didn’t nobody know who he was. (Bob Maynard, Weleetka, OK)

While sojourning there, the disguised future president observed the ill treatment of the slaves. He noted their meagre pay: “four pounds of meat and a peck of meal for a week’s rations.”

He also saw ’em whipped and sold. When he got back up north he writ old Master a letter and told him he was going to have to free his slaves, that everybody was going to have to, that the North was going to see to it. He also told him that he had visited at his house and if he doubted it to go in the room he slept in and look on the bedstead at the head and he’d see where he writ his name. Sho’ nuff, there was his name: A. Lincoln. (Maynard)

Other times, Lincoln appeared in disguise.

Lincoln came [through] Gallitan, Tennessee, and stopped at Hotel Tavern with his wife. They was dressed [just like] tramps and nobody knowed it was him and his wife till he got to the White House and writ back and told ’em to look ‘twixt the leaves in the table where he had set and they sho’ nuff found out it was him. (Alice Douglas, Oklahoma City, OK)

Reading these tales, perhaps you reacted as I did, thinking of the appearance of Jesus on the Road to Emmaus:

28 As they came near the village to which they were going, he walked ahead as if he were going on. 29 But they urged him strongly, saying, “Stay with us, because it is almost evening and the day is now nearly over.” So he went in to stay with them. 30 When he was at the table with them, he took bread, blessed and broke it, and gave it to them. 31 Then their eyes were opened, and they recognized him; and he vanished from their sight. 32 They said to each other, “Were not our hearts burning within us while he was talking to us on the road, while he was opening the scriptures to us?” (Luke 24:28-32, NRSV)

Of the two followers on the road, why is it, we wonder, do we learn only one of their names (Cleopas)? Why is the other anonymous? I think the narrative invites us as readers or listeners to put ourselves in the place of the actors. We are telling our disguised traveling companion what happened to Jesus. We ask the stranger to eat with us. Finally, Jesus reveals himself to us. More than just a story about recognition, in the Road to Emmaus, the evangelist relates a story about our participation in the presence of Christ. The appearances of Lincoln in the South are similar kinds of stories. William R. Black, in a highly perceptive article in The Atlantic, writes: END_OF_DOCUMENT_TOKEN_TO_BE_REPLACED 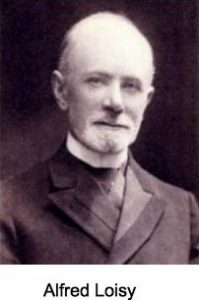 While speaking about the origin of the Lord’s Supper discussions prompted me to revisit the question of the integrity of our canonical texts and whether we can be confident they preserve what was originally written by Paul and the author of the Gospel of Mark.

Well, I’ve tracked down several studies on just that question and though I will have to wait a few weeks before a number of them arrive I can post the arguments of one critical scholar, Alfred Loisy. Loisy set out his reasons for believing that the passage in Paul’s first letter to the Corinthians in which he claims to have received the instructions about the Lord’s Supper from the Lord himself is a later addition, and similarly for the passage in the Gospel of Mark narrating Jesus instituting a mystical rite the eve before his death. On the contrary, Loisy argues, before the ritual of the death of Jesus the Christian communities knew only of a celebratory fellowship meal that anticipated the imminent arrival of the Kingdom where they would all be feasting with Jesus Christ.

20 When ye come together therefore into one place, this is not to eat the Lord’s supper.

21 For in eating every one taketh before other his own supper: and one is hungry, and another is drunken.

22 What? have ye not houses to eat and to drink in? or despise ye the church of God, and shame them that have not? what shall I say to you? shall I praise you in this? I praise you not.

23 For I have received from [ἀπὸ] the Lord [τοῦ Κυρίου] that which also I delivered unto you, that the Lord Jesus the same night in which he was betrayed took bread:

24 And when he had given thanks, he brake it, and said, Take, eat: this is my body, which is broken for you: this do in remembrance of me.

25 After the same manner also he took the cup, when he had supped, saying, this cup is the new testament in my blood: this do ye, as oft as ye drink it, in remembrance of me.

26 For as often as ye eat this bread, and drink this cup, ye do shew the Lord’s death till he come.

Many of us who have read the above passage may at some time, especially when we first encountered it, have had some “back of our mind” sense that there was something slightly odd with it. But of course repetition when and where all around us evidently accept it as unproblematic dulled our curiosity. But Loisy revives and sharpens our early questions:

Direct revelation or from apostolic tradition?

35 There has been much dissertation about the meaning of the preposition από (before τον κυρίου in verse 23), which need not exclude intermediaries between Jesus and the author of the story. But on the hypothesis of intermediaries, as the matter concerns an act of the Christ and not a plain teaching, we should expect περί rather than από. The author places the case of the Supper among the other παραδόσεις which the Corinthians have received from him. Are all these to be transformed into Gospel traditions passed on by the Galilean apostles? Moreover, whether it be tradition or private vision, the story as here given is not in the primitive Gospel.

Some strange features confront us in this passage.

On the other hand it is significant that regard is here paid to that expectation. Evidently the vision of the institution of the Supper which Paul professes to have had is conceived in the framework of a story relating the last meal of Jesus with his disciples in which preoccupation with the Great Event was the dominant feature.

In the economy of the Supper as a mystic rite this reference to the parousia, made at a time when it was no longer thought of as imminent, is out of place. The mention of it is due to an old and firmly established tradition. There is ground therefore for saying that mystic commemoration of the saving death, the mystic communion with the crucified Christ, is superposed on a form of the Supper as an anticipation of the banquet of the elect in the Kingdom of God, a form clearly indicated in a saying embedded in the oldest tradition of the synoptic Gospels:

Verily, verily, I tell you
that I will drink no more
of the fruit of the vine,
Until that day
when I drink it new
in the Kingdom of God.

The account of the mystic Supper, in First Corinthians, belongs to the evolution of the Christian Mystery at a stage in the development of that mystery earlier than Justin, earlier even than the canonical edition of the first three Gospels but notably later than Paul and the apostolic age. It must be dated in the period when the common meal was in process of transformation into a simple liturgical act. The passage in question is a conscious attempt to further the transformation by giving it the apostolical authority of Paul. . . .

Loisy suggests that the transformation was made some time in the late first century or early second century, towards, say, the time of Marcion (who esteemed Paul as his sole apostolic authority) in 140 CE.

That makes sense to me. In my earlier post I referred to early traditions, clearly in tension with the one we read in 1 Cor 11: 23-26, that speak of a Lord’s Supper as a happy fellowship occasion for thanksgiving and with no connection at all with mystic symbolism of blood and flesh.

But what of the canonical gospels? If the mystical ritual in Paul’s letter was not part of what Paul himself wrote, and if the earliest canonical gospel that of Mark, was (as some argue – Tarazi, Dykstra, R.G.Price) indebted to Paul’s ideas, how do we explain the gospel account of Jesus instituting that ceremony? END_OF_DOCUMENT_TOKEN_TO_BE_REPLACED