Continuing directly on from my previous post I address here the two most well-known Athenian trials that mirror the Pentateuchal laws against private and innovative religious practices and deities.

We saw that biblical law condemned all worship that was not centred on the official public shrine or temple. Any form of insult towards the gods or violation of formally ordained rituals regarding offerings, sacrifices, etc was also condemned, often with the death penalty.

Interestingly we find records of the actual carrying out of these kinds of laws in fifth and fourth century BCE Athens.

415 BCE, mutilation of herms and the profaning of the Mysteries

In a single night all the stone herms standing in Athenian doorways and temples were mutilated. The perpetrators were unknown.

Tension was doubly high because Athens was about to send a naval expedition to Sicily in an attempt to turn the tide of their war with Sparta and the desecration was, so the historian Thucydides tells us, both an ill-omen and part of a political conspiracy against the state.

Pleas went out for anyone with any information at all to come forward. The only respondents were resident aliens and slaves who testified about some earlier desecrations

and also about the performance of the Mysteries in private houses . . . .

The scandal of sacrilege was avalanching on the eve of a vital military campaign and fears of anti-democratic traitors seeking to subvert the government.

Accusations flew and informers (true or false) came forward when promised immunity. Many were denounced for the mutilation of the herms and imprisoned. Thucydides again,

as for the accused, they held trials, and they executed all those who had been arrested and sentenced to death those who had fled, publicly offering money to anyone who killed them.

Enemies of a key political and military figure leading the Sicilian expedition, Alcibiades, sought to bring his career to an end by putting him on trial for performing private ceremonies of the Mysteries. Recall the requirement that honest worship be held in public according to set rituals at designated temples. Alcibiades was convicted though absent from the court and sentenced to death.

The term for his being charged for such a crime was eisangelia that is translated as “impeached”. Gmirkin discusses such “religious crimes” as tied up with legislation relating to treason against the state. And that’s how such deviations from socially sanctioned worship were treated in Athens — as threats to the welfare and survival of the political order of the state.

Specifically, Alcibiades was guilty of

in violation of the lawful practices and rules established by . . . the priests of Eleusis. (Plutarch, Alcibiades, 22.4-5)

For those not aware of the story Alcibiades escaped from the Athenians to avoid execution.

One person who was arrested for both the mutilation of the herms and violation of the Mysteries but avoiding the death penalty when he turned informer was Andocides. He spent twelve years in exile but on his return was again accused and facing the death penalty because he “had illegally placed a suppliant-branch in the … temple of Demeter and Persephone in Athens.” In one account,

he has come into our city, sacrificed at the altars where he was not permitted, attended the sacred rites concerning which he had committed impiety [êsebêsen], entered the Eleusinion, and washed his hands with the holy water.

Andocides conducted his own defence and was acquitted.

When we read in the Bible of priests being struck dead for presuming to offer the wrong sort of fire in the temple, or of kings being condemned and cursed for offering sacrifices only certain priests were entitled to make, we can imagine the ancient Athenians thinking such legislation as quite appropriate for another god.

Does anyone else see shades of political show trials in modern times? We can well imagine the atmosphere of fear, of informers, — and perhaps we need to pinch ourselves to realize that this was a demonstration of what the reality of the laws of Exodus, Leviticus and Deuteronomy would have meant.

Plato, however, after witnessing the execution of his teacher Socrates in this religious-political atmosphere, wrote what he considered would be a fairer refinement (or more just application) of such laws. We will look at his description of more “ideal legislation” and its similarities with the Pentateuch in another post. 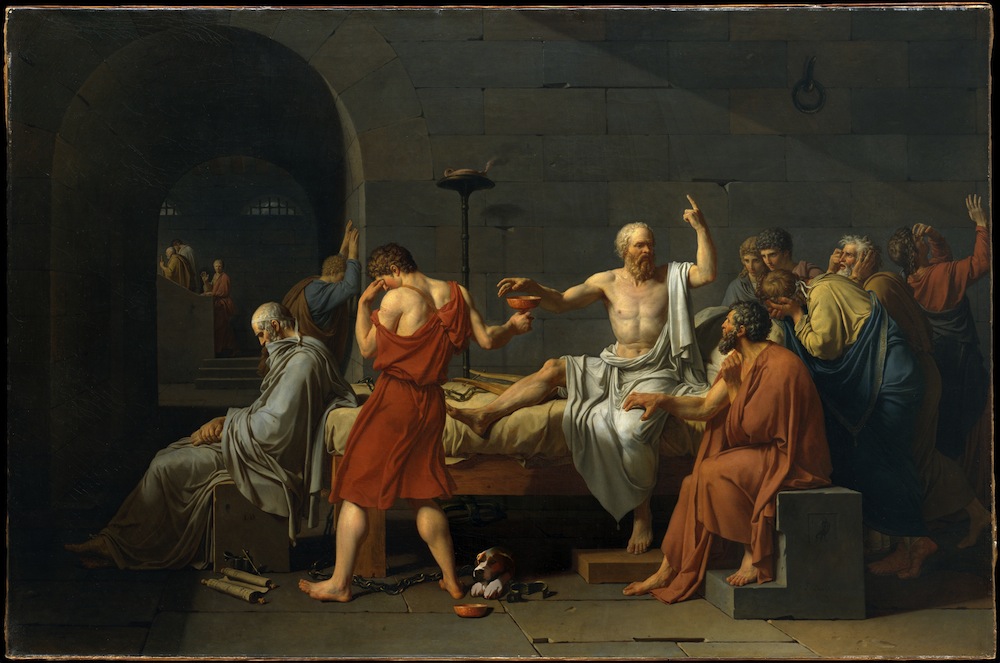 Socrates is a most interesting character in this context because since ancient times he has also been seen as parallel to Jesus. The irony is that if he is an exemplar of the noble death, that death was imposed by a law and process that foreshadowed the law of Moses.

The charges brought against Socrates, according to Plato:

Socrates … commits an offense by corrupting the young and by not acknowledging the gods whom the city acknowledges, but rather other,
novel divinities [daimonia]. (Apology, 24 b-c)

Exactly how Socrates is thought to “corrupt the young” is further explained:

Socrates: But tell us . . . how do you claim that I corrupt the young, Meletus? Or is it obvious that, according to the indictment . . . that you filed . . . , I do so by teaching them not to acknowledge the gods whom the city acknowledges, but instead other, novel divinities? Isn’t that what you say I corrupt them by teaching?

Socrates elaborates on what this “novel divinity” of his is. Not unlike Jesus, Socrates explains that his teaching about this new god is well known:

[Y]ou have often and in many places heard me talking about; namely, that something godly and divine [daimonion] comes to me: this is the very thing that Meletus mocks in the indictment … that he filed …. I have had this since I was a boy: a voice comes to me, and when it does, it always dissuades me from what I am about to do; it never encourages me. (Apology, 31 c-d)

In another scene that will recall more exchanges in the New Testament Xenophon, in his Apology of Socrates, gives his account. Socrates is speaking:

“One thing I marvel at in Meletus, gentlemen, is the basis of his assertion that I do not believe in the gods worshipped by the city, for all have seen me sacrificing at the communal festivals and on the public altars if they happened to be present, including Meletus himself if he so desired. As for introducing ‘new divinities,’ how could I be guilty of that merely in asserting that a god’s voice is made manifest to me indicating what I should do? Surely those who take their omens from the cries of birds and the utterances of humans from their judgments on ‘voices.’ Will any one dispute either that thunder utters its ‘voice’ or that it is an omen of the greatest moment? Dos not the very priestess who sites on the tripod at Pytho divulge the god’s will through a ‘voice’? But more than that, in regard to the god’s foreknowledge of the future and his forewarning of it to whomever he wishes, these are the same terms, I assert, that all people use and credit. The only difference between them and me is that whereas they call the sources of their forewarning ‘birds,’ ‘utterances,’ ‘chance meetings,’ ‘prophets,’ I call mine a ‘divine’ thing. . . . That I do not lie against the god I have this further proof: I have revealed to many of my friends the counsels which the god has given me, and in no instance has the event shown that I was mistaken.”

Xenophon describes what happened next:

the jurors raised a clamor at hearing this, some of them disbelieving his statements, others jealous at his receiving greater favors even from the gods than they themselves. . . . (Apology 11-13)

If your very own brother, or your son or daughter, or the wife you love, or your closest friend secretly entices you, saying, “Let us go and worship other gods” (gods that neither you nor your ancestors have known, gods of the peoples around you, whether near or far, from one end of the land to the other), do not yield to them or listen to them. Show them no pity. Do not spare them or shield them. You must certainly put them to death.

Plato’s revision of the law

Next in this series we will see how Plato chose to express the intent of the law that condemned Socrates and how remarkably similar is his presentation to what we read in the Pentateuch.

With the exception of the Xenophon quotation (which comes from Loeb), the details and quotations relating to the ancient trials for impiety all come from

Phillips is one of several sources cited in

5 thoughts on “Socrates as Anti-Hero according to Biblical Law”