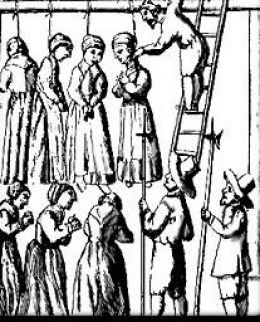 I just read an interesting article, How Medieval Churches Used Witch Hunts to Gain More Followers, by Becky Little discussing another article by two economists arguing that “the Catholic and Protestant churches promoted themselves by persecuting witches.”

The original article, Witch Trials, is by Peter Leeson and Jacob Russ and is available as a pdf download. Their abstract:

We argue that the great age of European witch trials reflected non-price competition between the Catholic and Protestant churches for religious market share in confessionally contested parts of Christendom. Analyses of new data covering more than 43,000 people tried for witchcraft across 21 European countries over a period of five-and-a-half centuries, and more than 400 early modern European Catholic-Protestant conflicts, support our theory. More intense religious-market contestation led to more intense witch-trial activity. And, compared to religious-market contestation, the factors that existing hypotheses claim were important for witch-trial activity — weather, income, and state capacity — were not.<

No doubt historians will debate the economic interpretation, but it looks like one more perspective to consider. I have not yet read the original article since I will need to set aside some decent time for it given the detailed datasets attached to it that would need to be analysed.

One interesting point at a glance is that the Catholic nations appear to be significantly “less guilty” than the Protestant ones.