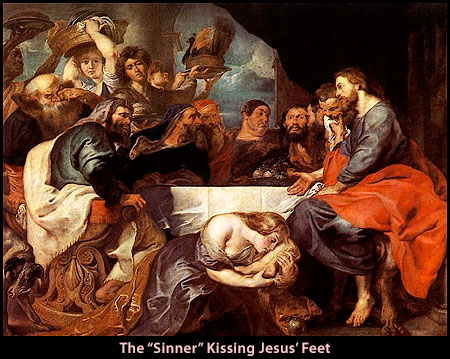 The first two gospels portray Jesus being anointed by an unnamed woman in Bethany in order to “prepare him for burial.” In the third gospel that scene has been removed and replaced with another, set earlier, of an unnamed woman anointing Jesus’ feet.

How do we know the Gospel of Luke was rewriting the Bethany anointing scene and not adding a totally different episode? The answer lies in the clues the third evangelist left us. Both scenes share the following:

And then there are the syzygies, the paired opposites:

We have enough DNA to identify Luke’s story as derivative of the one found in Mark and Matthew. (Thomas Brodie further identified 2 Kings 4:1-37 as an additional source.) Clearly the author of the third gospel did not believe he was reading a “historical memory” in the earlier gospel(s) or that he was composing a version of history. The author recognized the earlier narrative as composition with a certain message that could be erased and rewritten in the interests of preaching another message deemed more appropriate.

So what was the alternative message? Why was the theme of the first account “repealed and replaced”? END_OF_DOCUMENT_TOKEN_TO_BE_REPLACED

Have we, after all, been making too much of Galatians 4:4? That’s the question I keep asking myself. After much reflection, I believe yes, we have, but perhaps not for the reason you would expect.

In Daniel Gullotta’s “On Richard Carrier’s Doubts,” he writes:

Furthermore, while Paul does use the word γενόμενον [genómenon] (to be made/to become)  [see: γίνομαι (ginomai)] instead of the typical γεννάω [gennáō] (to be born), γενόμενον does appear in relation to human births in other pieces of ancient literature, such as Plato’s Republic and Josephus’ Antiquities [of the Jews].61 It is also noteworthy that the similarly worded phrase ‘born of a woman’ is also found within the Book of Job, the Dead Sea Scrolls, the Gospel of Matthew, and the Gospel of Thomas, as well as in other early Christian texts, each time indicating a human birth.62 With this convention in mind then, Paul’s expression, ‘born of a woman’, is fitting and certainly not exceptional. Thus, when Paul writes of Jesus’ coming into the world (Gal 4.4-6; cf. Phil 2.5-8; 2 Cor 8.9; Rom 8.3-4), it is apparent that it should be taken at face value to indicate Jesus being born like any other ordinary Jewish human being, that is, ‘born of a woman, born under the law.’ (Gullotta 2016, p. 329)

I have preserved Gullotta’s footnotes above, because we’re going to take a look at all of his references to see if his assertions hold up. We’ll see whether the phrase “born of a woman” is (1) fitting and (2) certainly not exceptional. Ultimately, we’ll try to determine the function of the phrase in its context in Galatians.

Before we examine the citations in ancient literature, I must praise Gullotta for scouring the thousands of occurrences of genómenon to find three instances in which the word appears (he claims) “in relation to human births.” Let’s begin.  END_OF_DOCUMENT_TOKEN_TO_BE_REPLACED