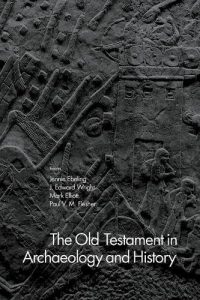 This series of posts has been following the most recent publication on the archaeology and history of the Old Testament — The Old Testament in Archaeology and History (OTAH) — and has now reached the point of the earliest historical evidence for the presence of Israel and her God Yahweh in Canaan.

In 1896 W. M. Flinders Petrie, excavating a temple in Luxor, Egypt, discovered an inscription on stone that said “Israel is wasted, its seed is not.” The inscription or stele belonged to Pharaoh Merneptah and was dated 1207 BCE. That’s roughly 207 years before the time of David and Solomon. There is no biblical account of Egyptian forces destroying Israel according to the claims of the Merneptah stele. For context, here is the relevant section of that inscription. It is describing an Egyptian military campaign into Canaan.

The (foreign) chieftains lie prostrate, saying “Peace.” Not one lifts his head among the Nine Bows.
Libya is captured, while Hatti is pacified.
Canaan is plundered, Ashkelon is carried off, and Gezer is captured. Yenoam is made into non-existence; Israel is wasted, its seed is not; and Hurru is become a widow because of Egypt.
All lands united themselves in peace. Those who went about are subdued by the king of Upper and Lower Egypt… Merneptah. (COS 2:41) (OTAH, p. 256)

At this point the chapter in OTAH is disappointingly lacking in citations for readers to follow up. It makes the following points:

(It’s that word “argue” that confuses me. What are the arguments? That’s why I’d like to see some of the secondary source material identified so I could follow up the “arguments”. Or are they really only speculating that the Pharaoh at this time brought the Israelites as captives back to Egypt with him? Perhaps I will find the arguments in sources cited in other contexts in the chapter as opportunity might arise for me to dig deeper.)

That is far from being anything like a “historical reconstruction” of the biblical story in my view. But let’s continue with the chapter.

Around this time the reader is informed that “there was a dramatic population increase in the central highlands of Canaan at the end of the Late Bronze Age and the beginning of the Iron Age”. That’s around 1250 to 1050 BCE according to the timeline on page xvii of OTAH.

It is possible—some scholars would say highly likely—that these new settlers were the people Israel, or at least a “proto-Israel” (see the next chapter). Despite this, the common material culture of these sites—plastered cisterns, terracing, olive orchards, collar-rim jars, cooking pots, four-room houses, storage facilities like silos, and unfortified settlements—has few links to Egypt. The most common house form in these sites is known as the “four-room house,” and it is distinctive to them. (OTAH, p. 257)

A paragraph discusses the maverick claims of one scholar, Manfred Bietak, who “argues, however, that there is evidence for the four-room house in Egypt” after all. (Bietak’s chapter is found in Israel’s exodus in transdisciplinary perspective : text, archaeology, culture, and geoscience, a work that is not readily available to me.)

Where does Yahweh come from?

We return to those nomadic people known as Shasu. Egyptian records place them in the region of Edom (including Seir, the mountainous region of Edom) and the Negev. Those same Egyptian records also portray them as undesirables, “robbers and brigands”. Sometimes the Egyptians allowed the Shasu into their delta regions to water their cattle; other times we read of conflicts with the Shasu throughout Canaan, and even at one point of being spies for the Hittite enemy of Egypt.

But the most important point about the Shasu lies in their worship. A papyrus list from the time of Ramesses II mentions “the land of the Shasu of Yhw” — a clear reference to “the name of the Israelite god ‘Yahweh’ ” (Redford 1992, 273). This is our earliest evidence of the worship of Yahweh, and it is important to note that it is established outside of Canaan. (OTAH, p. 258, my bolding)

Wright, Elliott and Flesher, the authors of the OTAH chapter “Israel In and Out of Egypt”, acknowledge that “some scholars have wondered whether the “Israel” mentioned in the Merneptah Stele should be associated with the Shasu depicted in the reliefs of Merneptah”. No doubt readers will have their own evaluations of such “wonderment”.

But what is interesting is that the Biblical literature itself does associate the origins of Yahweh with Edom and Seir.

Now this is the blessing with which Moses the man of God blessed the children of Israel before his death. 2 And he said:

“The Lord came from Sinai,
And dawned on them from Seir”

Lord, when You went out from Seir,
When You marched from the field of Edom

God came from Teman [Teman = South, a designation of Edom],
The Holy One from Mount Paran.

William Dever in his book Did God Have a Wife? Archaeology and Folk Religion in Ancient Israel at one point places Teman even further south in Yemen. I have copied here a map from Dever’s book to show the location of Kuntillet Ajrud, an archaeological site in the northern Sinai where inscriptions of Yahweh — and his wife Asherah! — have been studied. 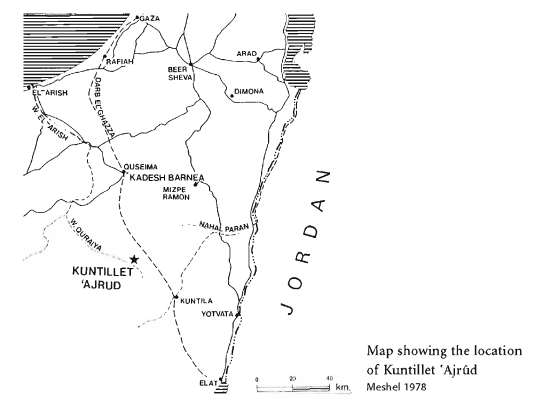 Dever references several inscriptions of Yahweh but we are discussing the chapter in OTAH:

Yahweh’s links to Teman also appear at Kuntillet Ajrud in northern Sinai. A ninth-century BCE inscription found there further emphasizes Yahweh’s southern character: it reads, “I bless you by Yahweh of Teman and by his Asherah” (Knauf and Guillaume 2015).

So the evidence is tantalizing yet elusive for anyone seeking for signs of some historicity behind the Biblical story of Israel’s exodus and settlement in Canaan.

The authors of our chapter conclude that there is no evidence for Israel emerging from Egypt as a people of Yahweh. Further, the evidence tells us that Yahweh was not a Canaanite god and we have no idea how the Edomite deity came to be the god of Israel. The best that the authors can suggest is that since the people of Israel emerged out of several Canaanite groups then perhaps at some point the Shasu migrated north and introduced their god to the peoples in the central Canaanite highlands.

13 thoughts on “Exodus, part 3. Israel and Yahweh in Canaan”