When did the Exodus happen?

And it came to pass in the four hundred and eightieth year after the children of Israel had come out of the land of Egypt, in the fourth year of Solomon’s reign over Israel . . .

When did the Israelites enter Egypt?

Then He said to Abram: “Know certainly that your descendants will be strangers in a land that is not theirs, and will serve them, and they will afflict them four hundred years.

Now the sojourn of the children of Israel who lived in Egypt was four hundred and thirty years.

Linking the Hyksos to the Israelites in Egypt

Hyksos is an Egyptian word meaning “foreign rulers”. The “Hyksos” entered Egypt along with Semitic groups from Canaan and even managed to rule northern Egypt from around 1670 to 1550 BCE. Their capital was Avaris in the Nile Delta.

One of the Hyksos kings was Y’qb-HR, or Jacob Har. Sounds familiar.

Josephus tells us that the third century BCE Egyptian “historian” Manetho referred to these foreign rulers in Egypt as shepherds. Josephus further identifies these Hyksos as the Israelites and cites the rule of Joseph over Egypt as support for this, and equates the eventual expulsion of the Hyksos with the Exodus of the Israelites.

How some scholars interpreted the above data

Some biblical scholars followed Josephus’ conjectures and argued that if this hypothesis is correct, it provides evidence of the “biblical version of the Hebrews sojourn in Egypt” (Orlinsky 1972, 52). In this view, when the native Egyptians overthrew the hated Hyksos and chased them out of Egypt, the Israelites lost their protectors and became enslaved, along with the remaining Semites in Egypt. Earlier biblical scholars had understood this situation as parallel to the biblical record: “Now a new king arose over Egypt, who did not know Joseph. . . . Therefore they set taskmasters over them to oppress them with forced labor” (Exod 1:8,11). (Wright, J. Edward, Mark Elliott and Paul V.M. Flesher, “Israel In and Out of Egypt,” in The Old Testament in Archaeology and History, edited by Jennie Ebeling, J. Edward Wright, Mark Elliott and Paul V.M. Flesher, p. 248. Waco: Baylor University Press, 2017)

Those scholars placed the Exodus, then, in the fifteenth century BCE (the 1400s BCE) just as the good book in 1 Kings 6:1 said.

The evidence for a Hyksos link to Israel’s Exodus

None. Neither archaeological nor biblical.

The evidence against a Hyksos link

Therefore they set taskmasters over them to afflict them with their burdens. And they built for Pharaoh supply cities, Pithom and Raamses.

The building projects refer to the time of Pharaoh Rameses II who reigned from 1279 to 1213 BCE.

We don’t need to assume the reliability of that biblical claim but what we do have to accept is that its authors placed the Exodus event centuries after the time of the Hyksos. The same Rameses date is also centuries later than the date indicated by I Kings 6:1.

In the fifteenth century BCE Egypt was ruled by Pharaohs who are renowned for their extraordinary power: Thutmose III (1479-1425 BCE) and Amenhotep II (1427-1400 BCE) of the great Eighteenth Dynasty. These rulers repeatedly invaded Canaan.

There is no evidence that either lost control of Canaan to a massive Israelite invasion. Indeed, the book of Joshuas stories of the conquest of Canaan never even presents the Egyptians as opponents in battle. (Wright, Israel, 249) 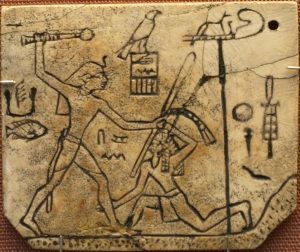 As early as Dynasty I the pharaoh had to defend Egypt’s borders and commercial interests in Sinai from troublesome Bedouin. An ivory label of King Den [see image on right] reads, “the first occasion of smiting Easterners.”  From throughout the Old Kingdom reliefs have survived depicting pharaoh smiting Egypt’s enemies, and not a few of these have come from the Sinai. (Hoffmeier, James K. Israel in Egypt: The Evidence for the Authenticity of the Exodus Tradition, p. 54. New York: Oxford University Press, 1996.

“Asiatic” nomads (from Canaan and Syria) were always entering Egypt according to what we can read today from Egyptian scribes of the third and second millennium:

91. Now speaking about these foreigners, as for the miserable Asiatic, wretched is the place where he is;
92. Lacking in water, hidden because of trees. Many and difficult are the paths therein because of mountains. He has not settled in one place.
93. Food causes his feet to roam about. He fights since the time of Horus. He does not conquer nor is he conquered.
94. He does not declare war, (but) is like a thief darting about in a group.

99. Dig a canal to its … Flood its half to the Bitter Lakes. Look, it is a navel cord for the foreigners.
100. Its walls are warlike, its army numerous. The farmers in it know how to take up arms.

Hunger, drought, are said to push these Asiatics to go down into Egypt. The Egyptian pharaoh is said to have built a defensive canal and armed the local farmers to keep them out.

He (Neferti) was concerned for what would happen in the land.
He thinks about the condition of the east.
Asiatics … travel with their swords,
terrorizing those who are harvesting,
seizing the oxen from the plow. . . .

All happiness has gone away, the land is cast down in trouble
because of those feeders, Asiatics … who are throughout the land.
Enemies have arisen in the east, Asiatics have come down to Egypt. . . .

One [= a pharaoh to come] will build the “Walls of the Ruler,” life prosperity and health,
to prevent Asiatics from going down into Egypt.
They beg for water in the customary manner
in order to let their flocks drink.

Drought (or need for water) drives the Semites (one of the words used for Asiatics) into Egypt. Fortifications are necessary to keep as many of them as possible out.

The Tale of Sinuhe

I reached the “Walls of the Ruler”
which were made to repulse the Asiatics,
to trample the Bedouin.

This papyrus lists the names of servants on an Egyptian estate: over 40 have Semitic names. That would indicate Semites were very populous in the Delta and northern region of Egypt. They are thought to have been descendants of earlier migrations, prisoners of war, slaves, traders and diplomatic tributes.

Egyptian records show that though many arrived as slaves or mercenaries, others worked as

Archaeological evidence for Semites in Egypt

The domestic and religious architecture, burial traditions, ceramics, and bronzes all show strong connections to the Levant, although there was an increased Egyptianization of the pottery as time went on. Concerning the earliest Asiatic settlement, . . . Bietak concludes, “Donkey sacrifices in connection with tombs, and bronzes from the tombs reveal, however, in combination with the house-types that the inhabitants of this settlement were Canaanites, however, highly Egyptianized.” (Hoffmeier, Israel in Egypt. p. 64)

Of the seventy-one sites identified, twenty-one yielded Middle Bronze II, Levantine materials that correspond to the Second Intermediate through Hyksos Periods. Most sites are regarded as campsites or villages that were seasonally occupied by transhumants. . . .  (ibid, p. 65) 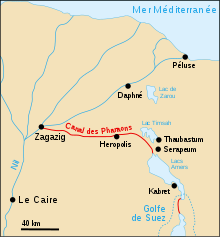 Excavations at Maskhuta from the late 1970s and early 1980s uncovered Middle Bronze, Canaanite remains. . . . The second phase witnessed more signs of permanence, such as mud-brick tombs with donkey burials and ceramics suggestive of the late Middle Bronze IIA and into IIB. . . . The people of this second phase have been labeled “Egyptian based’Asiatics.'” (ibid, p. 66)

Flinders Petrie had 1905 at Tell er-Retaba . . . exposed a fortress from the New Kingdom. Ramses II had built a temple there for the cult of “Atum as Lord of Tjeku”. A stele and statue show him with Atum. . . . During the time of the New Kingdom, the area was, among other things by the Shasu … used:

“The Shasu tribes of Edom (šʒśw n jdwm) passed through the fort of Merenptah in Tjeku to graze their cattle by the ponds of the Atum temple. I took her from Seth (3rd Heriu-renpet) on the day of her birthday to the place where the other Shasu tribes, who passed the fort of Merenptah in Tjeku days ago, have already arrived. Report of an Egyptian border official.” [Machine translation of Wikipedia article]

The sloped glacis on the outer edge of the tell, a common feature of Middle Bronze II sites from Syria through Canaan, led G. R. H. Wright . . . [to postulate] that the plastered glacis, otherwise unattested in Egypt, was a technique employed to protect a tell against weathering and erosion. If Wright is correct, then the presence of the glacis at this Delta site further ties it to the Middle Bronze Canaanite culture. About a kilometer east of the tell is the Second Intermediate Period cemetery. . . . The ceramic remains are of Palestinian type . . . (Hoffmeier, p. 67)

The famous Beni Hassan scene and accompanying inscriptions report a caravan of 37 “Semites” (metalworkers and traders) visiting the governor in Egypt . . . 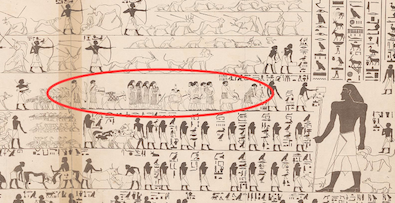 We read of Apiru moving a stone at Pi-Rameses. Apiru appear frequently in the Amarna letters and other Egyptian sources as raiders and bandits in Canaan.

One Aper-el, a man with a clearly Semitic name (recall that “El” is the word for “god” in Semitic languages), attained the posi- tion of vizier, the most powerful position in the Egyptian royal court. Aper-el served during the Eighteenth Dynasty (1390-1336 BCE) under Amenhotep III and Akhenaten (Redmount 1998,102).

Much later, a Semite (perhaps Syrian?) named Bay was influential in placing an Egyptian on the throne during the late Nineteenth Dynasty (1295-1186 BCE). (Wright, Israel, p. 250 — my formatting and bolding)

Hoffmeier, James K. Israel in Egypt: The Evidence for the Authenticity of the Exodus Tradition, New York: Oxford University Press, 1996.