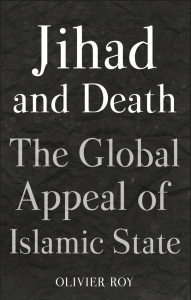 This post is a continuation from Jihad and Death, the global appeal of Islamic State.

Far from being religious zealots, a large number of those involved in terrorism do not practise their faith regularly. Many lack religious literacy and could actually be regarded as religious novices. Very few have been brought up in strongly religious households, and there is a higher than average proportion of converts. Some are involved in drug-taking, drinking alcohol and visiting prostitutes. MI5 says there is evidence that a well-established religious identity actually protects against violent radicalisation. (Alan Travis, “MI5 Report Challenges Views on Terrorism in Britain,” The Guardian, 20 August 2008).

But as we have seen, jihadis do not descend into violence after poring over the sacred texts. They do not have the necessary religious culture—and, above all, care little about having one. They do not become radicals because they have misread the texts or because they have been manipulated. They are radicals because they choose to be, because only radicalism appeals to them. No matter what database is taken as a reference, the paucity of religious knowledge among jihadis is patent. (p. 42)

Yet often we read commentaries by persons who seek explanations for terrorism in the religious texts of Islam. After all, those texts are within easy reach and would appear to offer easy answers. There is a problem, however. Reading sacred texts is not analysing the minds and personalities of the terrorists themselves. Roy himself puts part of the blame for this misguided approach on “the profound secularization of both our societies and our knowledge” so that we end up having “only a textual approach to religion, disregarding what [he calls] religiosity.”

Theology basically involves interpreting scriptures in a comprehensive discursive system that isolates dogma from all the rest: emotion, imagination, aesthetics, and so on. But what is at work here is precisely religiosity — in other words, the way in which the believer experiences religion and appropriates elements of theology, practices, imaginaries, and rites, to construct a transcendency for himself — and not religion. In the case of the jihadi, this construction places him in contempt of life: his own and that of others. (pp. 42-43, my bolding in all quotations)

The jihadi is infused less with “the methodological tradition of exegesis of the Prophets” than with visions of heroism and violence. The theology provides a veneer of “proof-texting” (my term, not Roy’s) rationalization for those visions. Such verses become incantations, or a Christian fundamentalist’s “proof-texts” or ideological slogans.

When young jihadis speak of “truth,” it is never in reference to discursive knowledge. They are referring to their own certainty, sometimes supported by an incantatory reference to the shuyukh, the sheikhs, whom they have never read. In them they thus find whatever they put there themselves. The linkage between their imaginary and science is brought about by two things: terminology (peppering ones French or English with Arabic words) and the brutal, non-discursive affirmation of a verse or a hadith, made up of one or two sentences at most, such as the famous verse: “Do not take the Jews and the Christians as allies. They are allies of one another.” Short texts such as these are thrown up in peoples faces (just as the Red Guards threw Mao quotes in each others faces), without ever referring to other texts, let alone seeking a more overall logical significance. . . . . Radicals talk less about religion than Salafis do: their posts and their texts revolve more around action than religion. The circulation of religious texts is secondary with al-Qaeda, central in ISIS propaganda, incantatory among radicals. Their reading material is found mostly on the internet: al-Awlaki is very popular because he speaks English. (pp. 43-44)

The “imaginary” that Olivier Roy believes to be the true interest of the jihadi terrorist is primarily that of “the avenging hero of the suffering Muslim community”. On what does he base this view? On what the terrorists themselves say. The same themes recur with them but Roy takes the words of the leader of the group responsible for the July 2005 London bombings, Mohammed Siddique Khan, as representative of their motivations:

1. Khan begins by citing the atrocities of the Western nations against the “Muslim people” (in the transcript he says, “my people all over the world”);

2. next, Kahn announces himself as fulfilling the role of the avenging hero (“I am directly responsible for protecting and avenging my Muslim brothers and sisters,” “Now you too will taste the reality of this situation”);

3. finally, he announces his love of death (“We love death as much as you love life”), and his confidence of entering heaven (“May Allah … raise me amongst those whom I love like the prophets, the messengers, the martyrs,” etc.).

The same vengeance motivation was dramatized by ISIS executioners when they made their victims suffer the same way as Muslims (e.g. wearing Guantanamo dress, being burned alive or blown up).

But only rarely is the particular Muslim community they claim to be avenging actually specified. Recall “my people all over the world” in #1 above. The enemy is usually labelled “crusaders”. As Roy observes,

[The suffering Muslim community being avenged] is a non-historical and non-spatial reality. When they rail against French policy in the Middle East, jihadis use the term “crusaders.” They don’t refer to French paratroopers during the battle of Algiers. The Bangladeshi jihadis did the same when slaughtering Westerners (especially Italians) in Dhaka on 1 July 2016: they boasted of having killed twenty-two “crusaders,” whereas of course there was no colonial dispute between former Bengal and Italy. (p. 45)

I think that observation is interesting. It is one I will be alert to in the future. If it is valid, then Roy’s next sentence is also surely valid:

Each specific conflict is a metaphor for an age-old conflict that will end only in a final battle.

Palestine, Chechnya, China, Bosnia, and Iraq are mentioned at random. Photos of atrocities come from all theaters of operation, they are rarely dated, can be interchanged, and sometimes have nothing to do with their caption (for instance, a photo of a massacre of harkis—Algerian soldiers loyal to the French—in Algeria committed by the FLN but attributed to the French). The internet is teeming with video clips (such as the many versions of “Wake Up Ummah”) that offer a good picture of this “panoramic” vision of a global, suffering ummah.

Olivier Roy then zeroes in on that aspect of terror groups that makes them a distinctly generational or youth movement fighting a fundamentalist cause against their elders. Roy also puts his finger on something that I think is different from the terrorist groups of only a few decades ago, their disinterest in being part of a historical struggle for national liberation:

Radicals never refer explicitly to the colonial period. They reject or disregard all political and religious movements that have come before them. They do not align themselves with the struggles of their fathers, precisely because they believe their fathers have lapsed and that, basically, they are the only generation equal to that of the Prophet’s time. As mentioned previously, almost none of them go back to their parents’ countries of origin to wage jihad, which would be the case if there had been a colonial genealogy. For converts, this “virtual” relationship to the entire Muslim community is obvious. They are interested in global Islam, not a specific conflict. It is noteworthy that none of the jihadis, whether born Muslim or converted, has to my knowledge campaigned as part of a pro-Palestinian movement or belonged to any sort of association to combat Islamophobia, or even in an Islamic NGO. They are not the product of disappointed militancy (which was frequently the case for the leftists of 1968, often former French Communist Party members campaigning against the Algerian War). These radicalized youths read no more than texts in French or English circulating over the internet, for instance al-Awlaki’s “44 Ways of Supporting Jihad,” . . . .  Al-Awlaki talks about the “Romans” fighting the “Muslims,” . . . . Never is there any historical contextualization. The constant reference to the time of the Prophet precisely makes it possible to reject history by claiming to start from scratch (that is something shared by most “fundamentalists”: the pretence of going back to basics allows them not to draw lessons from history).

The Islamist terrorist gangs and individuals do not go to Palestine or Gaza to help with the Palestinian struggle against Israel. In their online speeches they often pay lip service to supporting the Palestinian struggle but that’s not where their efforts are directed. They go to Syria “to save Muslims” but end up killing other Muslims. They also fight the longstanding movements opposed to Israel, “Hamas in the Yarmouk refugee camp and Hezbollah north of Damascus.” Clearly they are not picking up and continuing the anti-colonial struggles of earlier nationalist movements.

They practice a jihadic nomadism that takes them where there is jihad, but none of them seek to become integrated in the country where they are fighting. . . .

They do not refer to Syria as “Syria” but as “Sham”, the name that represents the region prior to the time when the Western powers carved up the Ottoman empire for themselves. And in the lands they enter they destroy any offensive monuments or practices associated with the local culture.

In short, they leave behind a real world for an imaginary world. Their iconoclasm also signals their indifference to any local culture.

Likewise, their enemies are generalized into an ahistorical entity. Any Muslim who does not join them in their violence is a traitor and deserves to die. Westerners are targets simply because they are Westerners and therefore supposedly responsible for their government’s actions. Targets are chosen as opportunity and resources dictate. It’s the “luck” of the draw.

An evolution can nevertheless be noted in this defensive rhetoric. As of 2015, in the magazines put out by ISIS, the mere fact of being an infidel is justification enough to be killed. The idea is no longer the defense of the ummah, but the expansion of preaching to the entire world to hasten the world’s end, which joins up with the theme of the apocalypse . . . .

Roy’s approach to the question overlaps with other studies I have read but it contains distinctive viewpoints, too. I hope to write up a few more posts hopefully to help me grasp more thoroughly what his argument is as well as being of some interest to a few readers. All the while I’ll be trying to keep in mind the difference of perspective from other studies and at the end be in a better position to understand the place of his argument within the broader field of studies into today’s terrorism.

In the next post in this series I’ll look at what Olivier Roy has to say about another core element of the terrorist’s “imaginary”, The Hero and the Aesthetics of Violence.

5 thoughts on “Jihad and Death, part 2. “The Avenging Hero of the Suffering Muslim Community””