This hurts. It becomes personal.

From my outsider perspective I understand that the Dominican Biblical Institute (DBI) was founded by Thomas Brodie (though he has an oblique way of explaining this in Beyond the Quest), so when I turn now to the DBI’s website to see what they have had to say about Brodie and the book, aspects of which I am addressing in this series of posts, and read the contents on the following images, it hurts, as it must hurt anyone who knows a significant loss that accompanies religious differences. 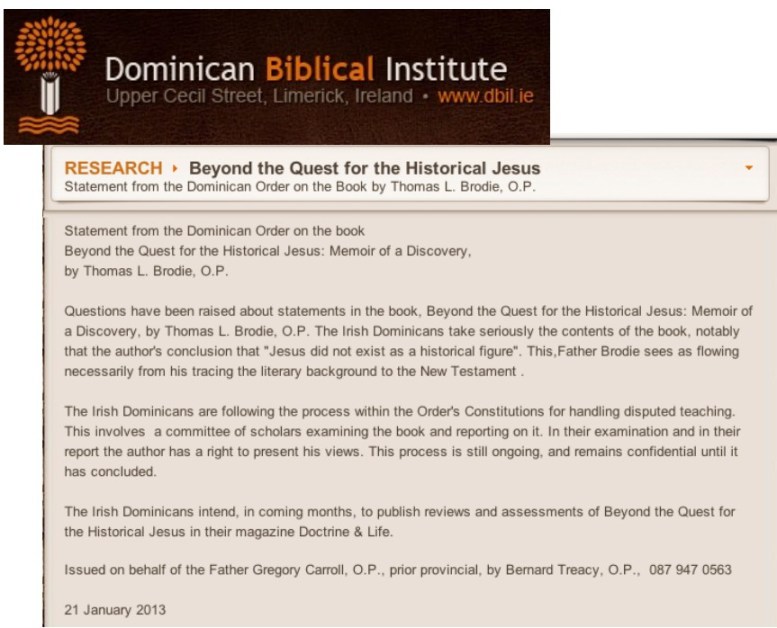 And on another DBI page we read about the change of directors:

And so we come to chapter 11 of Beyond the Quest, in which Thomas Brodie gives an overview of plans, activities, a conference and research of the DBI.

It has three aims:

I omit here Thomas Brodie’s discussion on the Lectio Divina Conference, though I am sure it was of primary interest to him personally.

During the process of research in Limerick, the historical existence of Jesus was not discussed; it was taken for granted, and left undisturbed — probably the only practical way to proceed initially. As I see it, proposing Jesus did not exist historically is like a heart transplant; you either do it fully or not at all. Instead the research had other features and dealt with other topics. (p. 106)

So literary criticism has research priority. What the the text’s sources and what is the text’s artistic structure. Not that these are the primary end-goals of research, but they do need to be addressed and understood before other questions that derive from those texts.

The methods followed and developed, Brodie points out, have been “discussed and generally approved” by the Church in three main documents:

Preliminary work has been done on “Genesis’ reshaping of the book of Jeremiah in the Jacob story”.

As for examining the re-working of Homer’s Odyssey in Genesis 11 to 50, this hoped-for study has not yet started.

The Gospels and Acts

I made the mistake too of including some examples that were weak (for instance, Chapter 52, on Judg. 21 and the Last Supper). I believe such examples are true, but they are indeed weak, and insistence on what is weak, whether by someone presenting the argument or someone opposing it, confuses the discussion. As in a courtroom, the issue is not whether some evidence is weak, but whether there is enough evidence that is strong. (p. 108)

Birthing is incomplete, Brodie says. It lacks a full discussion of the epistles. Nonetheless it goes further than any other work in providing a skeleton outline of how the NT documents were composed.

But the skeleton needs to be further tested and elaborated, and much of the work at the Limerick centre, while undertaken with an independent spirit, contributed to such testing or elaboration.

John Shelton and the centurion’s servant

One example of how testing and elaboration of Brodie’s ideas have led to revision of them came with John Shelton’s dissertation.

Brodie argued in Birthing that Luke’s account of the healing of the centurion’s servant — Luke 7:1-10 — depended upon Elijah’s saving of the widow’s children (in the LXX it is “children”, not “child”) — 1 Kings 17:1-16. John Shelton demonstrated an even stronger use of the healing of Naaman the Syrian commander (2 Kings 1-19).

So the relationship between the Gospel and Hebrew narrative was shown to be more complex than Brodie had initially thought. Moreover, it was more emphatically clear that the account in Luke did not come from Q but from the LXX.

The clarifying of the opening episode of Luke 7 (the centurion’s servant) serves in turn to bolster the already existing evidence that all three other episodes of Luke 7 — the raising of the widow’s son (7:11-17), the vindication of John the Baptist (7:18-35), and the woman’s anointing of Jesus’ feet (7:36-50) — likewise originated largely through Luke’s literary transformation of accounts from the Elijah-Elisha narrative.

Of these three, the one concerning John the Baptist is again an account that is usually attributed to the hypothetical Q. (p. 109, my formatting)

A primary result of Shelton’s work, then, has been to more strongly establish Luke’s indebtedness to the Elijah-Elisha narrative. By establishing Luke’s use of this narrative for material that has long been attributed to Q, Brodie is confident that we are entering

a line of inquiry that is more verifiable than invoking an unseen source that does not have so solid a literary foundation. Once Luke has been clarified through this more verifiable process, the way is open for a well-grounded discussion of Luke’s relationship to Matthew. (p. 109)

John’s transformation of the Synoptics

Anne O’Leary: showed Matthew’s reworking of Mark was done “in accordance with the literary practices of antiquity” (this half of her thesis was published in 2006) and that John in turn adapted sections of Matthew.

Martin Heffernan’s thesis on John 1-4 and Acts 1-8 showed Jesus journey from Jerusalem to Galilee corresponds strongly, and uniquely, to the apostolic journeys of Acts 1-8.

The literary character of the Gospel of Mark “has slowly been appreciated”. It had long been considered unliterary, even clumsy, and its sources hopelessly lost. But the view of Mark as a literary work is gaining ground now, and two scholars who have made progress here are:

Thomas Nelligan: uncovering evidence that the Gospel of Mark reflects Paul, especially in the case of 1 Corinthians where the associations are not just theological but also “precise and literary”.

This has not been investigated yet at DBI. The concept is of Septuagint-based version of Luke-Acts based on the Elijah-Elisha narrative. According to Brodie, such a document has potentially more explanatory power than Q, and promises clarification of the relationship between Matthew and Luke and provides a precedent for Mark, Matthew and John.

And it clarifies the reality behind Raymond Brown’s view (1971) that the Elijah-Elisha account is the best literary model for all four gospels. (p. 111)

Brodie has attempted to work with exponents of Q, believing a dialogue is more promising than an either-or conflict. Partly to promote such a dialogue a conference was held in 2008 devoted primarily to the role of the Elijah-Elisha narrative in the Gospels.

In 2005 another conference attempted to explore the origin and nature and place of Paul’s letters. That is, it sought to address ways the epistles

Results were published in The Intertextuality of the Epistles, edited by Brodie, MacDonald and Porter (2006). The CBQ review of this volume described it as “essays [that] herald a promising new approach”.

Brodie is especially keen on exploring in depth 1 Corinthians and its sources and final shape but this has yet to come to fruition.

Thomas Brodie comes across as far more devout than many who shudder at his “mythicist” views would expect. I have posted on this before. He appears to have had no desire to thwart the spiritual growth of Christians but to establish it on a more deeply spiritual basis. One might even say that he has shown a way forward that was called for by the Protestant Albert Schweitzer

The next section of Brodie’s Memoir is announced by the theme: Becoming aware of the need to lay some theories to rest. . . . .

4 thoughts on “Making of a Mythicist, Act 3, Scene 4 (The Dominican Biblical Institute, and Its Research)”