It’s for a younger audience, and begins:

Thanks for stopping by to take a look at Bright Simon’s Guide to Being Smarter Than God. It’s a multi-faceted project that includes a printed book, posters, stickers, and T-shirts, all designed to promote science and rational thinking. It revolves around an atheist character, Simon, who contrasts the dubious claims of beliefs with the verifiable proof of science. His motto is “Aren’t You Curious?” and his goal is to promote knowledge and secular-based virtues in a friendly way through popular culture.

Check out the details and how you can help, and see the carrots on offer at http://www.kickstarter.com/projects/tiphillman/bright-simons-guide-to-being-smarter-than-god 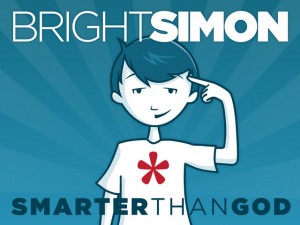 The Messiah figure (or Christ) in the Book of Enoch, specifically in the Parables or Similitudes section of that book, has several attributes and performs certain functions that make him a precursor of the Christ figure who became the focus of Christianity.

Paul’s understanding of who and what Christ was appears to have been influenced by the Book of Parables in 1 Enoch. Paul says that his gospel was revealed to him so it is easy to assume that either God revealed Christ to him in a vision or that he developed his own Christ concept to preach. However, the similarities of his Christ with the Christ/Messiah in Enoch are striking. Moreover, the same Enochic literature teaches that Christ is a figure unknown except to those to whom he is revealed from heaven. Or was he revealed to Paul, at least in part, through the Book of Enoch?

This account of at least one Jewish group’s beliefs about the Messiah before the time of Paul (and Jesus) is taken from The Messiah: A Comparative Study of the Enochic Son of Man and the Pauline Kyrios by James A. Waddell. The previous post in this series is here.

First things first. Let’s establish where in the Parables of Enoch (or Book of Parables, BP) we read the actual term “Messiah” or “Christ” — meaning “Anointed One”. The word occurs twice:

And on the day of their affliction there shall be rest on the earth,
And before them they shall fall and not rise again:

And he said unto me: ‘All these things which thou hast seen shall serve the dominion of His Anointed that he may be potent and mighty on the earth.’

We shall see through this series that this Christ, the Anointed One, is also named the Righteous One, the Chosen One, the Son of Man, and Name of the Lord of Spirits. We begin to look at some of the attributes or nature of this being in this post, and then we will (courtesy of Waddell) study the functions, the role, of this Messiah.

The Messiah in the Book of Enoch is a human being. It is the man Enoch himself who is (near the end of the book) declared to the Messiah himself. Enoch is the sixth human generation after Adam, or the seventh, counting inclusively. The human nature of Enoch is driven home in the following:

the garden where the elect and righteous dwell, where my grandfather was taken up, the seventh from Adam, the first man whom the Lord of Spirits created.

So Enoch, we are emphatically assured, belongs to the human race. He is a descendant of Adam.

Then at the end of the BP this same human Enoch is explicitly identified with the Son of Man: END_OF_DOCUMENT_TOKEN_TO_BE_REPLACED