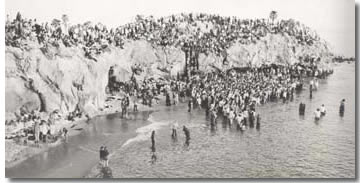 Rivka Nir’s article also suggests her own answer to the old question of the origins of the idea of baptism as we read it in connection with John the Baptist.

To begin, let’s refresh our memory of what we read about John the Baptist in Josephus. The translation following is as it appears in Rivka Nir’s article:

(116) But to some of the Jews the destruction of Herod’s army seemed to be divine vengeance, and certainly a just vengeance, for his treatment of John, surnamed the Baptist.

(117) For Herod had put him to death, though he was a good man and had exhorted the Jews who lead [ἐπασκοῦσιν] righteous lives and practice [χρωμένοις] justice [δικαιοσύνῃ] towards their fellows and piety [εὐσεβείᾳ] toward God to join in baptism [be united by baptism] [βαπτισμῷ συνιέναι].

In his view this was a necessary preliminary if baptism [βάπτισιν] was to be acceptable to God. They must not employ it to gain pardon for whatever sins they committed, but as a consecration of the body implying [or: on condition] that the soul was already thoroughly cleansed by [righteousness—R.N.] [δικαιοσύνῃ].

(118) When others too joined the crowds about him, because they were aroused [ἤρθησαν] to the highest degree by his sermons, Herod became alarmed. Eloquence that had so great an effect on mankind might lead to some form of sedition, for it looked as if they would be guided by John in everything that they did. Herod decided therefore that it would be much better to strike first and be rid of him before his work led to an uprising, than to wait for an upheaval, get involved in a difficult situation, and see his mistake. (Antiquities 18.5.2 116-119)

Rivka Nir first gives us the three pillars upon which the authenticity of this passage rests (I omit supporting details in the footnotes and add bold format):

Early suspicions of a brazen forgery