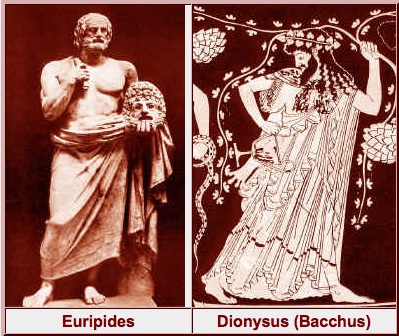 “Jesus and Dionysus in The Acts of the Apostles and early Christianity” by classicist John Moles was published in Hermathena No. 180 (Summer 2006), pp. 65-104. In the two years prior to its publication the same work had been delivered orally by John Moles at Newcastle, Durham, Dublin, Tallahassee, Princeton, Columbia, Charlottesville and Yale.

John Moles begins his article with two questions. The first of these is a dual one:

Is Acts influenced by Dionysiac myth or ritual and does it quote the play Bacchae?

Old questions, yes, but they are still being raised in the literature, as Moles indicates with the following list:

The second question is the one that is the main point of the article and the one given the most space in answering:

If the answers to the above are affirmative, what are the consequences?

I have it on authority that John Moles is not a mythicist so those who read this blog with a jaundiced eye can look elsewhere for material that serves their agenda.

Though some of these parallels need justification, as Moles points out, it is clear that the two texts “share numerous important themes”. The possibility that the Bacchae influenced Acts is thus not implausible.