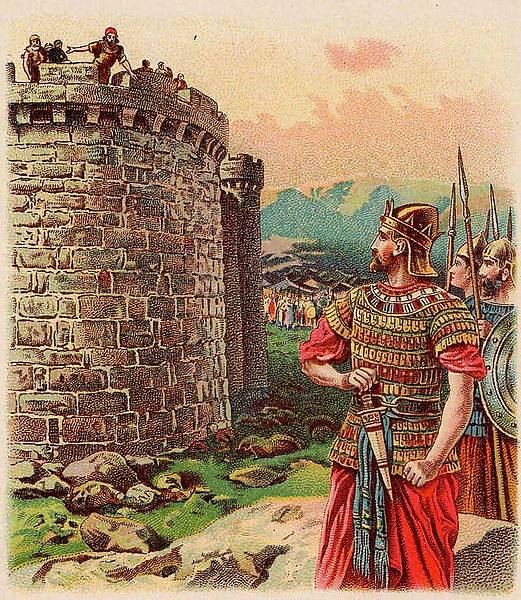 To briefly summarize these:

Firstly, who are “his men”? This is the first mystery. Presumably it was David’s own professional elite force, so many speculate. But it is an anomalous expression in the larger narrative. (This does not suggest an archival reference.)

Who are the Jebusites? Their mention informs the reader that this city belongs at this point to neither Judah in the south nor Israel of the north.

Consequently, the object of David’s campaign is understood to be an attempt to take this city as his own personal property . . . (p. 215)

But there is more. Many scholars would stress at this point the geographic location of Jerusalem, strategically located between Judah and Israel and thus eminently suitable as a capital of the two entities. But this rationale assumes that there was a historical Kingdom of Judah there to begin with. Van Seters insists that the archaeological evidence does not allow for this at all:

This scenario, which is widely followed, builds an elaborate hypothesis on very little evidence. The notion that there was a clearly delineated Kingdom of Judah in the south and a Kingdom of Israel in the north, in the time of David, is an anachronism, based on texts that reflect a much later history of these kingdoms. As we have seen above, there are many archaeological reasons for questioning whether David even controlled any extensive region north of his rather small city in Jerusalem. Even the very designation of Judah as encompassing a particular people who understood themselves as Judeasn living in a particular region is quite debatable for this period. Such an understanding of identity follows a long period of political domination and shaping by a central authority. (p. 215)

So if there were no such creatures as “Judeans” at so early a period (since “Judeans” is a political term and no Judah existed yet) then who were the Jebusites?

The text tells us only that they were “inhabitants of the land”. Elsewhere this expression merely indicates the indigenous inhabitants of Canaan. Van Seters does not accept that the word derives from an early name for the city, namely Jebus, because Jerusalem is testified as the name of this city as early as Egypt’s Amarna age.

What is more likely is that [the author] merely meant to signify a non-Israelite enclave because David can hardly be presented as making war against his own people.

Thus, in actual fact we can say virtually nothing about the circumstances of how David came into possession of Jerusalem, or even if he actually did so. (p. 215)

(It would appear that the author is deliberately signifying a “pagan” occupation even after the rest of Palestine has supposedly been conquered in order to allow David the reputation of capturing a “virgin” city for his own.)

So how was the city captured?

This is the most confusing element of the story. If the text means that the Jebusites are mocking David by boasting that their defences are so impregnable that they have confidently set blind and lame guards on the walls, but that David cunningly found a way in to the city simply by entering a shaft that led to the city’s water supply and so climb up into the city.

If this is what the text means, then the account has no plausibility and is the figment of someone’s imagination. No fortified city under enemy attack would defend itself in this way, and anyone who had access to the water shaft would already be inside the defensive perimeter of the city. The mouth of the water shaft would be the most defensible point of access into the city. (pp. 215-216)

(No plausible account is given for how David captured such a “stronghold”.)

“The blind and the lame”

This curious phrase of the Jebusites is given an obscure etiological connection to a common saying, “The blind and the lame shall not come into the house” — a reference to some future practice. (p. 216)

But in this saying (v. 8) “the blind and lame” clearly refers to people generally and not only to the Jebusites. The house is clearly a reference to the Temple.

This means that a common prohibition having to do with ritual impurity in the temple is given a completely fanciful and legendary etiology relating to the time of David and the beginnings of Jerusalem as a Judean city.

This hardly helps to establish any primitive context for the account.

(Was this a later addition as Van Seters thinks or could it have been original to the tale in order to invest it with an etiological significance at more than one level.)

A stronghold, the City of David

This is the only place where Jerusalem is singularly described as “a stronghold” and “City of David” — “and it hardly seems appropriate” (p. 216)

Notice that all other references to David’s being in a stronghold are in the context of his flights from Saul and his wars with the Philistines. The stronghold is the geographically hard-to-access place that offers David protection from his enemies. The exception is 2 Samuel 5:17 which is just after David has taken Jerusalem and is said to go to his stronghold on hearing the Philistines are coming to attack him. Van Seters finds this odd. If David has just taken Jerusalem why should he be said to go to “a stronghold” in response to the Philistines as if it were a different place from Jerusalem? He concludes:

(Stronghold and City of David — these descriptors are surely hefty nudges to the reader to recognize this event as the beginning of the place of Jerusalem in the remainder of the tale. Stronghold reminds me also of the David Psalms as a metaphor for where David sought refuge.)

This term is used as if it is a well-recognized structure. But Solomon is also said to have built the Millo — so unless there were two Millos we have a contradiction here. Van Seters says the term very likely refers to a large platform that is a base for a construction of a massive scale public building such as a temple or palace. One finds references to such structures in Assyrian inscriptions.

It seems to me that the remark about the Millo is just an anticipation of the later statement about David’s construction of a palace (v. 11).

This line in verse 10 in Van Seters’ view “seems to interrupt the description of David’s building activity” . . .

but it was deemed necessary to account for the fact that Hiram dispatches a delegation to him and supplies him with material to build a palace.

This undertaking is another “entirely implausible” event. Recall the very modest extent of David’s rule and the lack of any sea access to Jerusalem and the fact that David is immediately afterwards fighting a defensive war against the Philistines to the west.

(Recall the archaeological evidence does not add plausibility to the thought of Hiram sending supplies for a palace to what really was little more than a village.)

So what is the function of this tale?

From this brief examination it becomes clear that this unit is not based on some archival fragment; instead, it is a short ideological statement constructed by [the author] to account for the origin of David’s rule in Jerusalem and to connect it with subsequent themes that were important to his work. (p. 217)

That is, in my own words, it is a literary creation to bring Jerusalem into the larger story. Jerusalem is to hold a central plot function in what follows, beginning with David and the narrative of the united kingdom, so the author needed to find a way to usher it onto the stage.

David’s capture of Jerusalem from the aboriginal population of the land inaugurates the final phase of the conquest begun by Joshua. Only with this capture of the city will the ark find its resting place. The remarks about the blind and lame are very confused and have suggested that some of these are later additions. The concluding etiological explanation about handicapped persons such as these being from excluded from the holy city may reflect a later ideological modification of the account. . . . [T]he identification of the City of David with David’s stronghold in his activity against the Philistines suggests that [the author] has deliberately placed all of his struggles against the Philistines after the capture of Jerusalem. (pp. 217-218)

The ordering of the events is purely ideological

The building projects here are “obviously modeled on that of Solomon” — hence they receive “little elaboration because it will be completely superseded by Solomon’s building activity.”

There is no mention of a temple because David is to bring the ark into the city and deposit it in a tent. The thought of the temple must happen after all the wars are over.

The ordering of these events is purely ideological. David’s association with Hiram, king of Tyre, early in David’s reign anticipates Hiram’s willingness to assist Solomon in his building activities out of Hiram’s long-standing friendship with David; 1 Kgs 5:15[1]. The remarks about David’s increasing greatness and the fact that Yahweh was with him is language familiar from [the author’s] earlier treatment of David’s rise and success under Saul.