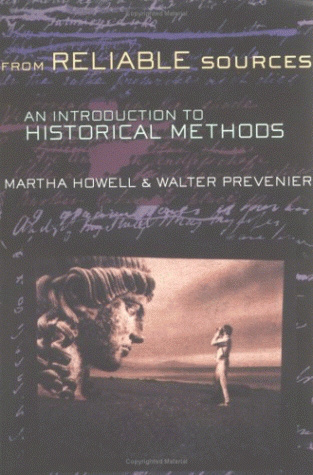 Recently a theologian kindly advised me to do a bit of background reading on how historians work (specifically to read chapter one of From Reliable Sources: An Introduction to Historical Methods by Martha Howell & Walter Prevenier) in order to come to see that historical Jesus scholars do work by the same principles that all other historians generally use.

As I recall, after the last time you claimed . . . that New Testament scholars working on historical questions use different methods than other historians, or that I had failed to adequately articulate my methods and those of the guild, I referred you to Howell and Prevenier’s From Reliable Sources. Chapter One would serve you well, and get you clued in on the basics that seem to still elude you. (Comment by Dr James McGrath)

But chapter one addresses only the nature of what is widely called “primary sources” by historians (archaeological remains and direct testimonies, including oral reports. This chapter focusses

exclusively on the type of resources that most other research guides call primary sources. (From Review by Ronald H. Fritze in The Sixteenth Century Journal XXXIII/4 (2002), p. 1248)

This is the very evidence we lack for historical Jesus studies.

But chapter two does indeed address in detail how historians should approach the written sources (in this case “secondary sources”) we do have for Jesus.

Misunderstood lesson from Chapter One

Unfortunately my theologian advisor had not read chapter two and insisted that it really was chapter one that I needed to read because, he explained, it mentioned “oral traditions”. Sorry, sir, but that chapter does not as far as I can see use the phrase “oral traditions”, though it does speak of orality as a primary source — that is, it refers to genuinely oral communication as heard by the researcher in the here and now. The chapter thus refers to “oral reports”, “oral evidence”, “oral sources”, “oral communication”, “oral acts”, “oral witnessing”.  HJ scholars do not have any evidence like this for Jesus. The early Christian evidence is all written and literary, not oral, and it is all secondary, not primary. If there had been any oral reports relaying the narratives of Christianity before the Gospels appeared they are all lost now and researchers must rely upon secondary written evidence alone. They may attempt to uncover what they believe are “oral traditions” behind that secondary written source but that is not the type of primary “oral source” that Howell and Prevenier (H&P) are discussing in chapter one. The only sources available are written and secondary.

But even here in this discussion of primary sources a critical principle is stressed: END_OF_DOCUMENT_TOKEN_TO_BE_REPLACED