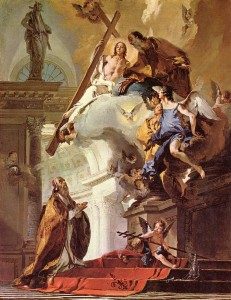 Marcion, with followers as widespread as Africa (Carthage), Gaul (Lyons) and Rome itself, hoped to reverse the mounting conflicts in the East by securing Rome’s approval of his doctrines. Rome’s Christians, like Marcion’s, had no time for Jews and celebrated “Easter”, as did Marcionites but unlike “John’s” churches in Asia, at a time other than the Jewish Passover. Both Rome’s devotees and Marcion’s fasted on the Jewish sabbath (allowing for a typo in the translated work of Couchoud) to spite the Jews. The Roman Gospel of Mark was as neo-Pauline as was Marcion’s and differed from Marcion’s only in respect to the identity of the highest God. END_OF_DOCUMENT_TOKEN_TO_BE_REPLACED

But don’t be too flighty. Be sobered by the inevitable.  http://en.wikipedia.org/wiki/List_of_dates_predicted_for_apocalyptic_events

On the other hand, think of a higher species evolving — does that mean God will have to send his son as a higher than human life form to die for their sins?

It seems obvious to most scholars that our estimate of the age of a certain book . . . must be founded on information contained in the book itself and not on other information, and the estimate should certainly not be based on the existence of a historical background that may never have existed.

The above passage is from a chapter in Did Moses Speak Attic? by Professor Niels Peter Lemche of the University of Cophenhagen. The . . . omitted words were “of the Old Testament” but I omitted them in order to suggest that the same logic applies equally to books of the New Testament, in particular the Gospels.

Although seemingly self-evident, this method is not without fault, and it may easily become an invitation to ‘tail-chasing’, to quote Philip R. Davies. By this we intend to say that the scholar may soon become entangled in a web of logically circular argumentation which is conveniently called the ‘hermeneutical circle’ . . . .

I have outlined Davies’ straightforward arguments for circularity at http://vridar.info/bibarch/arch/davies2.htm

There is another key and closely related point that is, I believe, at the heart of the dating of the Gospels.

Another points is that it is also supposed that the reading of a certain piece of literature will automatically persuade it to disclose its secrets — as if no other qualifications are needed. END_OF_DOCUMENT_TOKEN_TO_BE_REPLACED