A good friend who is a creationist recently offered me a creationist article to read (“or refute”). The article’s arguments against evolution are based on:

The article my friend gave me is Tortoises of the Galapagos by Lita Cosner and Jonathan Sarfati, apparently found in creation.com.

Here is the critical passage:

Evolution from goo to you via the zoo would require new genes encoding encyclopedic amounts of new information. But the tortoises’ adaptation to various island environments can be explained by the sorting out of already existing genes with some of these then eliminated by natural selection. . . .

The two sentences here do not logically follow one another. The authors have created a false argument against evolution by juxtaposing two sentences that in fact address different questions: by placing them together they confuse the question and lead the uninformed reader to think the authors have cleverly rebutted the foundation of evolution’s case.

The irony here is that in the same article the authors accuse evolutionists themselves of “bait and switch”, of using “sloppy language” (“confusing” adaptation with evolution) to lead to “sloppy thinking”.

The first sentence mocks the argument for evolution by condensing a number of processes that occur over hundreds of millions of years over wider geographic areas into a decontextualized summary image that sounds implausible. This is then placed against an observably and obviously true statement about the adaptation of the tortoises.

In other words, they avoid the arguments for evolution by using a falsely applied or misleading analogy.

The authors continue by explaining how one set of tortoises developed longer necks than the others:

This is definitely natural selection in action, but not evolution. The possibility for these variations was already coded in the DNA of the tortoises’ ancestors . . .

Since this process generally selects only from genes already available, creationists would expect there to be a limit to this variation. Such a process would not produce a neck as long as a brachiosaur’s, for example. Another possibility is mutation that inhibited a gene which controls growth factors for the neck. Without this control, the necks overgrow somewhat. On the grassless island this information-losing mutations would be beneficial. But with plenty of grass, such a mutation would not be so beneficial since it would waste resources growing a neck longer than required.

So the explanation given here is the loss of a gene limiting neck growth.

What the creationist article fails to address

Surprisingly absent from this creationist article was any mention of indifferent genetic mutation, those variations that are in the vast majority of cases useless or detrimental. It is the occasional one that offers a benefit in certain environments.

This sort of change cannot be seen in a lifetime — except in bacteria. Jerry Coyne and Allen Orr “calculated that, starting with one ancestor, it takes roughly between 100,000 and five million years to evolve two reproductively isolated descendants. . . . It turns out that if you started with a single species 3.5 billion hears ago, you could get 100 million species living today even if each ancestral species split into two descendants [through geographic isolation] only once every 130 million years.” (pp. 194-5 of Why Evolution is True)

Evolution happened. We have the observable evidence for that. Ring species are one observable illustration of how different species can and do emerge across geographic areas. A classic case is the Larus gull — Those in areas 1 and 2, with slight variations, can interbreed, but by the time we pass through the mutations to point 7, the two types, 1 and 7, cannot interbreed. They have become different species. (Given debates about some such traditionally regarded “ring species”, including the larus gull, I am only presenting this one as one illustration of the ring species concept.)

Jerry A. Coyne in Why Evolution is True lists three things that the fossil record shows us:

3. Evolutionary change, even of a major sort, nearly always involves remodeling the old into the new.

There is no reason why a celestial designer, fashioning organisms from scratch like an architect designs buildings, should make new species by remodeling the features of existing ones. Each species could be constructed from the ground up. But natural selection can act only by changing what already exists. It can’t produce new traits out of thin air. Darwinism predicts, then, that new species will be modified versions of older ones. The fossil record amply confirms this prediction. (p. 57) 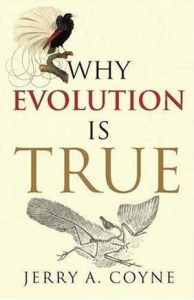 Need I say it?

Given a little history recently of a certain associate professor of religion who demonstrates an inability to rise to the intellectual integrity of some of his peers, including a predecessor by the name of Albert Schweitzer, by lazily opting to associate Jesus mythicism with creationism, it is instructive to compare the creationist style of argument with that of, say, a Doherty, a Price, a Wells, a Thompson even.

On the other hand, as I have demonstrated in previous posts, including my critique of McGrath’s review of Price’s chapter in 5 Views, this scholar does regularly

Does the old proverb of pots calling kettles a darker shade of white, or projection, or something Paul said in Romans about the accuser doing the thing he attempts to project on others, come to mind?