Christchurch, New Zealand, recently experienced a 7+ earthquake. A friend who works in the University of Canterbury library sent me this link to show what half a million books look like when thrown on the floor – – – http://www.canterbury.ac.nz/photos.shtml

One illustration of many in the above link: 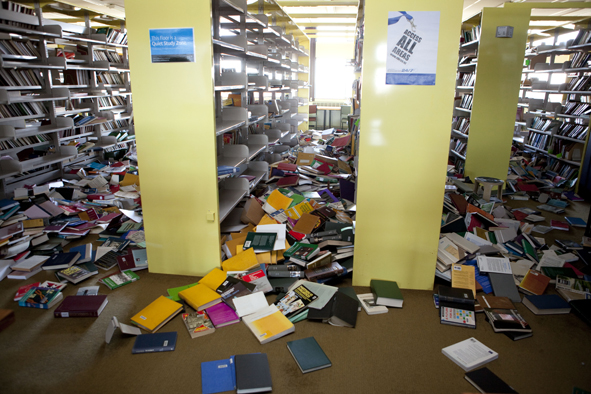 The problem was that the building was deliberately designed to sway in an earthquake. Now whoever thought of that idea obviously hated librarians and/or libraries.

(I’ve never been able to understand why anyone opts to live and work in an earthquake zone!)

I’m a librarian, but I never see or touch a book. I work in a field that seeks to deliver electronic or digital resources to users online. Is it too idealistic to suggest that it might be more economical in the long term that all those scattered books should simply be picked up and scanned to be available electronically now? Stuff the reshelving by going crosseyed trying to put them all back until the next quake. 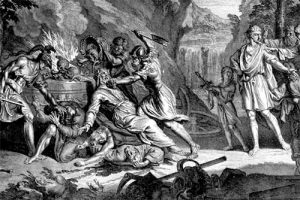 I’ve seen many positive responses to The Bible Unearthed: Archaeology’s New Vision of Ancient Israel and the Origin of Its Sacred Texts by Israel Finkelstein and Neil Asher Silberman, but my own feeling after reading the book was disappointment at the lack of archaeological evidence they cited for their main theme: the Great Reformation of Josiah and his reign as “the climax of Israel’s monarchic history.” These authors dub this period “A Sudden Coming of Age” for the Kingdom of Judah that produced “The Birth of a New National Religion.”

It was during King Josiah’s reign that Finkelstein and Silberman argue that the “defining and motivating text” of the biblical books was composed. The stories of David and others were supposedly modeled on their authors’ propaganda vision of Josiah himself.

This literary “renaissance” coincided with “a new political and territorial agenda: the unification of all Israel.”

After the fall of the northern Kingdom of Israel to the Assyrians, the southern kingdom of Judah was “transformed”. “Traditional tales of wandering patriarchs and of a great national liberation from Egypt” were viewed from a new perspective and came to serve “the cause of religious innovation — the emergence of monotheistic ideas — within the newly crystallized Judahite state.”

But when one looks for the primary evidence they draw on in support of this hypothesis, it strikes me as being so tenuous as to be virtually nonexistent. I see no reason to accept the biblical story as historical, and several reasons to interpret it as fiction. END_OF_DOCUMENT_TOKEN_TO_BE_REPLACED