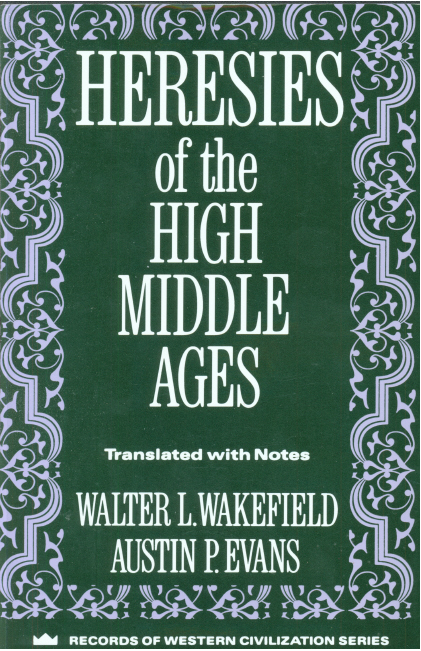 Also, he says that when God inflicts punishments for sins upon His creatures, He does evil and does not comport Himself as God but rather serves His adversary.

Also, he says that when God declares, “I am God and there is no other,” and again, “See that I alone am God,” and the like, repetitiously, then He is influenced by His adversary, for the true God spêaks but once and, as Job says, does not repeat Himself.

Also, he believes that the true God brought about the Flood, destroyed Pentapolis, and overthrew Jerusalem, because of the sins of His creatures; and, to summarize, the true God, provoked by His adversary, brought upon His people Israel all the afore-mentioned evils which they suffered in Judea or in the Promised Land because of the sins which they had committed. So this John says; he also believes that all the events mentioned took place in a certain other world, belonging to the true God.

Also, he believes that the souls who are of God are transferred from body to body and that in the end all will be freed from punishment and guilt.

Also, this John accepts the whole Bible, but thinks that it was written in another world, and that there Adam and Eve were formed.

Also, he believes that Noah, Abraham, Isaac, Jacob, and the other patriarchs, and Moses, Joshua, and all the prophets, and the Blessed John the Baptist were pleasing to God and that they were men in another world.

Also, that Christ was born according to the flesh of the fathers of old, just named, and that He really assumed flesh from the Blessed Virgin and really suffered, was crucified, dead, and buried, and rose again on the third day, but he thinks that all these things took place in another, higher world, not in this one.

Also, that in the aforesaid world, the whole human race incurred death because of sin to which it yielded, sin which this John calls the principle and cause of all evil, as we have repeatedly remarked. And after their bodies were buried in that world, their souls necessarily descended into hell, that is, into this world, and to this hell Christ came down to help them.

Also, he believes that in the upper world will come the resurrection of the dead, namely, that each soul belonging to God will receive its own body.

Also, that in that same world the true God gave the law of Moses to the people we have described. There, also, priests offered sacrifices and burnt offerings for the sins of the people, as their offering is commanded in the Law.

Also, in that same place Christ literally wrought true miracles in raising the dead, giving sight to the blind, and feeding five thousand men, not counting the women and children, from five barley loaves and two fishes.

Why say more? Whatever in the whole Bible is stated to have been in this world he changes to have actually taken place in that other world.

[23] How John of Lugio Wrote a Book about His Errors.—Indeed, the oft-mentioned heresiarch John of Lugio fabricated the blasphemies and errors described above and many others which would take too long and be too disgusting for me to recount. From them he compiled a large volume of ten quires, a copy of which I have. I have read it all and from it have extracted the errors cited above. It is also to be noted especially that this John and his associates do not dare to reveal to their believers the errors described, lest their own believers desert them on account of these novel errors and because of the schism existing among the Albanensian Cathars, of which they are the cause. The Albanensian Cathars censure the Concorezzenses and are in turn censured by the latter.

I’m not sure how some of Sacconi’s account fits neatly with Peter’s in his history of the Albigensian crusade. That someone claiming to have formerly been a member of a heretical group professes to write a true account of their beliefs is not necessarily an indication that everything they say is true. I don’t know what the actual relationship between Sacconi and John of Lugio was, and I suspect some caution is required on the basis of the admission that some of the beliefs described were actually kept secret from all but an inner circle. Does Sacconi’s stress that he has “read the original writings” reassure us or leave us with questions?

Something else of interest, especially for anyone with an interest in word origins:

Throughout France the Cathars were popularly described as Bulgarians. . . . In northern France the popular name for Cathars was Bougres, Bulgarians, which became a term of abuse, passing into English as bugger, because the Cathar perfects were each assigned a companion of the same sex, and this led some of their opponents to make ribald comments.

The things one learns when following the tributaries from a study of the Ascension of Isaiah!

3 thoughts on “Further Details on those Medieval “Christ Mythicists””