This post is based on some of the citations in the early pages of Hercules-Christus, a 1947 article by Dutch  Radical Critic Gustaaf Adolf van den Bergh van Eysinga, translated into German by Frans-Joris Fabri and posted on Hermann Detering’s RadikalKritik webpage. I have supplemented some of van Eysinga’s references in places. Other posts addressing Heracles:

Heracles (Hercules in Latin) in popular imagination with his club, his lion-skin, his twelve labours, his violent, gluttonous and promiscuous character, is so far removed from any conventional idea of Jesus Christ that any suggestion of the possibility of a comparison must seem utterly perverse. But the more I pore over the ancient texts I discern ever more striking overlaps at several levels. I try to imagine myself as an ancient dilettante philosopher familiar with the role of Heracles in a range of literary and philosophical writings and place in various devout and civic observances and wondering how I would respond to my first contacts with the writings about Jesus.

Let’s start with a most outrageous comparison. Jesus was accused of being a glutton and a drunkard.  Mary Marshall in her thesis Jesus and the Banquets and again in a derivative article, Glutton and Drunkard?, points out that such an insult was typically levelled at uninvited guests, at those who had tagged along as friends or hangers-on of the invitee: the point, Jesus was classed with those uninvited guests who had the reputation for overindulgence.

The Son of Man came eating and drinking, and they say, ‘Look at him! A glutton and a drunkard . . .

The Son of Man has come eating and drinking, and you say, ‘Look at him! A glutton and a drunkard . . .

Once, when Ceÿx was celebrating the marriage of one of his children by a feast (γάμος), Heracles, being in those parts, presented himself, an uninvited guest. This was told in Hesiod’s Κήϋκος γάμοs, from which only a few words remain . . . .

The guests I’ve seen here in Admetus’ house have been from everywhere, and I’ve served hundreds. But never have I welcomed to this hearth a guest more rude, more utterly offensive than this one. First of all, he had the nerve to come inside, although he clearly saw my master was in mourning. Once he’s in he lacks the simple wisdom and restraint to take the hospitality that’s offered—he’s aware of this disaster, knows what’s happened! Still, whatever we don’t bring, he asks for. He takes an ivy goblet in his hands and drinks the black grape’s undiluted offspring until the fire of wine has warmed his mind. He garlands his head with pliant myrtle stems and bellows tunelessly. A double melody was heard then: he was belting out his song, with no respect for the sorrows of the household, while we, the servants, wailed for our mistress. . . . It’s only natural that I should hate this guest for showing up at a time like this.

SLAVE. You’ve returned, o dearest Herakles! Come on inside.
As soon as the goddess learnt you’d arrived down here,
She arranged for loaves to be baked and had several pots
Of pea soup boiled for you, got a whole ox roasted,
And had various cakes and breads prepared. Come on in!

INNKEEPER. Plathane, Plathane, over here! Here’s the scoundrel himself,
The person who came to our inn some time ago
And devoured those sixteen loaves without paying.

The gluttony of Heracles, (narrated by his host, Coronus, son of the Lapith, Caeneus):

Two warm bodies of oxen he set in a circle around the embers, bodies crackling in the fire; and then I noted a noise of flesh and a heavy groaning of bones. There was no long time fitly to distinguish it.

Yes, but. Surely Jesus was blameless while Heracles was not. Maybe. We have different narratives about Jesus, not only canonical ones, presenting quite different characters of Jesus. Ditto for Heracles. And there is always room for the learned to rationalize the myths handed down.

To one type of thinker who meditated on the character of Heracles he was in fact the epitome of self-control.

Take Heracles, the best man that ever lived, a divine man, and rightly reckoned a God. Was it wrong-headedness that made him go about in nothing but a lion’s skin, insensible to all the needs you feel? No, he was not wrong-headed, who righted other people’s wrongs. He was not poor, who was lord of land and sea. Wherever he went, he was master. He never met his superior or his equal as long as he lived. Do you suppose he could not get sheets and shoes, and therefore went as he did? That’s absurd! He had self-control and fortitude. He wanted power, and not luxury.

Heracles was the personification of the Logos, of Reason itself. (Logos, of course, is translated most simply as the Word in reference to Jesus in the Fourth Gospel.) Mythical tales accrued to the remarkable person so that exaggerated stories transformed him into a being beyond normal human powers. Some of the mythical tales began as metaphors, symbolic of some otherwise genuinely historical aspect. Imagination had to be kept in check, though… 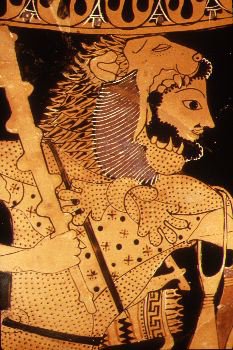 ‘Heracles’ is universal reason thanks to which nature is strong and mighty, being indomitable as well: giver of strength and power to its various parts as well. The name comes, perhaps from the fact that it extends to heroes, and is what makes the noble famous. For the ancients called heroes those who were so strong in body and soul that they seemed to be part of a divine race. There is no need to be disturbed by the more recent story: the son of Alkmene and Amphitryon was deemed worthy of the same name as the god because of his virtue, so that it has become hard to distinguish what belongs to the god from the stories about the hero. The lion skin and the club may have originated with ancient theology and been transferred to the latter – it cannot have seemed right that a good military leader who launched powerful attacks on many parts of the earth would have gone around naked, armed only with wood: rather, then, the hero was decorated with these badges of the god when his services had earned him apotheosis. Both the lion-skin and the club can be a symbol of force and nobility: for the lion is the most powerful of the beasts, the club the mightiest of weapons. Traditionally, the god is an archer, because he extends everywhere, and because even the path of his missiles is somehow unwavering – and it is not an irrational commander who faces his enemies with his trust in weapons like this. The Koans have a tradition that, appropriately enough, he lived with Hebe, as if to make him more perfect in intelligence – as it is said: “The hands of the young are fitter for action, but the souls of the older are better by far.” I suspect that it is more plausible that the service to Omphale refers to him [sc. the god]: through it, the ancients showed again that even the strongest ought to submit themselves to reason and to do what it enjoins, even if its voice (which it would not be extraordinary to call ‘Omphale’) happens to call for the somewhat feminine activity of contemplation and rational inquiry. It is also possible to explain the Twelve Labours as referring to the god, as Cleanthes in fact did. But ingenuity should not always win the day.

One can imagine Cornutus having presented a thesis in his earlier years proposing a study of the sources in order to discern behind them what can be known of “the historical Heracles”. Cornutus was not alone here, though Cornutus did have a reverential view of Heracles closer to the one the fourth evangelist had of Jesus. Other writers clearly distinguished between mythical traditions and historical reality: see the post The Relationship between Myth and History among Ancient Authors for other instances with specific reference to Heracles. END_OF_DOCUMENT_TOKEN_TO_BE_REPLACED