But what if you can’t turn off the TV because you don’t even think it’s there?

What if the materials that train the mind to think in certain ways and to accept alternative realities are not understood by the audience — and perhaps not by the authors, either — to be fictions, at least in the usual sense of that word? (Johnston)

This post is based primarily on the first of two essays by classicist Sarah Iles Johnston exploring why Greek myths captured imaginations so strongly and what made them “real”, even “historical”. We will see that Johnston’s thesis overlaps with M. David Litwa’s in How the Gospels Became History: Jesus and Mediterranean Myths but I will save a more detailed comparison with Litwa’s views when I return to reviewing that book.

Most of us know at least a few of the ancient myths and that’s part of the problem when it comes to understanding how the ancient peoples who believed them heard them. We have books with collections of myths and we read each myth ripped from the context in which it was originally understood.

I do want to suggest that, having fallen into the habit of excising Greek myths from their narratives, scholars have long overlooked one of the most salient and significant features of mythic narratives: their ability to engage their audiences emotionally and cognitively. . . . [T]his habit prevented us from understanding some of the most important reasons that myths were able to help create and sustain ancient Greek beliefs in the gods, heroes, and the divine world more generally . . . .

We will see that Johnston analyses the way Greek myths were able to allow listeners to feel that they were not merely hearing a story that happened long ago but that they themselves “were living amongst the gods and heroes, even if as lesser partners” (p. 190).

To make her case Johnston begins by explaining a very common type of ancient myth that was quite different from Greek myths.  Johnston uses a term that is closely related to magic: “historiola”, meaning “a short mention of an analogous mythical story” (Maas, 37). Example, an Egyptian “historiola” myth:

… Isis came out of the spinning house [at the hour] when she loosened her thread. “Come, my sister Nephthys! See, my deafness has overtaken me! My thread has entangled me! Show me my way that I may do what I know [how to do], so that I may extinguish him with my milk, with the salutary liquids from within my breasts. It will be applied to your body, Horus, so that your vessels become sound. I will make the fire recede that has attacked you!”

While the mother recites these words, she applies her own milk to her child, just as Isis applied hers to Horus. The child’s fever is expected to break, just as Horus’s fever broke.

To take another example: if a baby has a headache, then its mother might invoke the paradigm of “banished headache” by telling of how Christ pushed the Evil Eye off a rock to stop it from giving headaches to another baby, thus “persuading” her own child’s headache to go away as well (Pócs 2009.29, from a Romanian example that is still in use today).

That’s magic, in my view. Repeat a story that happened long ago and in a far-off or far-away “world” and apply it to cause the same thing to happen in the present moment. They are like curse pronouncements. Repeat a formula that draws down the power of the spirits and have them act in this world accordingly.

But that’s not the way it worked with Greek myths. 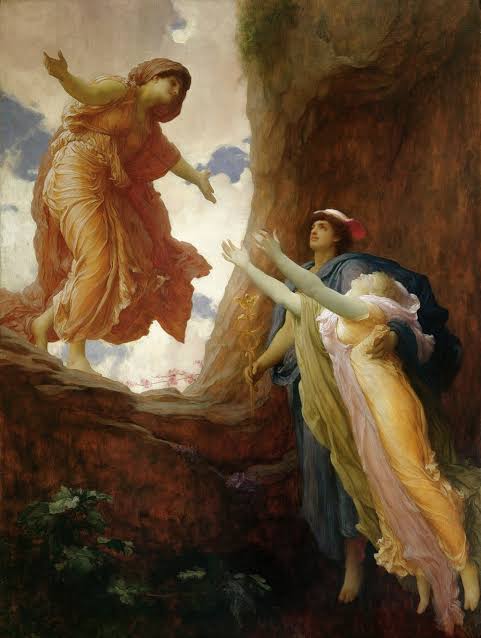 Take the myth of Persephone. In place of a direct cause-effect action between the mythic story and the real world we enter the realm of metaphor:

The story of Persephone’s annual return from the world of the dead, for example, when narrated in connection with the Eleusinian mysteries, was not meant to suggest that initiates into the mysteries would similarly return from the Underworld for a portion of each year after they had died, but rather reminded them that initiation ensured them happier existences down below once they had gotten there. Persephone’s experiences were a metaphor for those of the initiates; the two shared the salient characteristic of being partial triumphs over death but differed insofar as, among other things, although Persephone annually returned to the world of the living, the dead initiates did not. When narrated in connection with the Thesmophoria, the same story metaphorically expressed the celebrants’ hopes that crops would once again rise from the dark earth into which seeds were cast; the two shared the salient characteristic of anticipating the annual return of something desirable but differed insofar as, for example, although Persephone returned each year in her own right, the crops “returned” only in the sense that their seeds generated new plants to replace them (an idea that, in turn, served as a metaphor for the Thesmophoria’s other focus: the successful conception and birth of new human children). The fact that some stories, like this one, could serve as meaningful accompaniments for two different festivals with different primary goals underscores their metaphorical nature: had the relationship between the myths and the rituals I just described been one of straightforward analogy, such double service would not have worked very well.

To understand the point further:

. . . the aim of a traditional historiola, after all, is to cause something in the quotidian realm to pattern itself after something in the mythic realm not in only one or two salient ways but rather as closely as possible.

But Greek myths were not like that. They did not have that sort of magic power; they were not told to produce magical effects in this world.

. . . the deeds described by the myths existed on a continuum that flowed uninterruptedly into the time of the listeners. A well-narrated Greek myth would leave those listeners feeling not that they were repeating paradigmatic actions of the gods and heroes that had been performed eons ago (as is the case with historiolae), but rather that they were living amongst the gods and heroes, even if as lesser partners.

No, the Greek myths were different. They somehow “prepared their audiences to feel as if they were living amongst the gods and heroes.”