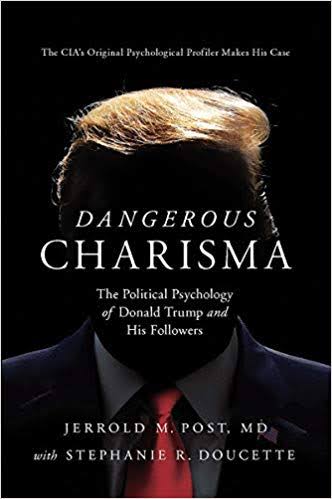 What follows is not an attempt to explain every person who supports Trump. But if the shoe fits, wear it, as the saying goes. What is uppermost in my mind as I read Post and Doucette’s analysis of the dynamic between a certain kind of charismatic leader and his/her followers is my own experience of strong attachment to a cult leader. Does it fit? Does it seem to apply in non-religious settings? I have posted much about the process of radicalization (especially why people join terrorist groups) and found strong similarities in the psychology involved there and the process of conversion to cults. Let’s see what Post and Doucette say about “the charismatic leader-follower relationship”. This post is a survey of their chapter 7. Bolding and formatting are my own in all quotations. Page references are from the electronic version.

The relationship between Trump and his hard-line followers represents a charismatic leader-follower relationship, whereby aspects of the leader’s psychology unlock, like a key, aspects of his followers’ psychology.

Remember the Jonestown massacre. Post and Doucette cite work by Abse and Ulman who studied the psychological dynamic between Jim Jones and his followers.

[I]n times of crisis, individuals regress to a state of delegated omnipotence and demand a leader who will rescue them, take care of them.

I have skipped past Post and Doucette’s analysis of Trump himself so permit me to simply state things will have to be justified in a future post. The idea expressed is that Trump “feeds off the adoration of his followers”. What has led to this type of personality is an “injured self” that finds remedy in the confirmation and admiration of others. Where does an “injured self” come from? Two roads lead to it:

In the second pathway, a very heavy burden can be placed on a child. Expectation of success can generate troubled insecurity. That’s the kind of person who “feels compelled to display himself to evoke the attention of others.” The attention seeker who is never satisfied, who is constantly seeking new audiences for ongoing recognition.

People who are constantly craving attention and admiration do best when they have the ability “to convey a sense of grandeur, omnipotence, and strength.”

And here’s the hard part for many of us:

Leaders such as Trump, who convey this sense of grandiose omnipotence, are attractive to individuals seeking idealized sources of strength; they convey a sense of conviction and certainty to those who are consumed by doubt and uncertainty.

I recall the many stories of fellow members of the cult of how “God called” each of us through some crisis in our lives. We were ready for the taking, experiencing doubts and uncertainty.

Now obviously not everyone who goes through a time of “doubt and uncertainty” is going to join a cult or vote for Trump. But it is a factor for many and it is at those times that most of us are vulnerable:

This was evident in Trump’s support from rural areas and the working class, where Trump’s motto “Make American Great Again” (MAGA) had a strong resonance. Despite his lack of any concrete policy, his tweets concerning “JOBS, JOBS, JOBS” had resonated with many of his followers, especially those who are struggling and feel abandoned by the last administration.

We all see how Trump loves large rallies; even after the election was over he has continued with them. In the cult I don’t think we were disloyal enough to commit the thought-crime that our grandiose leader, “God’s Apostle”, “God’s End-Time Apostle”, was basking in the admiration of his followers even when the stood to applaud whenever he entered and left an auditorium on a speaking tour.

The leader thrives off the admiration of the crowd; his insecurity and self-doubt are buried in it. But the crowds need the leader as much as he needs them.

There is a quality of mutual intoxication for both sides, whereby Trump reassures his followers who in turn reassure him of his self-worth. Even before current rallies, his followers will line up hours early, waiting to fill even sports stadiums that can seat 10,000, continuing to chant “Lock her up!” During the rallies, Trump continues to use his externalizing rhetoric attacking any opponents or focusing on the immigrant crisis, despite calls from fellow Republicans to focus on issues like the economy. But it is this rhetoric that draws in his followers, who chant, “Build the wall! Build the wall!” One can compare it to a hypnotist mesmerizing his audience. But the power of the hypnotist ultimately depends upon the eagerness of their subjects to yield their authority, to cede control of their autonomy, to surrender their will to the hypnotist’s authority.