Back in 2015-2016 I was trying to understand the emergence and character of Islamic State and ended up purchasing and reading four books in particular that appeared to be authored by researchers whose credentials indicated that they should know what they are talking about:

I thought I’d share here with anyone interested what each of those authors had to say about Abu Bakr al-Baghdadi in 2014-2015. I omit the details of Islamic State expansion and focus on al-Baghdadi’s background and rise to lead the Islamic State. (Contrary to what even official state declarations from the U.S. have said, al-Baghdadi definitely was not the founder of ISIS. al-Baghdadi does not enter the story of ISIS until after it had been up and running for about six years.) One facet not brought out in the following extracts is that al-Baghdadi’s vision of an Islamic State caliphate was flatly opposed by Al Qaeda’s leadership. Al Qaeda foresaw that any attempt to establish a territorial caliphate at that time could only face one outcome — total military defeat by Western-led armies. And that’s what happened, as we know. al-Baghdadi was the man to push for such territorial expansion, however, recruiting military leaders from Saddam’s Baathist dominated army. What happens now that Islamic State is both defeated militarily and also having lost the leader who was the force behind that military quest remains to be seen. A reunification with Al Qaeda? A focus on terrorist operations? Eventual dissipation? 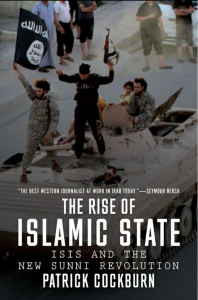 . . . ISIS. Before it captured Mosul and Tikrit it could field some 6,000 fighters, but this figure has multiplied many times since its gain in prestige and appeal to young Sunni men in the wake of its spectacular victories. Its very name (the Islamic State of Iraq and the Levant) expresses its intention: it plans to build an Islamic state in Iraq and in “al-Sham” or greater Syria. It is not planning to share power with anybody. Led since 2010 by Abu Bakr al-Baghdadi, also known as Abu Dua, it has proved itself even more violent and sectarian than the “core” al-Qaeda, led by Ayman al-Zawahiri, who is based in Pakistan.

Abu Bakr al-Baghdadi began to appear from the shadows in the summer of 2010 when he became leader of al-Qaeda in Iraq (AQI) after its former leaders were killed in an attack by US and Iraqi troops. AQI was at a low point in its fortunes, as the Sunni rebellion, in which it had once played a leading role, was collapsing. It was revived by the revolt of the Sunni in Syria in 2011 and, over the next three years, by a series of carefully planned campaigns in both Iraq and Syria. How far al-Baghdadi has been directly responsible for the military strategy and tactics of AQI and later ISIS is uncertain: former Iraqi army and intelligence officers from the Saddam era are said to have played a crucial role, but are under al-Baghdadi’s overall leadership.

Details of al-Baghdadi’s career depend on whether the source is ISIS itself, or US or Iraqi intelligence, but the overall picture appears fairly clear. He was born in Samarra, a largely Sunni city north of Baghdad, in 1971 and is well educated, with degrees in Islamic studies, including poetry, history, and genealogy from the Islamic University of Baghdad. A picture of al-Baghdadi, taken when he was a prisoner of the Americans in Camp Bucca in southern Iraq, shows an average-looking Iraqi man in his mid-twenties with black hair and brown eyes.

His real name is believed to be Awwad Ibrahim Ali al-Badri al-Samarrai. He may have been an Islamic militant under Saddam as a preacher in Diyala province, to the northeast of Baghdad, where, after the US invasion of 2003, he had his own armed group. Insurgent movements have a strong motive for giving out misleading information about their command structure and leadership, but it appears al-Baghdadi spent five years, between 2005 and 2009, as prisoner of the Americans.

After he took over, AQI became increasingly well organized, even issuing detailed annual reports itemizing its operations in each Iraqi province. Recalling the fate of his predecessors as AQI leader, al-Baghdadi insisted on extreme secrecy, so few people knew where he was. AQI prisoners either say they never met him or, when they did, that he was wearing a mask.

Taking advantage of the Syrian civil war, al-Baghdadi sent experienced fighters and funds to Syria to set up JAN as the al-Qaeda affiliate in Syria. He split from it in 2013, but remained in control of a great swath of territory in northern Syria and Iraq.

Against fragmented and dysfunctional opposition, al-Baghdadi has moved fast towards establishing himself as an effective, albeit elusive, leader. The swift rise of ISIS since he took charge has been greatly helped by the uprising of the Sunni in Syria in 2011, which encouraged the six million Sunnis in Iraq to take a stand against the political and economic marginalization they have encountered since the fall of Saddam Hussein.

Note: I wrote this post a few years back and left it lying in the draft pile, unable to come up with a satisfactory conclusion until earlier this year. Our forecast calls for snow tomorrow (something those of us who live in RVs would rather not see), so a post about precipitation and weather prediction might be apt. –TAW

[This post begins our hard look at Chapter 6, “The Hard Stuff” in Carrier’s Proving History. — specifically, the section entitled “Bayesianism as Epistemic Frequentism.”]

In the 1980s, the history department building on the University of Maryland’s College Park campus had famous quotations painted on its hallway walls. Perhaps they still do.

The only quote I can actually still remember is this one:

I used to enjoy lying to myself and say, “That’s me!” But the real reason I never carry an umbrella is not that I’m a naive Yankee optimist, but rather because I know if I do, I will leave it somewhere. In this universe, there are umbrella receivers and umbrella donors. I am a donor.

So to be honest, the reason I check the weather report is to see if I should take a jacket. I’ve donated far fewer jackets to the universe than umbrellas. But then the question becomes, what does it actually mean when a weather forecaster says we have a 20% chance of rain in our area this afternoon? And what are we supposed to think or do when we hear that?

Ideally, when an expert shares his or her evaluation of the evidence, we ought to be able to apply it to the situation at hand without much effort. But what about here? What is our risk of getting rained on? In Proving History, Richard Carrier writes:

When weathermen tell us there is a 20% chance of rain during the coming daylight hours, they mean either that it will rain over one-fifth of the region for which the prediction was made (i.e., if that region contains a thousand acres, rain will fall on a total of two hundred of those acres before nightfall) or that when comparing all past days for which the same meteorological indicators were present as are present for this current day we would find that rain occurred on one out of five of those days (i.e., if we find one hundred such days in the record books, twenty of them were days on which it rained). (Carrier 2012, p. 197)

These sound like two plausible explanations. The first sounds pretty “sciency,” while the second reminds us of the frequentist definition of probability, namely “the number of desired outcomes over the total number of events.” They’re certainly plausible, but do they have anything to do with what real weather forecasters do?

Recently, I came across an article on this subject by a meteorologist in Jacksonville, Florida, written back in 2013. He even happened to use the same percentage. In “What does 20% chance of rain really mean?” Blake Matthews writes: END_OF_DOCUMENT_TOKEN_TO_BE_REPLACED