Some interesting comparisons of the “left’s” and “right’s” use of social media. Again, citing Ferguson et al, with additional detail from Albright:

In the absence of data transparency, we are reserved about all claims by Facebook, Twitter, Google, or anyone else about what ads they did or did not sell or the uses of the sites; we have trouble understanding why several Congressional committees were so slow to require full public disclosure of exact information, especially once the companies admitted that the ads already ran in public. For the same reason, we are cautious about assertions by Trump campaign workers that they did not find Twitter very useful, though that assertion is potentially very telling, since so many more bots are keyed to Twitter, rather than Facebook (LoBianco, 2017).

We take much more seriously the findings of empirical studies of overall election communication patterns by independent researchers who gathered their own data. Jonathan Albright has attempted to map the “ecology” of both left and right networks in several recent studies. His work emphasizes the unusually dense, ramified character of the right wing messaging networks that developed over the last few years:

A Harvard study of the internet in the 2016 presidential election makes a similar point:

“Our clearest and most significant observation is that the American political system has seen not a symmetrical polarization of the two sides of the political map, but rather the emergence of a discrete and relatively insular right-wing media ecosystem whose shape and communications practices differ sharply from the rest of the media ecosystem, ranging from the center-right to the left. Right-wing media were centered on Breitbart and Fox News, and they presented partisan-disciplined messaging, which was not the case for the traditional professional media that were the center of attention across the rest of the media sphere” (Faris et al., 2017).

What’s going on here? Where are the Russians?

26 Note that Breitbart is strongly pro-Israel, as the site explained repeatedly in the wake of Charlottesville. Steve Bannon’s own movies are also quite sympathetic to African-American problems. But these facts hardly exhaust Breitbart or Bannon’s relationships to the substantial segment of the far right that is openly anti-Semitic and white supremacist. See BERNSTEIN, J. 2017. Alt-White: How the Breitbart Machine Laundered Racist Hate. BuzzFeed, October 5, 2017. Cf. also the discussion in GREEN, J. 2017. Devil’s Bargain — Steve Bannon, Donald Trump, and the Storming of the Presidency, New York, Penguin.

By 2016, the Republican right had developed internet outreach and political advertising into a fine art and on a massive scale quite on its own (Faris et al., 2017) (Albright, 2016). Large numbers of conservative websites, including many that that tolerated or actively encouraged white supremacy and contempt for immigrants, African-Americans, Hispanics, Jews, or the aspirations of women had been hard at work for years stoking up “tensions between groups already wary of one another.”26 Breitbart and other organizations were in fact going global, opening offices abroad and establishing contacts with like-minded groups elsewhere. Whatever the Russians were up to, they could hardly hope to add much value to the vast Made in America bombardment already underway. Nobody sows chaos like Breitbart or the Drudge Report, as the New York Times documented in one Idaho town (Dickerson, 2017). 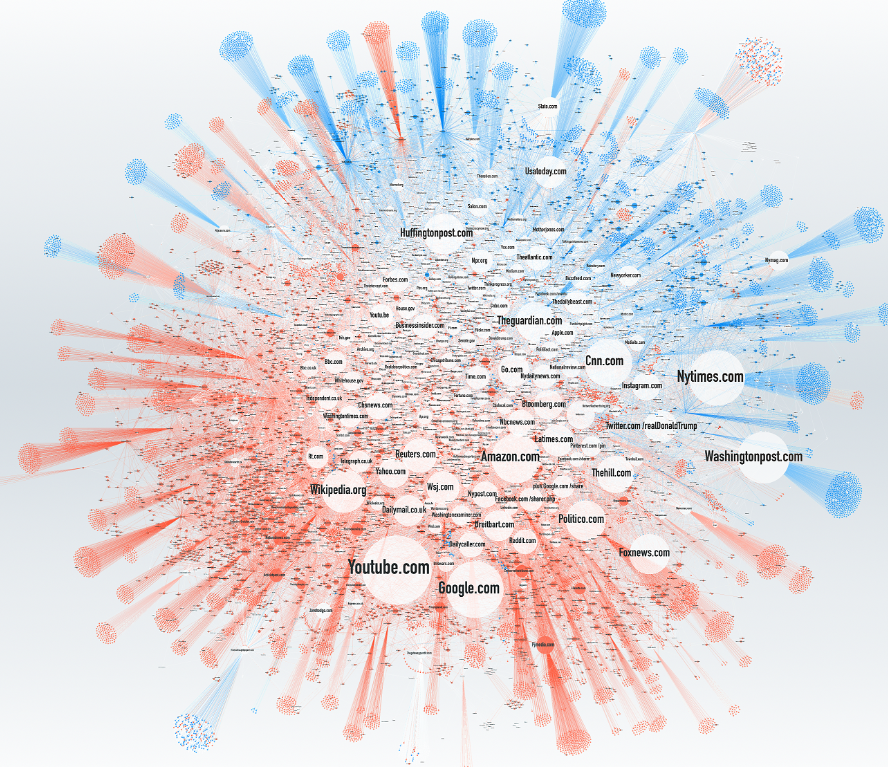 See the original article onsite for the full detail of the above map: https://medium.com/@d1gi/left-right-the-combined-post-election2016-news-ecosystem-42fc358fbc96

With a few exceptions, the unique “left-wing” sites are basically nowhere to be found on the right-wing side of the network. The graph confirms that, at least as far as connections (hyperlinks) go online, much of the major “left-wing” media appear to be isolated from the most active parts of the news ecosystem.

Bottom line is, the right-wing sites appear to be linking heavily into most of the left-wing news media, the major news players, and also to each other. However, the “left-wing” media are not linking into most of the “right-wing” sites. To make matters worse, due to the relative lack of diversity in the left media ecosystem (see my last “macro-propaganda” post), there’s right-wing sites in more places across the network. This must have something to do with the “left-wing” news media/journalism “bubble.”

To make matters worse for the “left-wing” media, the right also appears to be much more active around the “center” of this combined news ecosystem. And what’s the site at the exact center of this L+R network? It’s Senate.gov. NOAA.gov appears to run a close second, though.