Richard Carrier has posted Spencer Alexander McDaniel on the Historicity of Jesus which appears to be a comprehensive response “Was Jesus a Historical Figure?” by McDaniel of the Tales of Times Forgotten blog.

I’ve only skimmed some of Tales of Times Forgotten and can understand Carrier’s high assessment of the overall quality of the blog. His article on the historicity of Jesus, though, indicates that he has uncritically followed the methods theologians and biblical scholars have generally (not in every case) used to ascertain historicity instead of the methods of secular historians as set out by leading lights like Moses I. Finley that I have discussed here. 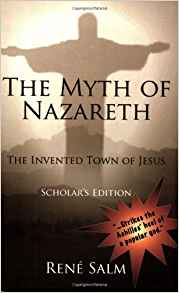 I discovered that [Polish scholar Anna] Oracz has written a review of Rene Salm’s denialist take on the village of Nazareth. Her conclusion is summed up well in this sentence: “anybody seeking an honest evaluation of the evidence in “The Myth of Nazareth” will be disappointed.”

I’ve read The Myth of Nazareth and was surprised that anyone would find reasons to conclude it was a dishonest treatment of the archaeological evidence as published in the scholarly literature. It turns out that the bulk of Oracz’s criticism is over René Salm’s daring to criticize the influence of Catholic Church in influencing the interpretations and (frequently poorly supported) claims of archaeologists with obvious Christian sympathies. As for being disappointed, I was disappointed that the review simply skipped over the bulk and substance of Salm’s book and made no comment about any of the evidence it cited to demonstrate its case as well as the flaws in many claims of archaeologists funded by churches and the tourism industry of Israel. The closest Oracz appeared to come to a specific criticism to refer to the chapter titles (none of their content) and to a comment he made on one archaeologist’s grammatical slip:

In discrediting the Christian point of view Salm is resorts to different means. For instance, the author points out a grammatical mistake in Bagatti’s work. After quoting a passage from the Christian archaeologist, he writes:

We note, first of all, the incorrect English grammar. The subject is plural and the two examples are given, but the verb is singular (p. 113).

A more informative comment would have cited Salm’s more critical analysis when he wrote those words:

“Indeed, Bagatti corrects Richmond’s error, but he still mentions the word “Hellenistic” upwards of a dozen times in his Excavations — rarely, however, in connection with identifiable evidence. A careful review of his tome shows that there are astoundingly few artefacts involved:

This is a second surprise. We note, first of all, the incorrect English grammar. The subject is plural and two examples are given, but the verb is singular. It is of no moment whether the faulty grammar is due to the author or to the translator, for — since Bagatti nowhere claims Hellenistic structural remains — we here have the remarkable admission that the entire Hellenistic period at Nazareth is represented by only two pieces: an oil lamp nozzle, and number “2 of Fig. 235.” In contradiction to the above statement, a careful review in fact shows that Bagatti alleges other Hellenistic shards in his Excavations.[234] He has evidently ignored these latter instances in his above summation which concludes his book. Certainly, two pieces are precious little upon which to base the existence of a village. Apparently, however, they constituted the sum total of pre-Christian evidence at Nazareth as of 1967, the publication date of Excavations (Italian edition). Such staggering importance is therefore placed on “the only pieces” from Nazareth witnessing to Hellenistic times, that they merit the most careful scrutiny.”

Only in the second last sentence does the reader get a hint of what has been missed in the review:

Nevertheless, in my opinion this book is interesting because its points out the problems which could arise with the interpretation of the archaeological data from the hometown of Jesus.

If we read only McGrath’s comment we would be left with the impression that Salm is some sort of dishonest denialist.

I think a more appropriate word in place of “honest”, given the content of Oracz’s review, would have been “disinterested”. I am not aware that anyone has been able to substantiate any charges of “dishonesty” in Salm’s study.

But anybody seeking an honest [disinterested] evaluation of the evidence in “The Myth of Nazareth” will be disappointed.

Salm certainly approaches his survey of the archaeological publications with a clear interest to be alert to where orthodox biases have led to misleading, sometimes incorrect, claims about the evidence for a village of Nazareth in the Second Temple era.

(Oh, and Oracz even cites Vridar to support her claim that Salm’s book “provoked a lively discussion”. Someone notices us here!)

One interesting detail in McGrath’s post — he writes of “mythicists”:

All of them have an anti-religious bent, whether it be Communist or modern online atheist opposition to religion in general . . .

Now that is simply not true. Thomas Brodie? Timothy Freke? Peter Gandy? Herman Detering? Paul-Louis Couchoud? Arthur Drews? Tom Harpur? Robert M. Price? Edward van der Kaaij? Francesco Carotta? Even René Salm . . . .  from what I see they have all sought to promote what they consider to be a higher form of spirituality or religiosity than anything that relies upon literalist dogmatism.

(Not that I think there is necessarily anything wrong with an anti-religion bias — so long as one expresses it honestly, with understanding, tolerance, and with the best information one can acquire. You know, like, with the mindset that says “there but for the grace of buddha, krishna, allah, yahweh and elvis go I”)

I am on a slow, slow road to restoring images to vridar posts that have lost them and I would like to ask anyone who has some spare time on their hands to let me know if they find any posts with clear indications that images are missing between 2006/11/20 (Hezbollah not a terrorist organization & In Search of Ancient Israel) up to 2007/06/29, (10 Characteristics of Religious Fundamentalism). I have done that time span as my first batch but would not be surprised if I’ve missed some.

I’m still working on the categories and tags. It will take a while but if I live long enough with my faculties in tact I think it will be done. Thank you for your help — it was good to see several suggestions offered and these have led me to think some things afresh.

Many thanks to all.