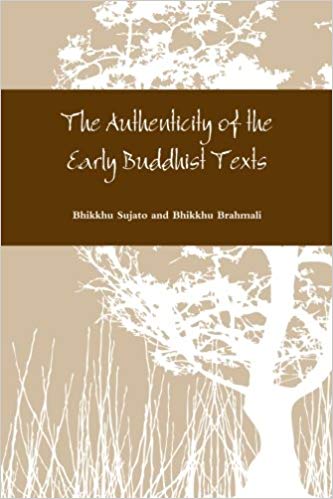 It’s a human thing. Not limited to one religious heritage. I’m talking about the foibles of scholarship as it delves into its own heritage.

So we have the language of apologetics being used where it does not belong. Recall a post that detoured into a discussion of confessional language in scholarship. Recall some of the examples of this evangelical rhetoric:

Alas, the idea that a messiah killed by crucifixion . . . . would be shocking to first-century Jews is still alive and well.

At the very least, however; Paul’s primary emphasis in relation to Christ represents something utterly remarkable. For Paul had found the early Christian proclamation of the crucified messiah completely abhorrent . . . .

. . . . an unprecedented and momentous innovation in traditional Jewish liturgical practice.

And so forth. But Christianity is not alone. The following is found in a Buddhist publication:

It took an astonishing energy and dedication to create and sustain this literature. It must have been produced by an extraordinary historical event. And what could this event be, if not the appearance of a revolutionary spiritual genius? The Buddha’s presence as a living figure in the [early Buddhist texts] is overwhelming and unmistakable.

Then there is this claim attempting to put a study arguing for the authenticity of very early Buddhist texts reliably scientific:

Is that true about the grounds for scientific conclusions? I’m not so sure.

Then we read of the conditions that are laid down for any opposing argument:

Anyone wishing to establish the thesis that the [early Buddhist texts] are inauthentic needs to propose an explanation that accounts for the entire range of evidence in a manner that is at least as simple, natural, and reasonable as the thesis of authenticity. To our knowledge, this has never even been attempted. Rather, sceptics content themselves with picking holes in individual pieces of evidence, which merely distracts from the overall picture, and discourages further inquiry. Their methods have much in common with denialist rhetoric (see section 7.4).

That sounds awfully like an apologist saying that any proposal for Christian origins has to be as simple as the thesis that the disciples of Jesus believed he was the messiah and that he had been resurrected and persuaded others to believe the same. There is a difference between simple and simplistic.

But how familiar is that term of denigration to describe sceptics: “denialists”. They pick holes in the details instead of accepting the big picture of the apologist’s scenario. That to me sounds like the rhetoric that seeks to warn others off from being too careful with the details.

[O]ur thesis does not depend on individual details, but on the persuasiveness of the bulk of the arguments taken as a whole. We are dealing with events over two millennia ago, so it is of course possible, if not trivial, to cast doubt on any individual detail. It is only when the facts are seen together as contributing to a coherent narrative that they become compelling.

If it is possible to cast doubt on any “individual detail” then how is it possible to have critical confidence in the larger thesis that is necessarily founded on all of or most of those details? Again, do we hear echoes of the apologist’s “persuasive narrative” set over against those who find some value in examining its respective parts?

The thesis of the paper is set out in five points, with number five being

That the denial of authenticity is a product of excessive and unreasonable scepticism, not evidence.

Now there is a very clear and distinct echo. Hyperscepticism is the villain. The “hermeneutic of suspicion” has no place in a legitimate study. False dichotomies are set up. Does that mean we need to treat the texts as if they were flesh and blood persons to whom we show love and acceptance in all they say? Apparently so, just as Bauckham and so many others assert — we must indeed accept the claims of a text and only set them aside if we find very good reasons not to “believe”.

Most of the [early Buddhist texts] state explicitly that the Buddha is their author. The character of the [early Buddhist texts] is most easily accounted for if this is, on the whole, true. There are obvious exceptions, such as where the speaker is specifically said to be someone else, or where there are indications that texts or passages have been added. These exceptions, however, should not be allowed to distract from the overall picture.1

1 Gombrich says: “But our initial working hypothesis has to be that the text is telling the truth, and in each case where we do not believe it, or doubt it, we must produce our reasons for doing so.” [1, 96–97]

Then there are the false analogies that we have found so often among scholars of the historical Jesus or early Christianity. Here’s one:

For example, consider the frequent evocations of “God” by American politicians. Do we assume that, if we are professionally agnostic towards the existence of a creator deity, we have no grounds for knowing whether any statements by that politician are true? Of course not. We take their religious beliefs as religious beliefs, and do not expect to find hard evidence for them. And we evaluate their factual claims by reference to knowable facts, just as we would do for anyone else.

Towards the end of the paper we return to some of the above key points:

A good theory is able to account for a large number of facts with a small number of assumptions. The [theory of authenticity] is based on the simple, rational assumption that the [early Buddhist texts] attributed to the Buddha were largely spoken by him, unless there are good reasons to believe otherwise.

By way of comparison, it is difficult to work out exactly how the [theory of inauthenticity] proposes to explain the existence of the Buddhist texts.

It all looks so very, very familiar.

Similarly, while we cannot say with any certainty that any specific text was literally spoken by the historical Buddha, we can say with a high degree of probability that the texts as a whole stem from him. This distinction is one of the rhetorical fault lines in the discussion of authenticity. Sceptics assert that we can’t know for certain whether any specific phrase was spoken by the Buddha, while advocates affirm that the doctrinal teachings as a whole must come from him. While the sceptical assertion is true, it is trivially so, and has no real effect on our understanding of the status of the texts.

That first line reminds me of James Crossley arguing that we have accept that Jesus said certain things because of the “general tone” of the words attributed to Jesus throughout the gospels. All of that study of the Jesus Seminar into which ones are authentic can be tossed into the bin unread.

Again, we see “sceptic” and “scepticism” being reduce to something negative, something bad. The following footnote underscores this characterization:

The sceptical arguments bear more in common with denialism than with science.

Critics of Early Buddhism have adopted a rhetoric of scepticism in order to dismiss the notion of authenticity. Their arguments are apparently intended to be hard-nosed and unsentimental, but when examined closely they are reminiscent of arguments by denialists of various types, such as those relating to the harmful effects of tobacco, creationism, or the reality of man-made climate change. Just as sceptics characterise the search for authenticity as “Protestant Buddhism”, it seems appropriate to describe this form of scepticism as “Denialist Buddhism”.

The opening sentence above carries lots of baggage. Sceptics are said to be sceptical of Buddhism itself, not merely sceptical of traditional dates assigned to texts. They use a “rhetoric” which implies that their arguments are shallow, like those of the clever sophists. And they are said to have an intent, a motivation, to “dismiss the notion of authenticity.” Thus they are denied any semblance of intellectual integrity.

Further, as we continue to read, they are “extreme” and “unreasonable”, and to be compared with unethical tobacco companies:

The unifying characteristic of the various forms of denialism is their insistence on extreme, unreasonable scepticism regarding any truth claims they oppose. The following quote is from a tobacco industry executive, but it might just as well describe the fundamental principle of the sceptics of Early Buddhism.

“… we are committed to an ill-defined middle ground which is articulated by variations on the theme that ‘the case is not proved.’ ”7

And of course the nihilism of postmodernism cannot be spared either. They are even depicted as (intellectually) genetically tainted. They are the ones who oppose true science and are compared with climate change deniers and creationists. They stand opposed to the “true belief”:

There are genuine epistemological problems in the study of Early Buddhism; in that we can all agree. But to argue, as the denialists do, from epistemological uncertainty to dismiss the entire field, is to get everything backwards. To study Early Buddhism is to study the origins of one of the great spiritual movements of humanity.

That last line above embeds the rhetoric of the evangelist and pits sceptics as opposed to all that is genuinely  good about Buddhism.

But the boot has not finished its work yet. We are next given a list of characteristics that are said to apply to these sceptics. One can perhaps even be reminded of some of those New Testament letters that list all of the sins of evildoers in the last days. See how many of the following you recognized from debates in the field of biblical studies:

Ah yes, the old charge that their arguments necessarily imply or suggest some dark conspiracy!

As for #3, here is the explanation:

Critics point to the absence of early manuscripts [6, 1, 3, 27], or the absence of specific details in the archaeological record, such as early evidence of monasteries. . . .

Inference, when properly used, does not rely on a chain of uncertain claims, one after another, diminishing in probability when compounded; but on the convergence of multiple lines of reasoning and evidence that independently confirm the result.

That first paragraph could be applied to the accusations leveled at the “minimalists” among historians of “biblical Israel” who took the material evidence in the archaeological record as their starting point.

And that convergence of multiple lines of reasoning is likewise too familiar. Lots of fallacious or uncertain arguments are not likely to be more valid than any single one of them.

The conclusion sums it all up:

We know when the Buddha lived, where he lived, who he associated with, how he lived, and what he taught. We know these things with greater certainty than for almost any other historical figure from a comparable period. And we know this because of the [early Buddhist texts]. All other historical and archaeological information about the period depends on the [early Buddhist texts] to make sense.

That sounds very much like some of the early opponents of “minimalism”: We know more about David (or Jesus?) than “almost any other historical figure from a comparable period.” All we need is a hermeneutic of charity towards the texts, even over and above any other evidence, including archaeology.

The final paragraph even contains a confession of a true believer:

By encouraging the study of the [early Buddhist texts], we believe more people will be moved to apply these teachings and test them in the only way that the Buddha cared about: to reach the end of suffering.

Just like we read in so many scholarly works related to the Bible and Christianity. There is nothing new or unique under the sun.

21 thoughts on “Scholars of Christianity are Not Alone”