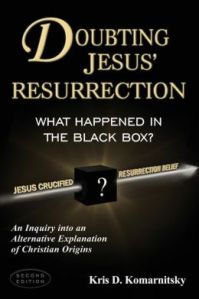 Matthew Ferguson once again has an interesting post that serves as an apt sequel to my previous post on the meaning of martyrdom among pre-Christian era Judaeans: The Rationalization Hypothesis: Is a Vision of Jesus Necessary for the Rise of the Resurrection Belief?. It is a guest post written by Kris Komarnitsky, author of Doubting Jesus’ Resurrection.

Komarnitsky writes from the position of acceptance of the historicity of some form of belief in Jesus’ resurrection arising among his disciples (as distinct from my own view that there is no methodological justification for assuming a “historical core” behind our gospel narratives or a gospel narrative behind 1 Corinthians 15) when he introduces the question:

The conviction that Jesus was raised from the dead is found in the earliest evidence of Christian origins and appears to have come about almost immediately after Jesus’ death. How does one account for the rise of this extraordinary belief if the later Gospel accounts of a discovered empty tomb and corporeal post-mortem appearances of Jesus are legends, as many scholars believe is the case?

Subheadings give an idea of what to expect (I have not yet had an opportunity to more than quickly skim the article):

It looks like a significant contribution to further testing of various hypotheses accounting for Christian origins.

I have been critical of the cognitive dissonance theory to explain a historical turning point leading to Christianity but Komarnitsky obviously explores this psychological explanation in a depth that I have not considered before. Some of his points coincide with the reasons I have dismissed the validity of the theory, but he adds so much more that I have yet to read more carefully and consider. From what I have noticed at this point, some of the data and proposals of Komarnitsky may well have a relevance to alternative modes of Christian origins, that is, even apart from a historical background to the gospel resurrection narratives.

Almost at random, some interesting passages that I have noticed by chance:

The answer to the second question – why did the Messiah have to die – could have been formed from Jewish beliefs about measure-for-measure recompense and vicarious sacrifice when dealing with God. An example of such beliefs can be found in the aqedah story, Abraham’s near-sacrifice of his son Isaac in return for God’s blessing and favor (Gen. 22.1-19). By the first century, this story had become embellished to emphasize that Isaac was a willing sacrifice: “[Isaac] was pleased with this discourse.…So he went immediately to the altar to be sacrificed” (Ant. 1.13.4).

These new beliefs were a creative interpretation and reconfiguration of Jewish beliefs about measure-for-measure recompense and vicarious sacrifice when dealing with God, great prophets ascending to heaven, the final immortal body, the state of existence of souls in heaven, and possibly Jesus’ apocalyptic teachings and some minor Hellenistic influences.

However, once one integrates cognitive-dissonance-induced rationalization into the bereavement vision hypothesis, the question posed by this article logically follows: Is a vision of Jesus even necessary for the rise of the resurrection belief?

I look forward to engaging with the post as soon as opportunity permits.