I have posted many times on the works of scholars who have argued that none or very little of the Hebrew Bible can be dated before the Persian or Hellenistic periods: Thompson, Lemche, Davies, Whitelam, Gmirkin, Wajdenbaum, Wisselius, Mandell & Freedman(?) and possibly others whom memory fails at this moment. So what does the “other side” have to say about it all? Two scholars, Ronald Hendel and Jan Joosten, introduce their opposing arguments on Bible and Interpretation:

How Old Is the Hebrew Bible?

Their book is How Old Is the Hebrew Bible? A Linguistic, Textual, and Historical Study. They state

Many scholars largely disregarding linguistic data insist that most or all of the Hebrew Bible was written in the second half of the first millennium BCE, during the Persian and/or Hellenistic periods, and draw the inference that there is little or no historical content that predates this era. The history of ancient Israel from roughly 1200 to 500 BCE, they say, has little or nothing to do with the biblical accounts. The conflicts among the different scholarly positions – often caricatured as minimalists, maximalists, and meliorists – have become familiar features of the scholarly landscape.

Our book brings together different bodies of evidence to show that the age of the Hebrew Bible can be ascertained to a reasonable degree by integrating the fields of historical linguistics, textual criticism, and cultural history.

A first thought that comes to mind is the problem of circularity. But I don’t know the relevant languages and have not seen the details of their case. Perhaps others with more knowledge can weigh in with a comment or two.

(What and who are the meliorists?) 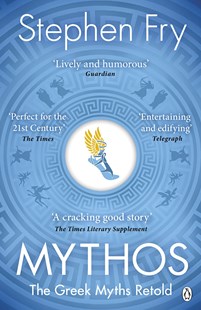 From Stephen Fry’s Mythos (which I have just finished reading)

The one website I would most heartily recommend is theoi.com – a simply magnificent resource entirely dedicated to Greek myth. It is a Dutch and New Zealand project that contains over 1,500 pages of text and a gallery of 1,200 pictures comprising vase paintings, sculpture, mosaics and frescoes on Greek mythological themes. It offers thorough indexing, genealogies and subject headings. The bibliography is superb, and can lead one on a labyrinthine chase, hopping from source to source like an excited butterfly-collector.

I suppose a professional writer has to select a topic and style that is going to attract readers and an editor is paid to lure those readers with alarmist headers, so we should not be too surprised to read in this month’s Christianity Today

How to Defend the Gospels with Confidence

Questions about their reliability deserve better than sheepish mumbling

Attention all readers who need to defend the reliability of the Gospels boldly. Can it really be that 250 years after Voltaire and Hume people still see themselves in need of honing their defences against . . . .?? Against what, exactly?

Last month, Harvard psychologist and atheist public intellectual Steven Pinker posted this provocative tweet: “As any Jew knows, there is controversy (to put it mildly) over whether Jesus was the messiah. But did he exist at all? A new book by R. G. Price argues, ‘Deciphering the Gospels Proves Jesus Never Existed.’”

So that’s it. Against “provocation” in the form of a tweet.

So that’s it? For someone to publish their that Jesus may not have existed is considered…. disturbing, insulting, offensive, inciting…?

But it gets worse. The author holds a doctorate from Cambridge University:

Rebecca McLaughlin holds a PhD from Cambridge University as well as a theology degree from Oak Hill Seminary. Her first book, Confronting Christianity: 12 Hard Questions for the World’s Largest Worldview, will be published by Crossway in 2019.

Part of me thinks, “I did not think it possible for a Cambridge educated PhD to consider different viewpoints about Jesus “provocative” or “insulting” or “disturbing”.” But then I am reminded of my own past life living in a double-bind, in cognitive dissonance, so I know it can and does happen.

Notice something, though. The next paragraph says

This comment garnered well over a thousand likes and 600 shares. This, despite the fact that the book Pinker highlighted was self-published by someone without the relevant scholarly credentials. Its thesis is historically laughable. But the takeaway is one that even a highly educated atheist like Pinker will gladly swallow and propagate. Posts like this reinforce the popular idea that Jesus is a flimsy, semi-mythological character—wearing sandals for sure, but without any clear historical footprint.

We Christians know better. Or do we?

Ah. There it is. The “we-them” world-view. And what was the offence? It was a thesis that is described as “historically laughable”. There is no reference to any particular argument behind the thesis. One may fairly assume that Rebecca McLaughlin has not read the book Pinker found interesting enough to  tweet about. The arguments are clearly so irrelevant that they are not worth looking at. All that is needed is a few disparaging words about the author and scoffing way of telling readers that the thesis cannot be taken seriously.

From that paragraph McLaughlin segues into a review of a book titled Can We Trust the Gospels by Peter J. Williams.

This is a PhD from Cambridge, a full 250 years after the heyday of the Enlightenment, telling a flock she fears may be overly “sheepish” to laugh mockingly (or “historically”, whatever that meant in context) at a different view and respond not by understanding the arguments for the “provocation” but by reading good arguments that can be used to strengthen one’s “defences” against “the other”.

As for myself, when I read R.G. Price’s book (the subject of Pinker’s tweet) the last thing on my mind was how believers would respond to it. I presume believers have no interest in such books. I never for a moment saw the book as “provocative”. I simply saw it as a presentation of an interesting argument for a new way of reading the gospels. To have a new way of understanding what the gospels were all about is something I normally find interesting. I certainly don’t see the exercise as part of some warfare against believers.

It seems that not all believers view new ideas the same way.

Anyway, what did McLaughlin have to say about this book that equipped believers to boldly defend their faith in the gospels?

There is the usual (tiresomely predictable) introduction with Tacitus, Josephus, Pliny the Younger and the “would have beens” (as in Jesus family would have been known by Church leaders….

I have finally concluded that apologists who continue to write such nonsense about late first and early second century historians have no interest at all in what historians of ancient Rome have to say about such sources, even less what those of us on the “other side” have to say about them, and that the reason for repeating the same dot points in a new publication is to maintain a ritual. Rituals are comforting, I suppose.

Then there is this other piece of irrelevance:

Turning to the Gospels themselves, Williams argues that Jesus’ life produced more detailed and better-attested accounts than the contemporary Roman emperor Tiberius, “the most famous person in the then-known world.” While the earliest surviving manuscripts describing Tiberius’s life date from the ninth century, the earliest surviving incomplete copies of the Gospels are from the second and third centuries, and we have complete copies of all the Gospels from the fourth.

Where Williams’s book comes alive for a more seasoned reader is in sections showing how the Gospels drip with local detail.

Detail! Such detail. There is even a subheading:

Just like detail-dripping works Homer, and Virgil, and Juvenal, and Petronius…. and Vardis Fisher:

The first course, the gustatio or appetizer, included oysters, eggs, mushrooms, all saturated with a sauce of sweet wine mixed with heavy amber honey. Among the tidbits were tongues of flamingoes and other birds, the flesh of ostrich wings, breast of dove and thrush, livers of geese, and a concoction of sow-livers, teats and vulva in a thick syrup of figs. Of the main dishes he managed to taste chicken covered deep with a sauce of anise seed, mint, lazerroot, vinegar, dates, the juices of salted fishguts, oil and mustard seed. There were many kinds of fish, all heavily spiced, rich and dripping; thrush on asparagus; a pastry of the brains of small birds; sows’ udder floating in a thick jelly that smelled of coriander; roast venison, pig, fowl and hare; and innumerable sausages and pickled or spiced meats. A dish in great demand was a jelly of sow-livers that had been fattened on figs, an invention of Apicius, a famous gourmet under Tiberius.

Now that’s dripping with detail. It is from the opening pages of a modern novel set in imperial Rome.

The gospels are so “very Jewish”, so that adds to their reliability for some reason. And the fallacy laden (“dripping with logical fallacies”) book of Richard Bauckham’s Jesus and the Eyewitnesses is called in as an expert witness, as seems to be routine nowadays among gospel apologists.

McLaughlin suddenly seems to become a little “sheepish” herself when she seems to be suggesting that Williams even argues for the historical truth of the virgin birth. She doesn’t say it outright, but what else are we to conclude when she “sheepishly mumbles” something about Williams’ claim that such a detail could not be introduced into the church in the early days because Jesus’ family, mother in particular, no doubt, were still alive to refute the claim; but then it couldn’t be introduced later, either, because by then all the traditions had been settled and set so anything new at that stage would be suspect.

The part that disturbs me about Rebecca McLaughlin’s article is that the sentiments she expresses, the scoffing at an idea combined with disregard for finding out anything about its arguments, the ad hominem denigration, ….. they are not confined to lay people or clergy, are they. One might just as easily think one is reading something by a biblical scholar in a theology or divinity department at a public university. Now that’s a thought ought to be provocative.

McLaughlin, Rebecca. 2019. “How to Defend the Gospels with Confidence.” ChristianityToday International, January. https://www.christianitytoday.com/ct/2019/january-web-only/peter-williams-can-we-trust-gospels.html.