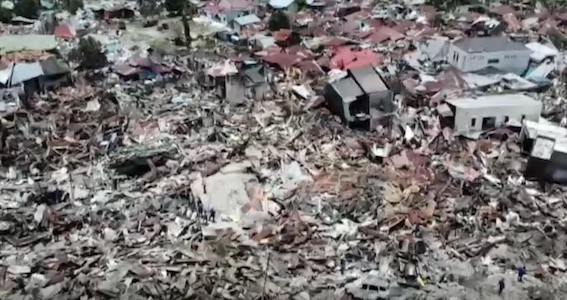 Nearly a week ago I was horrified enough to post Sulawesi, Indonesia.

Since then the scale of the calamity has not disappointed our worst fears back then. The better part of whole villages and towns demolished by the tsunami, inland whole villages effectively sunk in mud and sinkholes from the quake, access roads cut off. People who were days ago heard from beneath the ruins are now silent, dead. There is now talk of simply covering over whole urban areas and declaring them mass graves.

As for the damage caused by the tsunami, we have learned that one of the warning monitors set up to warn of such an impending disaster after the 2004 tsunami had been broken for a very long time and reportedly no money had been available to repair it.

Tonight I heard a relief worker remind us that Indonesia has “only been a democracy for 20 years” — it used to be under military dictatorship — so that who is in charge of what is still a bit “higgledy piggledy”. The most basic aid is still, a week later, to reach many of the worst hit areas.

Indonesia tsunami: Balaroa and Petobo face being turned into mass graves after earthquake

3 thoughts on “This is serious, unspeakable”