But how valid are the dates assigned on those palaeographic script charts? Not all scholars accept that recalibration as the final word.

A first observation is that the small number of decades separating mid-first century CE from the time of Herod is barely greater than acknowledged  margin of error, but that is not the important point.

The important point is the circularity in which scribal hands of texts from Qumran’s caves were defined after 1951 as dated as late as the first century CE because those defining the palaeographic sequences believed Qumran scroll deposits at the time of the First Revolt had been firmly established archaeologically. No information in the years since has materially altered this epistemological circularity. Radiocarbon dates on Qumran texts that have been done until now have not altered this picture.

— Doudna, Gregory L. 2017. “Dating the Scroll Deposits of the Qumran Caves: A Question of Evidence” in The Caves of Qumran: Proceedings of the International Conference, Lugano 2014, edited by Marcello Fidanzio. Brill, Leiden, Boston.

It was believed that a script belonged to the time of the Jewish revolt (66-70 CE).

Therefore the script was formally dated in the chart to the time of the Jewish revolt.

And the chart thereby became the standard for dating the scripts. 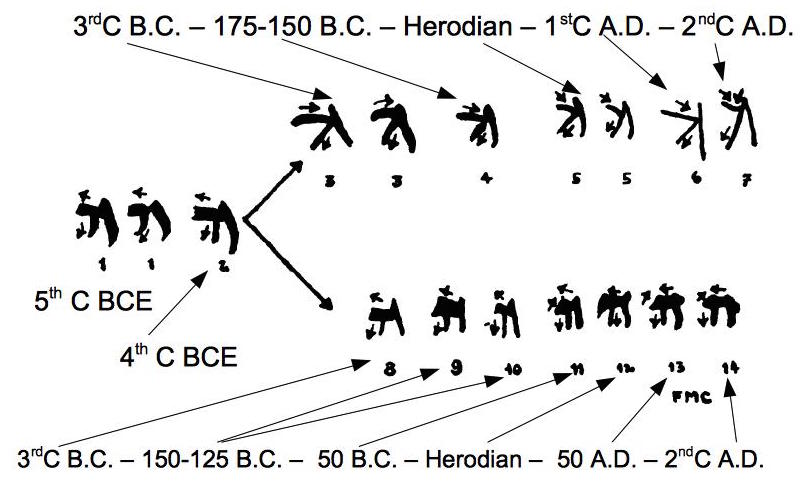 In a future post I will set out in more detail than previously the evidence that would seem to me to knock out of the water this neat alignment of scripts with those dates.

For those interested in the allusion above to problems with radiocarbon dating of the Dead Sea Scrolls. . . .

Space limitation prevents discussion here of radiocarbon datings (see Doudna, “The Sect,” 108–112) [– also posted on Bible and Interpretation]. Suffice it to say that the existence of first-century CE Qumran texts can be established through radiocarbon dating in really only one of two ways.

First, by obtaining individual Qumran text radiocarbon dates whose calendar date possibilities after calibration entirely postdate first century BCE at 95% confidence and exclude (by rechecking) that those results are from statistical variation or a contaminated sample.

Or second (requiring a greater number of datings and a higher order of statistical analysis), by obtaining enough repeated radiocarbon dates of Qumran texts whose calendar date possibilities after calibration entirely postdate first century BCE at the weaker but narrower 68% confidence interval, even if first century BCE is not excluded at 95% confidence in any of the individual datings.

Neither of these criteria have been met in the existing radiocarbon data. A reasonable assessment of the existing radiocarbon data is that of J. van der Plicht and K. Rasmussen: “The dates suggest a possible range from the third century BC to the first century AD for texts from caves near Qumran, with a strong concentration of probable dates in the second or first century BC” (Johannes van der Plicht and Kaare L. Rasmussen, “Radiocarbon Dating and Qumran,” in Holistic Qumran: Trans-Disciplinary Research of Qumran and the Dead Sea Scrolls; Proceedings of the NIAS-Lorentz Centre Qumran Workshop 21–25 April 2008 [STDJ 87; ed. J. Gunneweg, A. Adriaens, and J. Dik; Leiden: Brill, 2010], 111).

Doudna, Gregory L. 2017. “Dating the Scroll Deposits of the Qumran Caves: A Question of Evidence” in The Caves of Qumran: Proceedings of the International Conference, Lugano 2014, edited by Marcello Fidanzio. Brill, Leiden, Boston.

5 thoughts on “The Dates of the Dead Sea Scrolls”